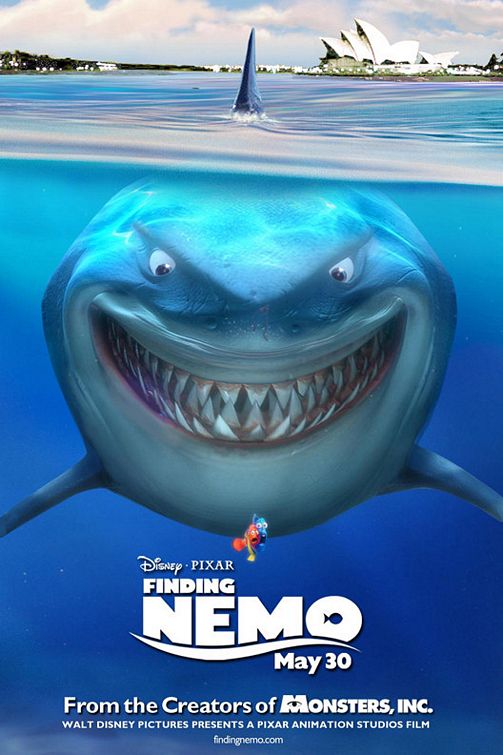 FINDING NEMO is a wonderful animated adventure about a small clownfish who goes in search of his son, who's been put into a fish tank by human beings. Every second of FINDING NEMO is beautifully animated, spectacularly directed and written with great heart and strong moral values.

FINDING NEMO is a whale of a tale about a small clownfish and his son that catches the audience immediately – hook, line and sinker. It is a great fish story that captures your heart, your mind and your soul and will hold viewers breathless until the fantastic “fin-ish.”

The movie starts with Coral and Marlin, voiced by Albert Brooks, lovingly preparing their new anemone home among the beautiful coral reef off of Australia. Coral asks why they need such a big home, which is obvious when they look lovingly at the 400 eggs about to hatch. Marlin wants to name half of them Marlin, and the other half Coral. Coral wants to name them Nemo, so Marlin agrees to name one of them Nemo. Suddenly, a barracuda appears. Marlin and Coral try to fight it off, but when Marlin wakes up, it is only Marlin and one little egg left, whom he names Nemo (Alexander Gould).

Marlin says that he will never, ever let anything happen to Little Nemo, who, it turns out, has a stunted fin. Sometime later, when Marlin takes Nemo to school, Nemo disobeys and swims off to investigate a boat, which the other little fish mis-pronounce as “butt.” A diver appears and captures Nemo. Suddenly, Marlin has lost his son.

Nemo gets taken to a fish tank in the diver’s office. The diver is Doctor Sherman in Sydney, Australia. Nemo finds out from the other fish that Dr. Sherman is going to give him as a present to his hyperactive niece, who looks awfully scary with her braces.

Meanwhile, Marlin determines to overcome his fear of the deep and find Nemo. He is helped by a fish with a short term memory loss, named Dory, voiced by comedienne Ellen DeGeneres. Together they outwit sharks, pass through minefields, get caught in the great Australian current, get swallowed by a whale, and finally end up in Sydney – close to Marlin’s beloved Nemo. While Nemo tries valiantly to escape, Marlin tries to rescue him.

Although one can never predict what an audience will do, FINDING NEMO is a great movie and should attract a very broad audience. Pixar has hit one home run after another with TOY STORY 1 and 2, A BUG’S LIFE, and MONSTERS, INC. With FINDING NEMO, they have hit the ball out of the park!

Every second of FINDING NEMO is beautifully animated, spectacularly directed and written with such heart and precision that the script should become required reading for any hopeful scriptwriters. The story and characters are also filled with lots of family-friendly humor.

Best of all, the movie is full of great moral values. It is so pro-father and his children that it could cause the most hard-hearted father to lighten up and cry. There are no references to God, but there are redemptive allegories and a lot of “thank goodnesses.” There is a slight off-color pronunciation of the word “boat” by the little fish, but it is very slight. Also, there is a mild, politically correct reference with the shark saying, ‘Fish are friends, not food” at a “Fish Eaters Anonymous” meeting, but it is such a funny takeoff of Alcoholics Anonymous, that it’s hard to believe it would offend anyone.

FINDING NEMO is the best Pixar movie ever. . . an instant classic. See it on the big screen! It’s that good.