"A Girl and Her Horse" 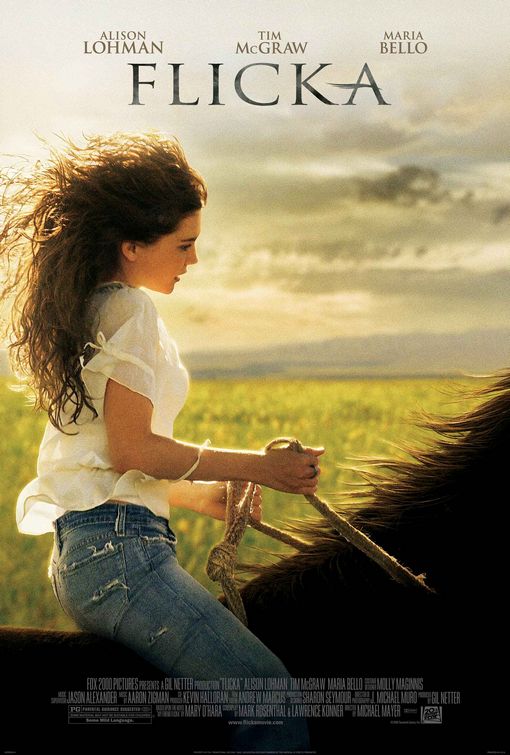 FLICKA is a modernized re-telling of the children's book MY FRIEND FLICKA by Mary O'Hara. The boy in the book has been changed to a girl. Teenager Katie McLothlin comes home to her family's ranch in Wyoming after having an academic problem at school. A wild Mustang horse saves her from a mountain lion, and she brings the horse home and names it Flicka, which means wild girl. Her father is angry about the horse, because Mustangs are known to break up a herd of tame horses. He wants to sell Flicka, but Katie has other ideas.

FLICKA is an entertaining, heartwarming and absorbing family movie. Alison Lohman gives a spirited, versatile performance as Katie. She is ably supported by the rest of the cast. The movie's a little slow in spots, and children may want to see more scenes with Katie training and riding Flicka. The movie celebrates the family bonds that can keep families together, but it seems to go a little too far in making the father the bad guy. Also, the movie has a light Romantic view of the West that favors wild independence above civilization.

(Ro, E, BB, PP, LL, V, N, A, M) Light Romantic worldview with some very light implied environmentalism (but nothing really radical or in-your-face politically correct) that in two or three important places celebrates wild independence above civilization, especially in connecting the movie's modern family story with the Wild West, how the West was won and American pioneers, who are compared to wild Mustang horses and are seen as wild and independent creatures yearning to be free, with some strong moral and pro-American content, including family bonds and love heal a rift between a father and a daughter; about nine mostly light obscenities including one "heck" and three or four apparent "d" words that sound like dang and a few muffled dang words (it's often hard to tell but at least half of the words definitely sound more like dang) and six light exclamatory profanities such as "My God" and one "Dear God" that are said in times of stress; light family movie violence such as horse scares away mountain lion, mountain lion jumps on horse, horse injured, girl thrown from horse a couple times and comes down with strong fever after being in cold wet rain too long, and heroine hears that a wild horse is being mistreated by its new owner; no sex; no nudity; ranch hands may be drinking beer in at least one scene; no smoking; and, teenager avoids telling her parents right away about an academic problem she's had in school, teenager rebels against father's orders, movie seems to go a little too far in casting the father to be the bad guy but his love and concern for his daughter's welfare are shown clearly at times, and someone says, "Animals are a lot like us. . . . You just got to learn to listen to them."

FLICKA is a modernized re-telling of the children’s book MY FRIEND FLICKA by Mary O’Hara. The boy from the book and a previous movie version has been changed to a female.

School’s out for summer in Wyoming. For high-school junior Katie McLoughlin, this means leaving her private school and returning home to her family’s ranch and her beloved horses. The family ranch sits upon a picturesque, yet rugged, mountaintop surrounded by meadows. Katie’s family raises quarter horses, and Katie has come to not only love horses, but to become a seasoned horseback rider and caretaker.

Upon arriving home from school, Katie can’t wait to go for a ride, a ride that becomes a turning point in her life and her family’s life. During this ride, she comes across a wild young mustang, which she later names Flicka. She tries to lasso this wild horse when a mountain lion comes upon the scene. As Katie becomes a target for the mountain lion, Flicka scares off the predator and saves her life. Katie manages to get Flicka back to the ranch and places her in a fenced area to help tame her.

Trouble ensues because Katie’s father is adamant about not having any mustangs on the ranch because this could cause inbreeding with their purebred quarter horses. He calls mustangs bandits on four feet, but Katie has already bonded with the horse. She insists upon keeping the unbridled Flicka, but her father firmly forbids her to tame the horse and strongly warns her to stay away from Flicka. Another problem between them is the fact that Katie didn’t know what to write in response to an important history essay about the American West during a test at school. Leaving the essay blank endangers her graduation to the next grade level, making her father understandably furious. The only possible way for Katie to make amends with her school is by writing a more elaborate essay on the same topic.

Of course, Katie is disobedient regarding her father’s orders regarding Flicka. She tries to train and ride the horse, and Dad responds by getting rid of the horse. Making matters worse is the fact that Katie’s attentions on the horse have taken her away from working on her essay.

Soon it is time for the annual summer rodeo in Wyoming, where Katie’s friend spots Flicka being abused. Katie and her brother, Howard, quickly hatch a scheme to win Flicka back in a rodeo contest and convince their Dad to keep the horse. The plan puts Katie’s life in danger.

Dad, who is considering selling the sprawling family ranch to developers, eventually is inspired by his daughter. Through their conflict, father and daughter come away with a renewed respect and understanding for each other. This paves the way for Howard to make an important decision too. Like Katie and her father, he also does some soul searching.

FLICKA is an entertaining, heartwarming and absorbing family movie that’s ultimately inspiring. Alison Lohman gives a spirited, versatile performance as Katie. She is ably supported by the rest of the cast, which includes country music star Tim McGraw. The movie’s a little slow in spots, however, and some children may want to see more scenes of Katie training and riding Flicka.

FLICKA is a strong family drama with many positive qualities. It celebrates the family bonds and love that can keep families together, even in difficult times. These bonds, and the father’s love for his daughter, help heal the movie’s family conflicts. FLICKA also has a positive view of American history and traditional American values.

The fact remains, however, that there are conflicts between Katie and her father. Even her brother, Howard, has some issues with his father, who wants Howard to take over the farm and Katie to go to college (the movie says that this situation should be reversed). Looked at as a whole, the movie seems to go a little too far, a little too often, in making out the father to be the bad guy. Everyone reconciles at the end, however, in a positive way. There is even a clever solution to the father’s concerns about having a wild Mustang horse on his ranch. Also, the mother has some words of wisdom for the father about Katie’s personality. She reminds him what he may already suspect deep down: that if Katie is too headstrong and too wild, that’s because she takes after her father more than her mother. That’s one reason why I love you both, the mother tells him.

A bigger issue, perhaps, with the movie’s messages from MOVIEGUIDE®’s biblical viewpoint is its light Romantic worldview. For example, the movie overtly says that the American West was won by rebellious pioneers with a wild streak, like the mustangs that Flicka the horse represents. The pioneers were just yearning to be free. This is a Romantic version of How the West Was Won that neglects one of the most important reasons white Europeans and other people settled the land called America. That is, the Christian desire to preach the Gospel of Jesus Christ and establish the dominion over the wilderness that God commands. This Christian view of How the West Was Won is not a popular one any more, but it played a major role in the idea of Manifest Destiny in which most of America’s forefathers and foremothers believed.

Thus, as this FLICKA states, freedom from the more moribund constraints of civilization did indeed play a role in the settling of the West (as in the exploits of some pioneers who wanted to escape civilization to fend their own way in the wilderness). But, the role of God’s command to preach the Gospel and establish the Kingdom of God must also be acknowledged. Parents who teach this historical truth to their children will help protect them from any erroneous conclusions about history and America that FLICKA may possibly generate.