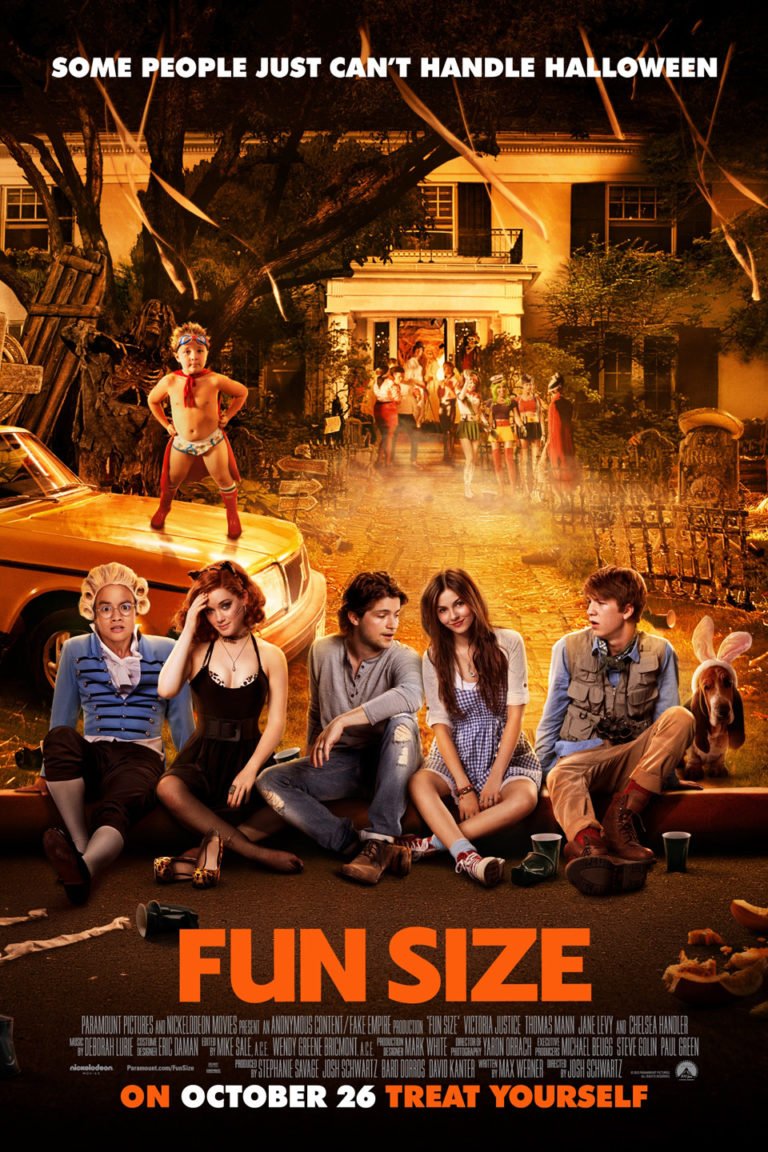 FUN SIZE is Nickelodeon’s latest teenage comedy. In Cleveland, there lives a family trying to adjust to the death of the Dad. Wren is the somewhat awkward teenage girl who’s preparing for college. Her younger, troublemaking brother is a typical highly imaginative boy who stopped talking after their father’s death. It’s Halloween, and Wren has plans to go to a party being held by the high-school heartthrob. Her plans are thwarted when her mother tells her to take her younger brother trick-or-treating instead. While visiting a haunted house place, her brother goes missing. Wren only has a certain amount of time to find him before her mom returns. Wren and her best friend can’t cover enough ground on foot, so they reluctantly ask the school nerds for help.

FUN SIZE is funny and sweet at times. Wren and her family are likable. They have a certain charm to them. FUN SIZE also has some moral elements mixed in with Romantic content. However, where the movie really disappoints is its salacious, lewd content. The crude jokes, provocative clothes, homosexual elements, and foul language make FUN SIZE unacceptable viewing.

(PaPa, BB, RoRo, Ho, LL, V, SS, Ho, N, AA, MM) Strong mixed pagan worldview combining pagan behavior, strong moral themes of being selfless and caring more about others than oneself, plus family truly cares and sticks up for each other, and some Romantic ideas of following one’s heart and personal desires, plus some lesbian homosexual references; 12 profanities, nine obscenities, scatological humor, and talking about anatomy; mostly comic violence includes some wrestling, child punches man’s groin, firecrackers blow up under mans foot as a prank, car crash, and one teen accidentally fires a musket at another teen, but it doesn’t hit anyone; strong sexual content/immorality includes multiple sexual gestures and jokes, implied fornication, one teen introduces friends to his lesbian hippie mother, teenage girl makes a deal with a teenage boy to let him touch her clothed breasts for a period of time in a scene that’s long and drawn out, and passionate kissing among teens; girls dress in provocative costumes at parties, camera ogles teenage girls cleavage, and man runs around naked but nothing explicit is shown; moderate drinking at party; no smoking or drugs; and, vandalism of private property, lying, stealing.

FUN SIZE is Nickelodeon’s latest teenage Halloween comedy. There are some touching, positive moments, but the rest of the movie is an offensive mess.

In Cleveland, there lives a family trying to adjust to the death of the Dad. Wren is the somewhat awkward teenage girl who’s preparing for college. Her younger, troublemaking brother, Albert, is a typical highly imaginative boy who stopped talking after the death of their father. Their mother is struggling being a single mom. In an attempt to cope with her emotional problems, she begins dating a 20-year-old guy.

Wren just wants to leave all the drama behind. With Halloween coming up, what better way to escape than go to Aaron Riley’s party? Aaron is the heartthrob of the high school, and he just happens to have a soft spot for Wren. April, Wren’s best friend, is determined to make this the best Halloween ever, but everything starts falling apart when Wren’s Mother tells her she has to babysit Albert and watch him while he goes trick or treating. Wren tells April, and April hatches a plan to take out Albert and then go Aaron’s party afterwards.

Wren and April take Albert into a haunted house, where Albert goes missing. Wren and April start frantically looking for him, but to no avail. Meanwhile, Albert has wandered over to a convenience store to get a slushy where he befriends the store clerk, a 20-year-old comic book geek.

Wren and April can’t cover enough ground on foot, so they reluctantly ask the school nerds whether they would mind driving them around to help find Albert. The two nerds enthusiastically help the damsels in distress. Will Wren be able to find Albert before their mother gets home?

FUN SIZE has some funny moments to it. The characters are very quirky and have a likable appeal to them. However, the movie has a mixed worldview. There are some strong moral elements of being selfless and kind, but there are also some Romantic elements of following one’s heart rather than doing the right thing. It also has a mixed worldview with some strong moral elements of being selfless and kind. That mixed worldview includes the typical Nickelodeon promotion of youthful rebellion. Worse, the movie has crass humor, lewd jokes, foul language (some spoken by children), provocatively dressed females, and even a lesbian homosexual couple at one point.