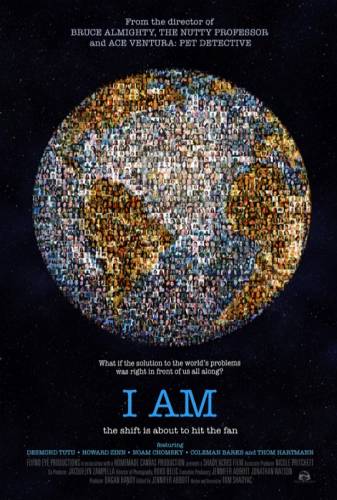 I AM is a personal documentary by successful film director Tom Shadyac, who made BRUCE ALMIGHTY and the ACE VENTURA movies. Tom became a rich, successful director through movies like this. One day, however, he suffered a traumatic bicycle accident that left him with a terrible chronic concussion. So, Tom began examining his life’s purpose on this planet. Then, as the concussion finally started to go away, he began making this movie, which uses some New Age, pagan, scientific, left-wing, but also Christian and biblical, ideas to conclude that we all need to be kinder, gentler, more loving, more compassionate, but also less capitalistic and greedy.

I AM is a well made, engaging and even makes some good points about the need for self-examination, love and compassion. However, the movie’s Christian and even biblical references are overwhelmed by New Age, Buddhist, Hindu, pagan, evolutionary, left-wing, and environmentalist references and comments. This leads to false, revisionist history that’s anti-capitalist to the point of even slandering the American way of life. It results in some irrational conclusions that don’t follow logic. Ultimately, the movie relies on humanity rather than the Gospel of Jesus Christ.

(PaPaPa, RHRHRH, AcapAcapAcap, HH, EvEv, EE, FRFR, CC, BB, L, V, MM) Very strong syncretistic, somewhat mixed pagan worldview with very strong revisionist history that falsely romanticizes American Indian society and alleged religious beliefs, very strong anti-capitalist slant mischaracterizes and slanders the capitalist system, strong emphases on evolutionary biology and Darwinian principles of life but couched within a strong, false New Age, pagan, Eastern, somewhat pantheistic, and environmentalist view of everything being one because everything seems to be connected on the atomic and micro-biological level, but toward the end especially, the movie also promotes Jesus Christ, the Christian monk St. Francis of Assisi and Christian, biblical, moral values such as love, the Golden Rule and Matthew 5:44 (“love your enemies and pray for those who persecute you”) to deliver a strong message about coming together in love and compassion, focusing ultimately on what the individual person can do, so the movie ultimately is trying to make a sincere, albeit misguided, liberal and terribly flawed, attempt to do good and preach love and compassion; one obscenity, one profanity and one obscene gesture; violence includes a bicycle accident seems to be re-created, news footage of riots with punching and kicking, explosions in war, gunfire on the battlefield, and nature footage of animals such as lions and gorillas fighting as well as footage of third world and poor people lying on the street, etc.; no sex; no nudity; no alcohol; no drug use; and, miscellaneous content such as human cruelty toward other humans and the animal kingdom, etc.

I AM is a probing documentary from director Tom Shadyac, best known for comedy movies such as ACE VENTURA: PET DETECTIVE, BRUCE ALMIGHTY and LIAR LIAR. Shadyac journeys around the globe asking leading philosophers and authors two questions: (1) What’s wrong with the world? and (2) What can we do about it? His ultimate conclusion is to promote self-examination, love and compassion, but he gets there using some false left-wing, New Age and “scientific” methods, despite also using some positive references to Jesus Christ, the Bible and Christian moral teachings.

Many people would consider Tom Shadyac to be the model of success. A well-known director who has achieved fame and fortune with blockbuster comedy after blockbuster comedy, Tom seemingly had it all: mansions filled with priceless artwork, a private jet and multiple streams of residual income. Yet, after a life-threatening bicycle accident leaves him with post-concussion syndrome, Tom suffers from deep depression as well as thoughts of suicide – a side effect of the pressure on his brain.

During his darkest hours, Tom found himself questioning many things about his life and the world around him. After months of pain and depression, Tom’s symptoms receded, and his post-concussion syndrome was reversed. Tom immediately pulled together a film crew and set out on a mission to ask the some of the world’s leading left-wing, New Age philosophers, theologians, scientists, activists, and authors two questions: (1) What is wrong with the world? and (2) What can we do about it? This led him to also ask, “What is right with the world?”

The documentary includes interviews from authors, philosophers, activists, and scientists such as Marc Ian Barasch, Coleman Barks, Noam Chomsky, John Francis, Lynne McTaggart, Desmond Tutu, Howard Zinn, David Suzuki, Thom Hartmann, Dean Radin, Dacher Keltner, Daniel Quinn, and many others. Using these interviews, Tom explores the idea that competitive conditioning and current social structure of “dog eat dog” is one of the chief causes of our world’s problems. Along with his interviewees, most of whom are highly biased but a couple of whom are doing interesting research, Shadyac and his crew also explore the idea that humanity is more connected than previously thought. Using quotes from Jesus Christ and the Bible, with references to the Golden Rule, he argues that, perhaps, the way to save the human race is not through competition but cooperation, namely loving one another.

I AM is thought provoking and even challenging. It is a well-made documentary filled with wit and charm, coupled with probing questions that will leave viewers discussing the movie’s arguments long after the credits have finished rolling. However, despite some positive references to Jesus Christ, the Bible, Christian teachings, and St. Francis of Assisi, the famous Christian monk, the movie also uses false and sometimes irrational and slanderous New Age, Buddhist, Hindu, pagan, anti-capitalist, and left-wing statements and “evidence.”

For instance, Shadyac falsely claims that capitalism, including and perhaps especially Wall Street, is a system that focuses almost entirely on competition instead of cooperation. This is not only false; but, it’s also slanderous!

Like a NASCAR race, capitalism (including Wall Street) involves groups of people working (sometimes together) to earn and win some economic benefits for their efforts and their applied talents. Thus, the drivers in a NASCAR race may be competing against other drivers, but they are also cooperating with the other drivers (not to mention their own crews, sponsors, mechanics, and car makers), to produce a fun, profitable event that ultimately not only enriches everyone (including those who watch the race and the racetrack vendors who feed them), but that also rewards the best and the brightest among the competing drivers’ teams. A similar thing happens on Wall Street and in Hollywood, where Tom Shadyac and his filmmaking crew cooperated together with financial backers (including Wall Street investors) to produce entertaining movies that make money for everyone concerned and, hopefully, bring lots of joy to many people.

I AM also takes a false, romanticized view of American Indians, claiming that they all were peaceful, cooperative people who worked together for the common good. This ignores the centuries of warfare, slavery, mistreatment of women, and even cannibalism that occurred among American Indian tribes before the white people from Europe ever even visited North and South America!

Also, although the documentary effectively proves the idea that all human beings are organically connected in various ways to one another, and that we even share some organic, atomic and molecular connections to the life surrounding us on Earth, it jumps to the erroneous conclusion that we then are all “one” in some pantheistic, pagan way. This completely ignores the wonderful, marvelous individuality that God has given us. It also is a logical fallacy known as the categorical fallacy, aka “comparing apples to oranges.” For example, just because sub-atomic quantum physics indicates that the sub-atomic particles in us are connected to all other sub-atomic particles on Earth or in the universe doesn’t mean that our spirits or souls are all one in every other way and that we are one with the Earth in a spiritual way. What Shadyac and his goofy gurus have done is compare the sub-atomic physical level with the spiritual level, like comparing apples with oranges. In other words, they have jumped from one separate category to another separate category. This kind of thinking is not only erroneous, it’s also illogical and, hence, irrational. Regrettably, however, it will suck in many gullible people who tend to think only with their emotions instead of with the “mind of Christ” (1 Corinthians 2:16).

Shadyac almost saves his little movie by focusing on the idea of love, including some references to Jesus Christ, the Bible and the Golden Rule. Thus, at the end of the movie, he does make a very good argument for the need for self-examination, love and compassion. In doing that, he concludes that each one of us is part of the problem but also part of the solution. Thus, Shadyac’s ultimate answer to the questions, What’s wrong with the world and What’s right with the world is “I am.” Hence, the title of his documentary is I AM.

All in all, however, though the conclusions Tom reaches provoke dialogue, his equation is missing one thing: The Gospel of Jesus Christ. His findings do not calculate for sinfulness and the need for a Divine Savior who’s both God and Man. Instead, it relies on humanity alone to save itself from its own selfishness. This is really where the movie fails the most. It surmises that the answer to the world’s problems is love, to love one another, but, sadly, it fails to figure in the greatest part of the equation: “For God so LOVED the world that He gave His one and only begotten Son, that whoever believes in Him shall not perish but have eternal life (John 3:16).”

Editor’s Note: For the real truth about American Indians and their clash with the Europeans, readers should see MYTH CONCEPTIONS by Movieguide® Editor Dr. Tom Snyder from Baker Books. For the ultimate solution to the world’s problems, including the sinfulness of the human race, see THE CULTURE-WISE FAMILY by Movieguide® Founder and Publisher Dr. Ted Baehr and legendary entertainer Pat Boone. Ted and Pat’s insightful, must-read book is available on the Movieguide® website, www.movieguide.org.