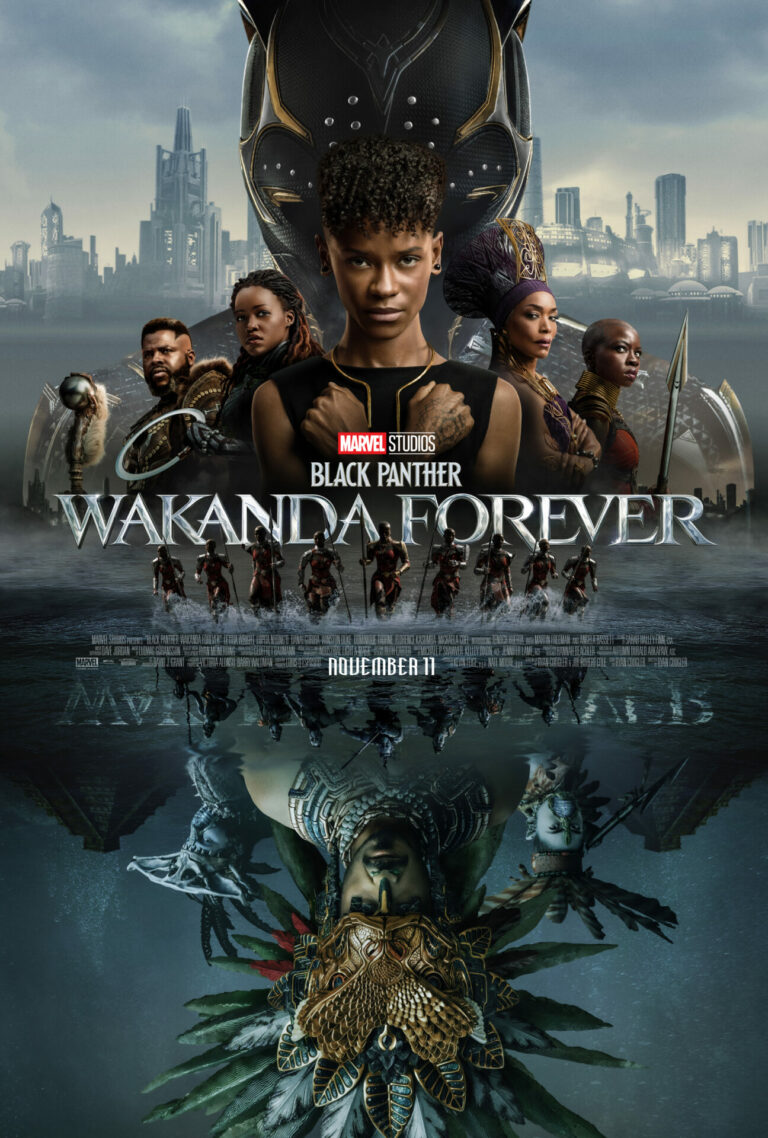 BLACK PANTHER: WAKANDA FOREVER opens with Princess Shuri of Wakanda praying to the Egyptian goddess Bast to help her cure her fatally ill brother, the Black Panther. She fails and loses her way. Shuri’s mother, the Queen, tries to heal Shuri’s grief and renew her faith in their ancestors. The Queen is interrupted when an immortal king with superpowers from an undersea Mayan kingdom appears. He threatens Wakanda with destruction unless it joins him in a war against the world’s leading nations.

BLACK PANTHER: WAKANDA FOREVER is well-produced and eventually promotes mercy and rejects revenge. However, the heroes and villains are not that interesting. Also, the movie has a pagan worldview promoting Non-Christian gods and ancestor worship. It also has an Afro-centric ideology that makes jabs at Christianity. The only way to end slavery, even happening today, is the good news of the Gospel, the paganism and revisionist history in BLACK PANTHER: WAKANDA FOREVER wont accomplish that.

(PaPa, FRFR, PCPC, RHRHRH, APAP, Ab, FeFe, Ho, B, LL, VV, N, M):
Dominant Worldview and Other Worldview Content/Elements:
Strong, slightly mixed, pagan worldview with false religion (the main heroine prays to the Egyptian goddess Bast to help her fatally ill brother but the brother dies, and the heroin loses her faith in her country’s national religion, the heroine’s pagan nation encounters an undersea pagan Mayan nation that also venerates a pagan god, and a Queen has a mystical veneration for her ancestors and their alleged “wisdom”), character visits the ancestral plane after consuming drugs, and with strong politically correct, radical leftist content that contains very strong revisionist history that whitewashes African and Mayan pagan culture and demonizes Western Civilization (including condemnations of the United States, Spain, Portugal, Europe as greedy “colonizers” who take other people’s resources and a scene from the 1600s where the Spanish have turned indigenous natives into slaves), one quick scene makes a Spanish priest seem ignorant and foolish when he calls a Mayan superman with pointy ears and small wings on his feet a demon and satanic, all the main heroes in the movie are empowered females, plus there’s a brief hint of lesbian homosexuality in one brief scene between two women where one woman calls the other woman “my love,” and the other woman kisses the woman’s upper forehead, but the movie’s ending promotes mercy and rejects revenge
Foul Language:
11 obscenities (an equal mixture of "s" and "h" words with one a** word) and four light exclamatory profanities, such as OMG
Violence:
Strong action violence includes a large battle and a medium sized battle with fighting and killing, some explosions, some people seem to drown and one character drowns in one sequence after saving another character from drowning, people pierced by spears, a car chase, people with superpowers fling other people with and without superpowers, a city is deliberately flood, some explosions (including what look like “water bombs”)
Sex:
No sexualization
Nudity:
Some upper male nudity
Alcohol Use:
No alcohol use
Smoking and/or Drug Use and Abuse:
Character consumes a hallucinogenic plant to visit the ancestral plane; and,
Miscellaneous Immorality:
Kidnapping.

BLACK PANTHER: WAKANDA FOREVER continues its Anti-Christian, pagan Afro-centrism with a story wherein the Princess of a fictional, African superpower must find a way to stop the angry, super-powerful king of an ancient undersea Mayan kingdom from fomenting a world war with the superpowers on the surface, including the United States. BLACK PANTHER: WAKANDA FOREVER is well-produced and promotes mercy and rejects revenge at the end, but the heroes and villains are not that interesting, and it has an Afro-centric, that makes jabs at Christianity, and in a few places, and glorifies feminism because all the main heroes are “enlightened” females, and the two male heroes take a back seat.

The movie opens with Princess Shuri of Wakanda in her laboratory trying to find a cure for her dying brother, King T’Challa, aka the Black Panther. Of course, after the first BLACK PANTHER movie, the actor playing the Black Panther, Chad Boseman, suddenly and tragically died of a fatal illness. Before the movie cuts to Shuri working in her large laboratory, viewers can hear her praying to the Egyptian goddess, Bast, to help her save brother. Wrong god, lady!

Wakanda holds a funeral for the King. However, it decides not to create a new Black Panther. In fact, Princess Shuri herself no longer seems to believe in the idea of Wakanda having such a super-powerful pagan protector. She’s lost faith in her country’s god and ancestors and is a thoroughly committed “scientist.”

Meanwhile, somewhere in the Atlantic Ocean, The United States of America has built a large exploration vessel. Using a new machine, it has detected a new source of vibranium, the meteor ore that gives Wakanda its power source and the curative properties of its advanced healthcare system. Apparently, another vibranium meteor struck Earth in the Atlantic. However, under the cover of darkness, an army of blue Mayan soldiers with superpowers, kills all the people on the ship.

Cut to some foreign speaking nationals attacking a Wakandan outreach facility. They’re trying to steal some vibranium tools, but a group of Wakandan female soldiers, led by General Okoye, stops the attack.

Cut again to Geneva, where Ramonda, the Queen of Wakanda and mother to Princess Shuri, appears before an international body of nations. She complains about the United States and other superpowers trying to steal Wakanda’s vibranium resources and its vibranium technology. She threatens to fight any nation or anyone who tries to do this.

Back in Wakanda, Queen Ramonda tries to get Princess Shuri to overcome her mourning for her brother and mystically get in touch with their ancestors. Shuri is reluctant, however. Despite her prayer to the goddess, her scientific mind doesn’t believe her family’s religious, spiritual beliefs and rituals can overcome he grief.

While they’re sitting by a small lake, the leader of the Mayan warriors, King Namor, rises out of the water and seeks to consult with Queen Ramonda. He tells her about the Americans’ use of the detector to find the vibranium deposit under the ocean. Namor tells her the vibranium deposit belongs to his people, who have been made strong and even given superpowers by the vibranium and its effect on ocean plant life. The same thing happens to Wakanda’s choice of a Black Panther protector like Ramonda’s dead son. Namor threatens to attack Wakanda with a vast army if Wakanda doesn’t find the young scientist who invented the vibranium detector and turn him over to the Mayans.

Ramonda asks General Okoye to travel to America, find the scientist and take him to Wakanda. Reluctantly, Ramonda lets her daughter, Shuri, go with Okoye to help her navigate the social and scientific challenges in the mission.

The two women discover that the scientist is Riri Williams, a young black female graduate student at Harvard in Cambridge, Mass. Miss Williams takes them to her warehouse laboratory where she created the detector. She’s also created her own Iron Man suit. She also has a red muscle car that she worked on with her father.

However, the FBI has zeroed in on their location. So, Riri gets into the Iron Man suit while Okoye and Shuri take the red sports car. A big chase ensues that includes some police cars. Then, when the chase ends on a large bridge, King Namor suddenly appears out of the water with some warriors. A fight begins, with Riri coming to the rescue in her Iron Man suit. Namor and his warriors try to kill Riri, but Shuri and Okoye protect her. Foiled by their defense, he decides to kidnap Shuri and Riri.

Namor takes the two women to his underwater kingdom. He tells them that, when the Spanish came to conquer Mexico and Central America, the Mayan’s god told them about a special plant that had been affected by vibranium enriched soil in part of their land. His mother was pregnant at the time with him. She and others ate the plant, turned blue, were blessed with strength, and were able to breathe underwater. So, they fled from the Spaniards and established a home under the sea. Then, when Namor was born, he was blessed by their god and the magical plant with superpowers and immortality. Now, 700 years later, the Mayans have used the vibranium under the ocean to power a magnificent undersea kingdom, Talocan.

However, Namor also tells Shuri that he wants Wakanda to join Talocan and wage war against the “surface nations.” He reasons that none of the other nations on Earth will rest until they’ve stolen all the vibranium from Wakanda and Talocan. If Wakanda refuses, he and Talocan will destroy Wakanda.

A female spy from Queen Ramonda rescues Shuri and the female scientist and brings them to Wakanda. Neither Shuri nor the Queen are interested in waging war on the other superpowers. They also don’t like to be threatened. So, it looks like Wakanda and King Namor’s kingdom are on a collision course headed toward disaster.

BLACK PANTHER: WAKANDA FOREVER has all the production values that Big Hollywood money can buy. It also promotes mercy and rejects revenge at the end. However, except for Queen Ramonda, played by Angela Bassett, the heroes and villains are not that interesting. The movie clearly suffers from the absence of Chadwick Boseman. Also, the script seems a little bit bloated.

Even worse, however, is that the movie has a strong pagan worldview stressing false religion. For example, by opening right away with a prayer to the pagan Egyptian god, Bast, the movie loses sympathy with a good portion of the movie audience in Christian America, not to mention Christian moviegoers in the rest of the world, and millions of Muslims and Jews, the other two monotheistic religions. In addition, the Queen of Wakanda still has a mystical veneration for her royal ancestors, which is another example of false religion in the movie. The only saving grace, perhaps, is that the Egyptian god fails the Princess. This point could have been made stronger if the Princess later on prayed specifically to Jesus or God in general and received a positive answer or found comfort in a biblical verse.

Also, WAKANDA FOREVER has an Afro-centric ideology that whitewashes African and Mayan civilizations and demonizes Christians and Non-African “colonizers,” including the United States. Of course, the sinfulness of human beings is ubiquitous, so it’s a never-ending struggle to promote liberty, justice and prosperity for all. However, paganism offers no solution to this problem, while the Gospel of Jesus Christ does.

WAKANDA FOREVER also has some feminist politics. All the main heroes are females, and the two male heroes take a back seat. The movie also has an overtly Anti-Christian scene that a Spanish priest seems ignorant and foolish when he calls a levitating Mayan superman with pointy ears and small wings on his feet a demon and satanic. There’s also some foul language in the movie.

All in all, therefore, the paganism, identity politics and revisionist history in BLACK PANTHER: WAKANDA FOREVER are abhorrent.