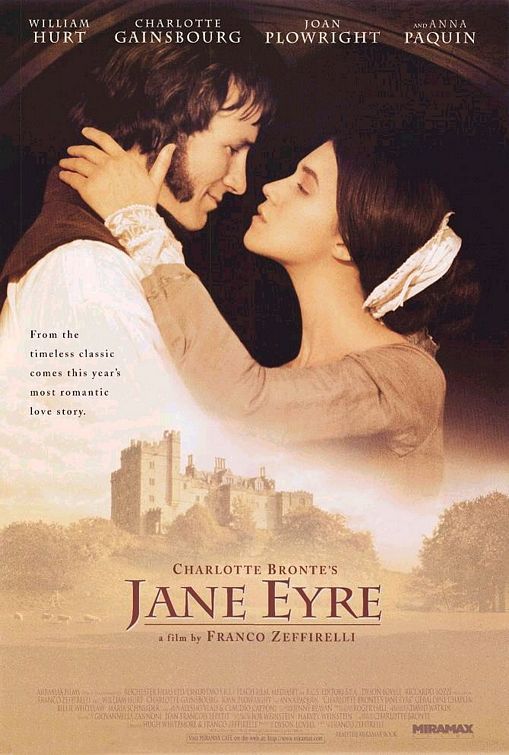 Franco Zeffirelli, who brought us JESUS OF NAZERETH, now brings us Charlotte Bronte's famous romance, JANE EYRE. Though plain by any standard, Jane has an inner dignity, and she ultimately triumphs in love and life. In the tradition of romance novels, the characters seem slightly contrived and the plot tends toward the melodramatic. However, Zeffirelli's superb direction has brought us a splendid, captivating movie.

Franco Zeffirelli, who brought us JESUS OF NAZERETH, now brings us a faithful rendition of Charlotte Bronte’s famous romance novel, JANE EYRE. The film opens with little Jane being mocked by her cousins because Jane’s parents died without leaving her an inheritance. She is then mistreated in a charity school, but she grows into a woman with an inner dignity. She gains employment as the governess of Adele at Thornfield hall. Lord Rochester, the troubled Lord of the Manor, appreciates her forthrightness and intelligence, but he is being courted by many eligible young women. However, under the stars, he confesses that Jane is the one he loves and asks her to marry him. In time, many unexpected, frightening and fortuitous events turn aroud Jane’s life.

The movie portrays some Christians as cruel legalists, although there are positive portraits of other Christians, positive references to God and clear signs of compassion, forgiveness and love, and there is a redemptive element to the story. In the tradition of romance novels, the characters in JANE EYRE seem slightly contrived and the plot tends toward the melodramatic. Even so, Zeffirelli’s superb direction has brought us an splendid, captivating movie.

Writer: Hugh Whitemore & Franco Zeffirelli BASED ON THE NOVEL BY: Charlotte Bronte