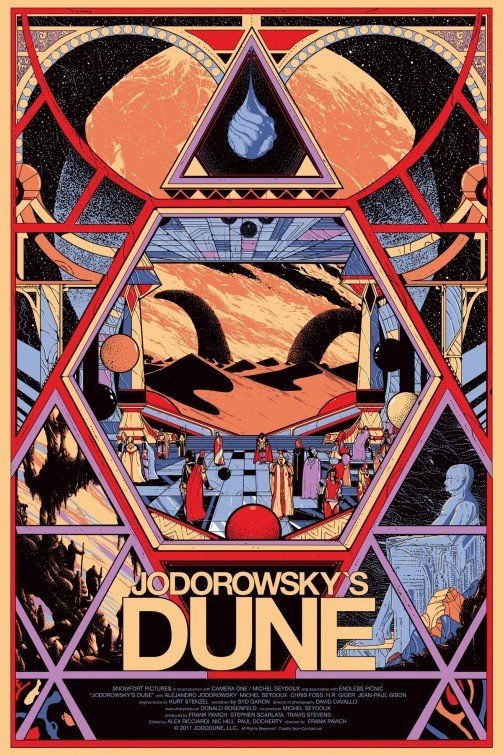 JODOROWSKY’S DUNE is an entertaining documentary (mostly in English) about a very quirky, New Agey, imaginative Chilean film director who tried to get funding for a movie version of the classic science fiction novel DUNE. Published in 1965, the novel is an influential ecology parable that also fit into modern society’s new budding drug culture. Alejandro Jodorowsky is a psychedelic movie director known for making cult midnight movies. When he acquired rights to the novel in 1974, he assembled an impressive group of artists to make a movie version. He created impressive storyboards documenting each scene, but he couldn’t find a movie studio willing to put up the $5 million needed to support a director with limited appeal. The risk wasn’t worth it.

JODOROWSKY’S DUNE gives an absorbing, sometimes humorous, account of Jodorowsky’s personality, his vision for DUNE, and the project’s history. As such, it seems to be accurate, and it matter-of-factly presents Jodorowsky’s New Age, psychedelic, pagan philosophy. It also portrays Jodorowsky’s Non-Christian Romantic view of art and artists. This worldview content, and some adult content, warrants extreme caution for JODOROWSKY’S DUNE.

(PaPaPa, RoRo, FRFR, EE, L, VV, S, NN, A, DDD, M) Very strong, somewhat mixed, pagan worldview with a strong Romantic view of being an artist and false New Age, Buddhist pagan notions and some New Age environmentalism; three obscenities (including one “f” word) and one strong profanity; brief strong violence with some blood of violent death and fighting; some sexual content and references; brief upper female nudity in one scene and brief upper and rear male nudity in a couple scenes; brief alcohol content; documentary subject gives a strong defense of drug use; and, some self-centeredness and rebellion as interview subjects talk about people involved in a movie project that fails to get off the ground.

JODOROWSKY’S DUNE is an entertaining documentary about a very quirky, New Agey, imaginative Chilean film director who tried to get funding for a movie version of the cult science fiction novel DUNE, published in 1965. Like Tolkien’s LORD OF THE RINGS and Robert Heinlein’s STRANGER IN A STRANGE LAND, the novel DUNE (by Frank Herbert) became a cult favorite in the 1960s, because of its engrossing mixture of psychedelic drug themes, complex politics, mysticism, and exciting adventure in its story. Who else but Alejandro Jodorowsky, the director behind EL TOPO, the New Age, trippy “Buddhist spaghetti western” from Italy, could make DUNE take flight?

So, the movie begins by describing how Jodorowsky acquired the rights to film DUNE in 1974. It describes how Jodorowsky started putting together an amazing team to realize his dreams for the movie. Among the people he convinces to help him are future STAR WARS Producer Gary Kurtz, artists like Chris Foss, Dan O’Bannon, and HR Giger (all of whom later went on to work on ALIEN), actor David Carradine, and French illustrator Jean Giraud aka Moebius, whose work influenced such science fiction movies as BLADE RUNNER and THE FIFTH ELEMENT. Using these and other artists, along with his own fertile imagination, Jodorowsky created storyboards of the whole movie he wanted to make, He put the storyboards into an elaborate, carefully bound book of more than 3,000 drawings. All they needed to start filming the project was $5 million more in funding.

So, Jodorowsky sent original color copies of his storyboard book to the major studios in Hollywood. The studios are really interested, but they have no confidence in a cult filmmaker with no real record of success outside of Italy (although his two latest movies had played at midnight and other special screenings around the world).

However, the strangest thing happened after the failed project was turned over to David Lynch (THE ELEPHANT MAN, THE STRAIGHT STORY, and BLUE VELVET). Jodorowsky’s storyboards, full of striking images from artists like HR Giger, Chris Foss, and Moebius seem to have had an influence on future, much more successful Hollywood projects, such as STAR WARS, ALIEN, and THE MATRIX.

JODOROWSKY’S DUNE makes a good case for Jodorowsky’s influence on future science fiction movies, but part of that influence is due to the work of the amazing artists he assembled. During interviews recorded for the documentary, Jodorowsky admits he wanted to make a movie that would simulate an LSD hallucination. The movie doesn’t mention this, but Jodorowsky describes himself as an “atheist mystic” (http://sensesofcinema.com/2007/great-directors/jodorowsky/#b23). He’s not only dabbled in occult practices such as alchemy and Tarot cards but also Zen Buddhism, shamanism, and a New Age form of psychotherapy called “psychomagic.” Politically, his past movies seem to reflect the basic Anti-Christian, Anti-American anti-capitalist, anti-traditional Neo-Marxist politics of the New Left. Thus, he says the western town in his most famous movie, EL TOPO, represents the United States, which he calls a “‘guilty society’” based on “racism, fanatical Christianity, westward colonization, bourgeois social values, and rampant consumerism” (http://sensesofcinema.com/2007/great-directors/jodorowsky/#b23).

JODOROWSKY’S DUNE avoids this political mumbojumbo. However, during the documentary, Jodorowsky often discusses his New Age, Eastern interests in psychedelic drug themes and spiritual concepts like impersonal pantheism. Unlike the book DUNE, in Jodorowsky’s version of the story, the hero’s father has been castrated, and a drop of the father’s blood impregnates the hero’s mother to mystically conceive the hero. Of course, in both the book and Jodorowsky’s version, the mother has been spiritually, psychologically, and even physically transformed by the “spice” of the original novel’s desert planet. This spice not only makes space travel possible; it also expands one’s consciousness in different ways. The galactic empire mining the spice has oppressed the planet and its people, and the hero becomes a sort of political messiah for the planet and its people. Unlike the book, however, the hero dies in Jodorowsky’s script and becomes one with the planet. Now conscious with the hero’s messianic personality, the planet then travels to the rest of the galaxy to free the other planets and peoples oppressed by the evil galactic empire.

Published in 1965, the original novel takes advantage of the social zeitgeist of the times. It capitalizes on the budding environmentalist movement of the 1960s, as well as the drug culture. To its own singular credit, the novel also presciently predicts the Arab-influenced oil crisis of the 1970s and later decades. Jodorowsky’s version takes advantage of the same things, but it predicts the combination of the environmentalist movement with Eastern, New Age pantheism, which sees Earth as the embodiment of a natural, but impersonal, world consciousness, or goddess. Of course, for Jodorowsky and many others, this consciousness is atheistic because it’s impersonal.

Contrary to this pseudo-intellectual foolishness, Christianity teaches that God is separate from His Creation. This Eternal God is also personal. As such, He wants a personal individual relationship with us, through faith and trust in the sacrificial death of Jesus Christ to take away our sin. Through that relationship with God by way of Jesus, we humans also can have fellowship with other Christian human beings and establish a benevolent stewardship over the planet and its animal, mineral, vegetable, reptile, and insect life.

JODOROWSKY’S DUNE gives an absorbing, at times humorous, account of Jodorowsky’s personality, his vision for DUNE, and the history behind his project. In doing all this, it seems fairly accurate. That said, it also matter-of-factly presents Jodorowsky’s New Age, psychedelic pagan philosophy. It also portrays Jodorowsky’s Romantic view of artists as people who give personal expression to their philosophies, regardless of moral, spiritual, or intellectual and rational standards and absolute rules that transcend individual personality, race, sex, ethnicity, nationality, and culture. So, extreme caution is warranted.