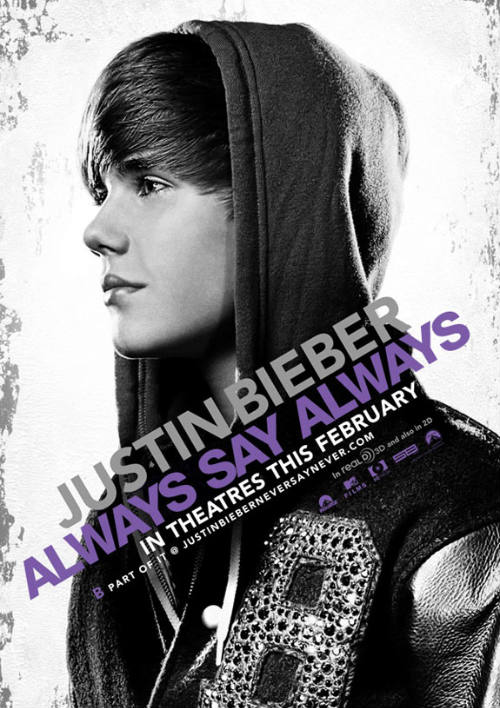 JUSTIN BIEBER: NEVER SAY NEVER is the 16-year-old pop star’s first concert film. It also explores Justin’s personal journey to a sold out concert in Madison Square Garden last year. It details how Justin’s mother started putting up music videos of her talented son singing on YouTube several years ago. The videos attracted some bigwigs in the music industry, and the rest is history. As Justin drives his young female fans gaga, the movie shows Justin, his mother and his team, praying backstage and with his teenage friends.

NEVER SAY NEVER is an entertaining movie that gives viewers an inside peak at the roots of the Justin Bieber phenomenon. The 3D effects are well done. Best yet, the movie is not afraid to show the Christian worldview of Justin, his mother and the team they’ve assembled. Thus, there are several prayers to God, including one “in the name of Jesus.” However, Justin sings only romance songs, and the sight of so many swooning young female fans, including pre-teens, getting so emotional is disturbing. The same thing, of course, happened to Frank Sinatra, Elvis Presley, Michael Jackson, and the Beatles.

(Pa, CC, B, Ro, L, V, N, M) Light mixed worldview with several strong overt references to Christian prayer, including one by Justin Bieber’s mother in the name of Jesus Christ, Justin Bieber leads a prayer over a meal, and old video references to Justin Bieber getting interested in music because of the church musicians with drums and guitars, plus some wholesome moral elements, marred by many Romantic songs about emotional love between couples and screaming female fans, some of whom express a desire to marry Justin Bieber; no obscenities but several light exclamatory profanities using “My God”; some light comic violence includes playful wrestling backstage; no sexual content, many romance songs and screaming girl fans, with a few saying Justin Bieber is “hot” and admiring his hair; shots of Justin Bieber with his shirt off; no alcohol use; no smoking; and, mention is made that Justin’s biological parents separated and divorced when he was very young.

Justin Bieber is a teenage singing sensation of the Digital Age. He began his career about three years ago when his mother started putting up several music videos on YouTube. The videos generated a generous fan base of young girls, and the rest, as they say, is history.

NEVER SAY NEVER is Justin Bieber’s first concert film. Also, it explores Justin’s personal journey to a sold out concert in Madison Square Garden last year, within 18 months of his manager, Scooter Braun signing him up and getting him a record contract with the label of pop star Usher Raymond, another pop star who started his career as a young teenage singing sensation.

The documentary shows Justin becoming fascinated, at the tender age of 3, in the Christian musicians at his single mother’s church in Stratford, Ontario in Canada. His mother, Pattie Malletter, bought him a children’s drum set, then a guitar and keyboard. Blessed with a phenomenal voice, Justin began singing and playing. Then, in 2006, when he was 12, Justin came in second at a local singing competition and began performing on the street outside a local theater. His mother posted on YouTube the video of Justin’s competition performance, as well as other videos of Justin singing. Justin’s popularity on YouTube grew exponentially.

Finally, in 2008, former record executive Scooter Braun of Atlanta caught one of Justin’s 2007 music videos online and became obsessed with signing the young phenom to a record contract. He pursued Justin and His mother, who prayed about Scooter before finally agreeing to letting Justin sing up with Scooter and Usher’s record label.

NEVER SAY NEVER documents this story with cute videos of Justin as a child and Justin as a young teenager singing and playing guitar and drums. Intercut with these videos is backstage footage of Justin and his concert team, including several prayers to the Lord. Also included are interviews with Justin’s emotional young fans and, of course, 3D performance footage from the huge Madison Square Garden concert.

NEVER SAY NEVER is an entertaining concert documentary that gives viewers an inside peak at the rots of the Justin Bieber phenomenon. The 3D effects are well done.

Best yet, the movie is not afraid to show the Christian worldview behind Justin, his mother and the team they’ve assembled. Thus, the movie contains several prayers to God, including one “in the name of Jesus.” Also, Justin’s vocal coach makes a comment about the “responsibility” they have toward Justin and his fans.

However, although Justin has recorded one song titled “Pray,” the songs in the movie consist only of the love songs that drive Justin’s young female fans crazy. As with the early careers of Frank Sinatra, Elvis Presley, the Beatles, Michael Jackson, and other male pop stars, the sight of so many swooning young females, including a few pre-teens, getting so emotional over a celebrity is somewhat disturbing. The movie also has a few light exclamatory profanities and some shots of Justin with his shirt off. MOVIEGUIDE® advises caution, therefore, for older children.