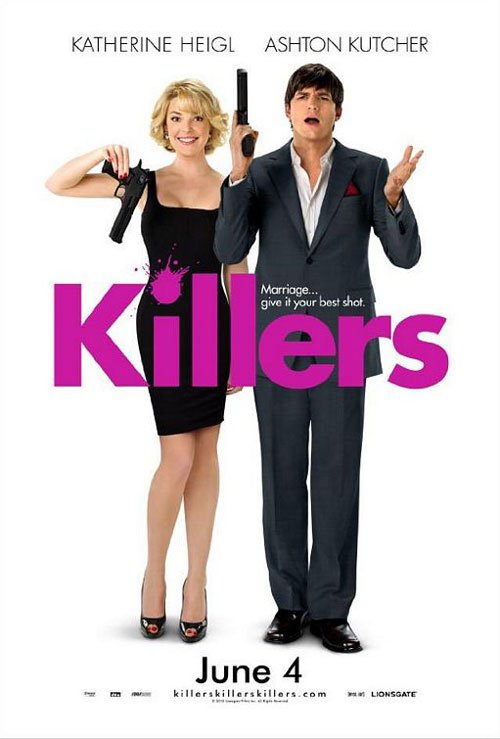 In KILLERS, Jen and Spencer meet, have a whirlwind romance and get married. Spencer doesn’t tell his wife, however, that he used to be an assassin for the CIA. A few years later, Spencer and Jen have a quiet life in the suburbs. Then, Spencer and Jen are suddenly on the run because many of their neighbors are actually “sleeper cell” assassins who have just been “woken up” to assassinate Spencer. Jen finally learns about Spencer’s former life. While dodging bullets, they have to figure out who is out to get them.

KILLERS is a fun, frothy romantic comedy mixed with action. The cast is very charming and funny. There is some brief, yet strong, foul language. Though there are no sex scenes, there is some discussion about sex revolving around the movie’s married couple. The violence varies from hand to hand combat and some on screen shootings, but it’s never very graphic. Spencer is a debonair, playboy type spy who throws it all away in order to be with a “normal” woman and settle down in the suburbs. With caution for children, KILLERS is a fun, entertaining movie.

(BB, PP, Pa, Ro, L, VV, S, N, AA, M) Strong moral worldview with strong positive patriotic content as father tries to protect his daughter and married American couple fights off double agent bad guy along with a playboy spy character choosing to get married and trade in his old life for a normal one, plus some pagan and Romantic elements; two obscenities (including one “f” word) and five profanities; strong action violence, sometimes comical, includes helicopter explodes, much hand to hand fighting and martial arts, much shooting and five people shot on screen; some discussion about sex such as husband called “James Bond” and his wife “Pussy Galore,” the movie’s lead married couple mention how great their sexual relationship is, and kissing between engaged couple; upper male nudity, women in background in bikinis, and woman in underwear; alcohol use, supporting character is alcoholic, and drunkenness at a party; no smoking or drugs; and, lying.

In KILLERS, Jen (played by Katherine Heigl) and Spencer (played by Ashton Kutcher) have a great marriage until hired assassins try to kill them.

Their story begins when Jen goes with her parents on a vacation to Nice, France after breaking up with a long-term boyfriend. In Nice, suave, playboy CIA spy Spencer completes his assassin mission. He meets Jen but doesn’t tell her he’s a spy. After a whirlwind romance, they decide to get married, and Spencer tells his boss he’s out of the assassin business.

A few years later, Spencer and Jen have a nice, quiet life in the suburbs of Atlanta. But then Spencer’s old boss shows up. Suddenly, Spencer and Jen are on the run because many of their neighbors and co-workers are actually “sleeper cell” assassins who have just been “woken up” to assassinate Spencer.

While dodging bullets, Jen learns about Spencer’s former life. They have to survive long enough to figure out who is out to get them.

KILLERS is a fun, frothy romantic comedy mixed with action. It’s a roller coaster ride meant to provide light entertainment. The story takes a number of unexpected twists and the ending is not completely telegraphed, allowing for some fun surprises.

The cast in KILLERS is very charming and funny. Heigl and Kutcher have good chemistry, though neither role is very deep. Tom Selleck and Catherine O’Hara do a great turn as Jen’s parents. Rob Riggle is hilarious as the best friend turned assassin.

KILLERS contains only brief, yet strong, foul language, including one “f” word. Also, though there are no sex scenes, there is some discussion of sex between and about the married couple. For example, friends give the wife advice about not forgetting to shave “down there,” and the couple discusses their sex life as to how great it is. Also, Spencer is literally called James Bond and his wife is called “Pussy Galore,” an homage to the James Bond movie starring Sean Connery and Honor Blackman, GOLDFINGER. The movie’s violence varies from hand to hand combat and people being shot at off screen to on screen shootings, but it’s never very graphic.

KILLERS has many positive qualities. The movie shows Spencer is a debonair playboy “Bond” type spy who throws it all away in order to be with a “normal” woman and settle down in the suburbs. Jen’s father is very protective of her. Some twists at the end show the bad guy to be someone working against the American CIA, but his motives are never revealed, much less discussed. Also, one supporting character is somewhat alcoholic.

With some caution, KILLERS can be a fun, entertaining movie. Please see the CONTENT section above for more details.