"Overcoming the Beast Within" 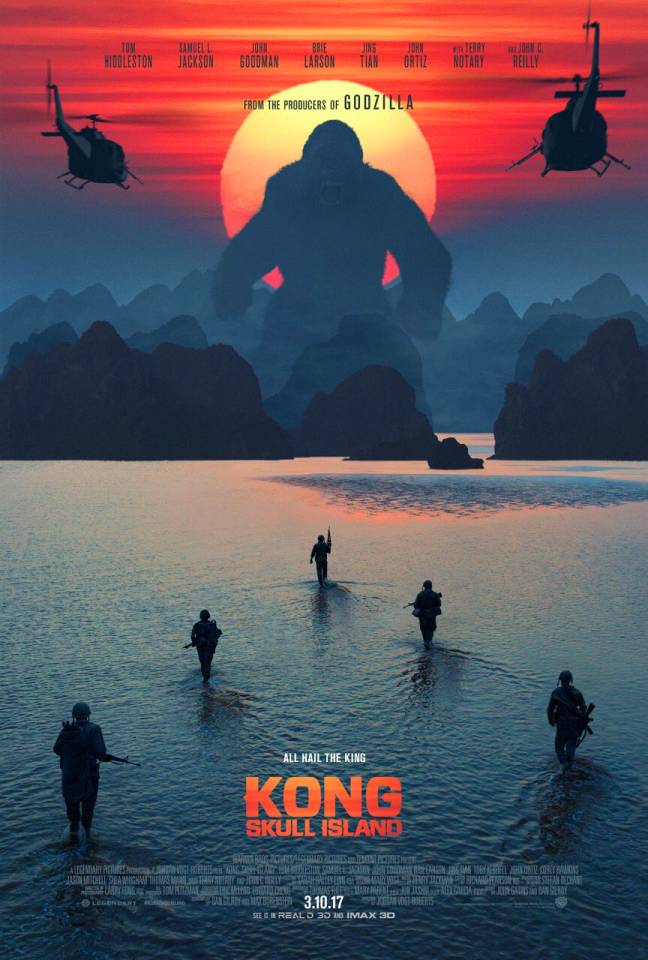 KONG: SKULL ISLAND is a very entertaining monster movie. A large group of scientists and soldiers travel to the giant gorilla, King Kong’s isolated Pacific island in 1973. Along for the ride are a jungle expert and a female war photographer. The team disturbs the big fella and makes him violently angry when they use bombs on his island to test their theory. They try to kill King Kong, so he attacks them, killing most of the soldiers and scientists. The colonel leading the soldiers becomes obsessed with killing Kong, but his obsession endangers everyone’s survival.

Pure entertainment is this movie’s primary intention, and the filmmakers deliver on that promise. The actors also do good jobs, especially John C. Reilly as a World War II pilot trapped on the island for 29 years and Samuel L. Jackson as the obsessed colonel. KONG: SKULL ISLAND has a strong moral worldview celebrating doing the right thing, protecting others, sacrifice, patriotism, family, and fighting evil. However, there are some scary monster battles, obscenities and a reference to pagan worship. MOVIEGUIDE® advises caution for older children.

(BBB, C, PP, Pa, FR, EE, LL, VV, N, A, D, M) Very strong moral worldview overall stresses doing the right thing, helping and protecting others, family, courage, and fighting evil, with light redemptive elements of sacrifice and two or three positive references to God, plus strong patriotic elements where American military and American soldiers are generally honored, even though a military leader becomes too obsessed with malice and revenge, a reference to pagan false religion when an American says some natives worship King Kong as a god, and some strong environmentalist elements but they stop short of being too radical or politically correct; 22 obscenities (including one “f” word and some “s” words combined with a few “h” and “d” words), zero strong profanities, two light exclamatory profanities, plus an MF word is started but left unfinished; strong, intense action violence includes King Kong attacks and grabs and smashes numerous flying helicopters, King Kong flings a giant palm tree and part of a helicopter into a couple helicopters, two helicopters crash into one another and explode, soldiers fire machine guns at King Kong, other explosions, soldiers use napalm fire against King Kong, and he thrashes around, giant lizards with vicious looking teeth attack people and swallow some of them whole, two large prehistoric birds grab a man and take him high into the sky where silhouetted against the sun they tear off one of his arms, giant lizard monsters exploded and shot, two enemy fighter planes crash, but the pilots survive and battle one another until they run into King Kong and the move cuts away, King Kong battles a giant octopus monster and has some tentacles for lunch (sushi!), woman falls into a large river and almost drowns, but King Kong lifts her out of the water while battling a giant lizard monster and saves her, King Kong battles two or three giant lizards, King Kong gets trapped by an anchor chain from a shipwrecked boat and has to free himself to kill a giant lizard attacking him, people battle a giant daddy long legs spider and cut its legs and shoot its body and some spider goo falls onto a soldier still alive lying on the ground, etc.; no real sexual content, but two men visit a man in a bar which appears to be inside a house of prostitution where women in skimpy lingerie are seen with other men but nothing more salacious than that; upper male nudity as soldiers on a mission have their photos taken, plus women in skimpy clothes in one scene but nothing really salacious shown in the theatrical version; alcohol use; brief smoking; and, obsession, malice and revenge but rebuked, and a comment that God appears not to have finished His creation on one isolated island that seems to be a prehistoric throwback.

KONG: SKULL ISLAND is a very entertaining monster movie about a group of scientists and soldiers trying to explore the giant gorilla’s island but who disturb the big fella and make him violently angry when they use some bombs on his island home. KONG: SKULL ISLAND delivers constant fun and excitement, including some delightful humor and strong positive messages celebrating sacrifice, doing the right thing, family, and American servicemen, but there are some scary monster battles, obscenities and a reference to pagan worship.

The movie opens with an American fighter pilot and a Japanese fighter pilot during World War II who parachute onto Skull Island and are soon confronted by the giant gorilla known as King Kong. Cut to 1973. The head of a group called Monarch, Dr. Randa, gets federal funding to explore Skull Island with a group of scientists. They are protected by a platoon of military helicopter pilots led by Lt. Colonel Packard, a no-nonsense officer upset about America abandoning Vietnam to the communists. Along for the ride are a jungle expert named Conrad and a female war photographer, Mason Weaver.

Randa tells the team of explorers and soldiers he doesn’t know what they’ll find on the island, which is protected by a perpetual storm system surrounding it. However, people are suspicious he knows more than he’s telling. Randa and his assistant, Brooks, believe the island is a major portal proving their “hollow earth” theories. So, the first job is for the military helicopters to drop some explosive devices onto the surface, to get some “seismic readings” on what may lie under the island.

The helicopters manage to fly through the dangerous storm system leading to the island, which looks absolutely gorgeous and is surrounded by smaller islands of verdant hills popping up through the ocean. However, when they start dropping their bombs on the island’s surface, an angry King Kong appears and immediately attacks them, destroying most of their helicopters, crashing a few others and killing more than half of Col. Packard’s men.

Stranded on the island’s surface, the survivors have three days to make it to the north end of the island, where and when more military helicopters from their ship are scheduled to pick them up. As they head for that site while exploring the island and trying to survive, they learn the real reason behind King Kong’s ferocious attack. It turns out that Kong is not exactly the vicious beast and villain he first appeared. They also learn that Randa did indeed know more than he told them.

Meanwhile, Col. Packard is so angry about King Kong killing most of his man that he’s now obsessed with killing the giant ape. His obsession puts everyone’s life in absolute peril.

KONG: SKULL ISLAND is clearly a B monster movie, but it’s more entertaining than all the other recent blockbuster monster movies, including the mega global hit from 2015, JURASSIC WORLD. Pure entertainment is its primary intention, and its creators deliver on that promise in spades. The actors also do good jobs, especially John C. Reilly as the jungle-mad but noble World War II pilot 30 years later and Samuel L. Jackson as the obsessed Air Cav colonel. When the colonel has the ultimate showdown with King Kong, Jackson’s eyes practically bleed with anger and hatred. The cinematography and editing in this sequence, as throughout the rest of the movie, are superb.

All this, of course, doesn’t mean that KONG: SKULL ISLAND has no messages in it.

In general, the movie has a strong moral worldview with light redemptive elements. The American soldiers are concerned for their comrades in arms, including Lt. Col. Packard, who’s only obsessed with killing King Kong because Kong killed his men. Of course, when they first encountered Kong, they started shooting at him. Also, by dropping bombs on the island, they not only were dropping bombs on Kong’s home, [SPOILERS FOLLOW] they were also dropping bombs on the home of a tribe of natives whom Kong had pledged to protect (from what is the movie’s major secret). The loyalty between the soldiers is also depicted by acts of sacrifice among them.

The noblest of the soldiers, however, is John C. Reilly’s World War II fighter pilot, Hank Marlow. He’s been stuck on the island for 29 years, but has befriended the island’s mysterious but friendly tribe of natives who don’t say much. Marlow had a wife back in the states, and the day his plane crashed on the island, he had received a letter from his wife telling him she’s just given birth to their son. Reilly is given a lot of humor and emotion to use with this character, and he does a bang-up job.

Beyond that, KONG: SKULL ISLAND promotes doing the right thing, helping and protecting others, sacrifice, patriotism, family, courage, and fighting evil. In dong all that, the movie eschews malice, revenge and destruction for the sake of destruction. In addition, the movie contains a few positive references to God.

As such, the movie borrows the binary theme of the original 1933 classic movie, KING KONG, Civilization vs. The Jungle. In this KONG movie, although the giant ape does indeed live in a jungle that can be vicious, he’s also not without civilizing tendencies. Thus, he protects the human natives and, eventually, the intruding humans. Also, the movie also reveals that Kong himself once had a family and that his family suffered a tragic death that Kong could not prevent. Like the original KING KONG, this makes the giant ape a tragic, noble figure, not just a vicious unthinking beast. Also, King Kong’s dual nature as a civilized beast echoes the dual nature of man as created in God’s image but fallen into sin. Kong also is the colonel’s doppleganger or shadow, representing the Beast that lurks inside us all. Of course, Genesis 2:21-24 in the Bible shows, besides faith in God, Family is the foundation of all Civilization, so all the movie’s allusions to Family become a major moral, redemptive subplot and theme.

At one point, however, Capt. Marlow says he believes the natives on Skull Island worship King Kong as a god. The movie also has an environmentalist subtext where Randa and his assistant contend that Earth doesn’t belong to man but belongs to creatures like King Kong. These environmentalist elements stop short of being too radical or politically correct, however.