LAST OF THE DOGMEN 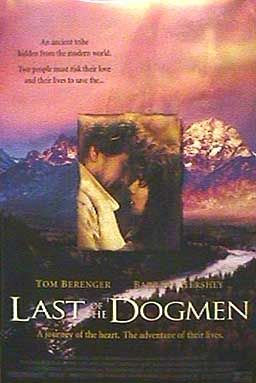 When a group of convicts escapes into the deep woods of the American Northwest, they are killed by THE LAST OF THE DOGMEN. This picture examines the ludicrous possibility that some of America is still uncharted, and that a Cheyenne Indian tribe is living on it as they have always done for hundreds of years. Tom Berenger and Barbara Hershey become friends to the Indians in this lackluster picture containing some violence and extensive foul language.

In LAST OF THE DOGMEN, Tom Berenger plays Lewis, a reluctant, hard-hearted tracker, hired by his father-in-law, Sheriff Deegan to go after criminals on the lam. Lewis comes upon the prisoners, but before he can round them up, he finds a bloody mess and a broken Cheyenne arrow. Lewis comes back to town and finds Dr. L.D. Sloane, an anthropologist who knows the Cheyenne culture. Together, they go back into the forest and meet a lost Cheyenne Indian tribe. As they learn to love the tribe, they vow to never reveal these people to any modern American. The remainder of the film involves the duo devising ways to hide the tribe from Sheriff Deegan and the rest of America.

This film is hard to accept. The premise of the picture is more fantastic than a science fiction film. If America can send a man to the moon, they can chart every square inch of Montana. The film doesn’t depict nor endorse Indian religion, but the underlying message is that American culture, particularly its legal system, is inferior and more brutal than that of these primitive people. Not only does this film have some brief moments of bloody violence, but it contains a great deal of profanity and obscenities and should not be rated PG.