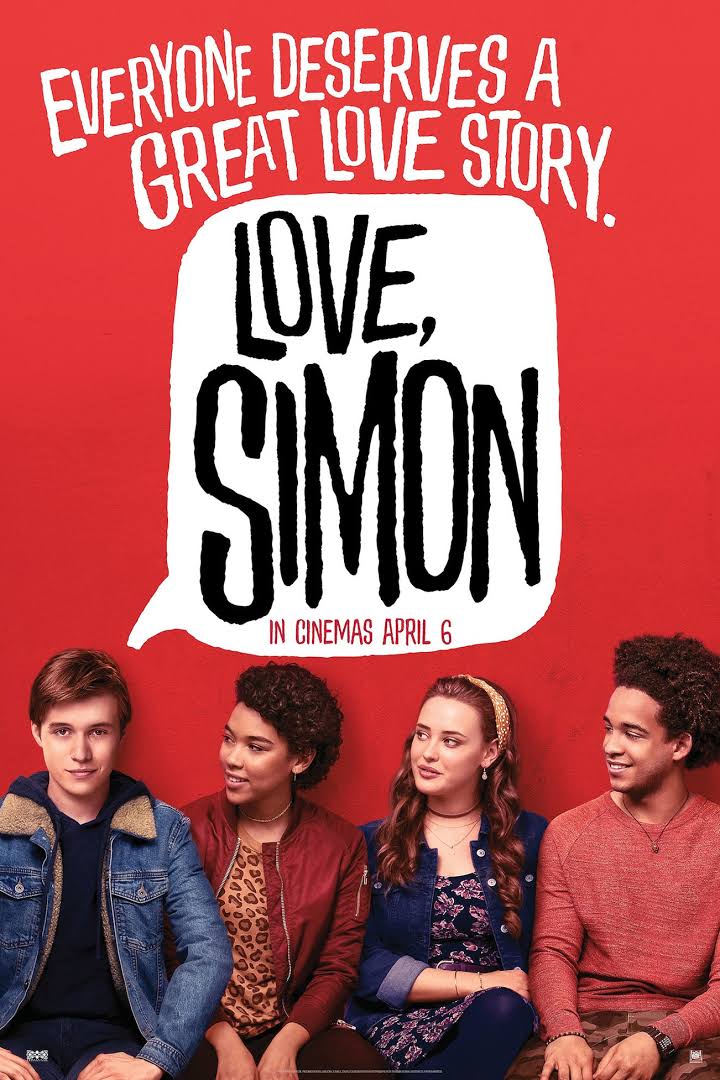 LOVE, SIMON is a homosexual teenage romance about a high school student struggling to come out of the closet to his friends and family. Simon has a nice life. His parents are cool, he has a younger sister he likes, and he hangs out with his best friends all the time. The only thing is that no one knows about his homosexual feelings. When a fellow schoolmate posts an anonymous message on the school’s online forum confessing his own homosexual feelings, Simon begins emailing the classmate, and they begin a friendship.

Everything about LOVE, SIMON feels like the sappy coming of age romance moviegoers have seen a hundred times. The difference is its homosexual protagonist. Strip that aspect away, and the movie’s plot points don’t really offer anything new to the genre. Sadly, the movie addresses the topic of homosexuality from a secular perspective and subversively redefines what love and its purpose is. In addition to this anti-biblical message, LOVE, SIMON has lots of foul language, underage drinking and endorses sex before marriage. So, media-wise viewers will want to avoid LOVE, SIMON.

(RoRoRo, HoHoHo, B, C, LLL, SS, N, AA, DD, M):
Dominant Worldview and Other Worldview Content/Elements:
Very strong Romantic, pro-homosexual worldview contending people should be who they personally want to be (with no moral or biblical constraints and apart from God), that sexual attraction and lust should dictate who we love, and that tolerance is a transcendent attribute we should apply to ourselves and to others, with light moral, redemptive elements of forgiveness and empathy for others and a few references to Jesus, but not in a strong or particularly overt positive or negative way;
Foul Language:
16 obscenities (including one “f” word), 20 profanities (including several GDs and one JC) and teenager vomits;
Violence:
No violence;
Sex:
Strong sexual immorality includes homosexual behavior and overtly promotes homosexual behavior and sex before marriage but no explicit sex scenes, discussion of teenage sex, a reference to masturbation, the entire plot revolves around homosexuality, teenage boys kiss four times, and a reference to male genitalia;
Nudity:
Upper male nudity and teenage girls wear skimpy outfits;
Alcohol Use:
Moderate drinking by teenagers with drunkenness;
Smoking and/or Drug Use and Abuse:
No smoking but a reference to huffing paint, which can cause brain damage, other physical impairments and even death; and,
Miscellaneous Immorality:
Lying and bullying, but rebuked.

LOVE, SIMON is a homosexual teenage romance movie about a high school student struggling to come out of the closet to his friends and family.

Simon Spier describes himself as a normal teenager in suburban Atlanta. He has really cool parents, he has a younger sister who he likes, and he has his best friends, Leah, Alexandra and Nick. The only thing that Simon is hiding is the fact that he has homosexual feelings. He admits that he doesn’t know why he doesn’t reveal his feelings. He knows his parents and his friends will be fine with it, though they might be surprised. Simon just really likes his life, and he doesn’t want it to change.

One day a student at Simon’s school posts a message on the school’s online forum anonymously stating under the pseudonym “Blue” that he’s homosexual. Simon is excited that there’s another boy like him at the school, so he creates a fake email address so he can tell Blue that he’s just like him and that he’s unsure how or when to reveal his true feelings.

Simon and Blue email back and forth and develop a friendship, all the while Simon tries to figure out who Blue might be at his school. Meanwhile, one of Simon’s obnoxious schoolmates, Martin, finds out about Simons secrets, and blackmails Simon so that he’ll set Martin up with Simon’s pretty best friend, Alexandra. Simon isn’t ready to publicly proclaim his homosexual feelings, however. So, against his better judgment, he starts manipulating Alexandra’s love life so he can keep his secret.

Simon begins to fall in love with Blue, and the two inspire each other to start revealing themselves to certain friends and family, but Simon’s secret is exposed to the school before he’s ready. This makes everything awkward, and his friends discover he had manipulated them.

Will Simon find out who Blue is?

Everything about LOVE, SIMON feels like the sappy coming of age romance story moviegoers have seen a hundred times. The only difference is its protagonist’s homosexual feelings. Strip that aspect away, and the movie’s plot points don’t really offer anything new to the genre. That said, the movie is actually very well cast, particularly Nick Robinson, who’s a terrific and empathetic Simon.

The filmmakers try really hard to be inoffensive in LOVE, SIMON since so many LGBTQ movies are edgy R-rated dramas. There’s no mean-old Christian, and other than a few school bullies who are quickly rebuked, everyone is quite accepting in the movie. There’s even a joke with a day-dreamed dance sequence with brightly dressed dancers that results in Nick shaking his head and saying he doesn’t want to be “THAT gay.”

All in all, LOVE, SIMON tries to be as harmless as possible. It doesn’t make an argument for the LGBTQ cause, it simply assumes the audience is already affirming of that lifestyle. It’s subversive filmmaking at its finest, which is troubling for Christians with a biblical conviction on homosexual sin.

In the movie, Simon’s parents are actually perfect representations of America’s progressive culture today. Jennifer Garner and Josh Duhamel play the modern, tolerant parents who let it slide that their teenager comes home drunk one night, but they pat themselves on the back as good parents because at least Simon came home before curfew. They aren’t there to correct, and they certainly aren’t there to judge. Their only role is to “love,” whatever that means. When Simon reveals his homosexual feelings to his family, there’s a scene where his mother tells him she just wants Simon to be the most “you” that he can be.

In reality, this type of tolerance does not work in parenting, nor does it work in culture. If correction is replaced with acceptance, all that results is morally ambiguous individuals, which in turn results in all sorts of moral decay. That doesn’t mean there isn’t grace and love in both parenting and culture. There definitely is, but it’s guided by moral principles found in The Bible.

American culture has strayed so far from the Bible that sin is no longer considered sin unless it hurts someone else. The sexual revolution in the 1960s really spread this moral hijacking of sexual expression and freedom by essentially arguing that “what’s done with my body is my business.” The media has promoted this mindset in music, TV, magazines, and movies for decades, and the natural progression would only lead to an acceptance of homosexual lifestyles as we’ve seen in other cultures. For Christians that hold to a traditional biblical worldview, this issue is fairly clear cut. Sex was created for covenantal marriage between a man and women. For those that would consider themselves Christians, but do have a hard time accepting everything the Bible says about sexuality, one has to re-examine what sin actually is. While sin is often described as an offense against a fellow human (murder, theft, etc.), it first and foremost is an offense against God and His protective law. LOVE, SIMON subtly preaches this mindset not so much in words, but in action by proclaiming it as the most loving worldview, which of course it is not because anything that celebrates sin, any sin, prevents people from being in a personal relationship with God through Jesus Christ or seriously damages that personal relationship.

LOVE, SIMON is destructive because it attempts to redefine what love is, just as our culture has for many years. While holding to the truth of Scripture, our job as Christians is to combat this cultural lie surrounding sexuality and love, not with anger, but with real love as exemplified by Jesus Christ. According to 1 Corinthians 13:4-8, “Love is patient, love is kind. It does not envy, it does not boast, it is not proud. It does not dishonor others, it is not self-seeking, it is not easily angered, it keeps no record of wrongs. Love does not delight in evil but rejoices with the truth. It always protects, always trusts, always hopes, always perseveres. Love never fails. But where there are prophecies, they will cease; where there are tongues, they will be stilled; where there is knowledge, it will pass away.”

In addition to its anti-biblical message, LOVE, SIMON also has a fair amount of foul language, underage drinking and even endorses sex before marriage. This content gives media-wise moviegoers even more reason to skip LOVE, SIMON.