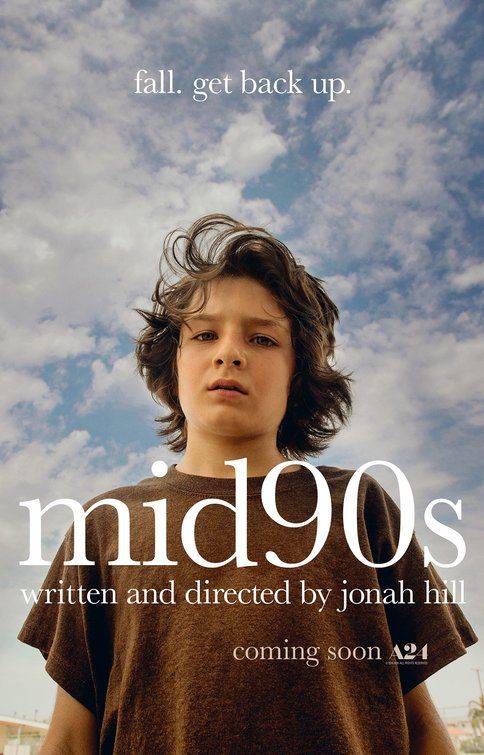 MID90s takes place 20 years ago, in a pre-millennium Los Angeles. Stevie is 13-years-old and wants to start skateboarding. He trades some of his favorite video games for his older brother’s old skateboard and starts hanging out with other teenage skaters. He looks up to the older teenagers, who’ve been skating for a while, and wants to be as “cool” as they are. However, being “cool” comes with a price that Stevie has to learn the hard way.

MID90s is an endearing, somewhat perceptive snapshot into the lives of teenagers in the 1990s whose lives revolve around their skateboarding. It shows the struggles of teenagers who grow up in less-than-ideal situations, and the differences between them. A few have bigger dreams and use their hatred of the neighborhood to fuel their fire, while others resort to substance abuse to numb their pain. The movie has heart, but it also has a high degree of objectionable content. Thus, MID90s has a strong Romantic worldview with abundant foul language, some politically correct conclusions about homosexuality, crude teenage sexuality and lots of teenage substance abuse.

(RoRoRo, HoHo, PCPC, B, C, LLL, VV, SS, N, AAA, DDD, MM):
Dominant Worldview and Other Worldview Content/Elements:
Very strong Romantic worldview, with some overt homosexual references to make Romantic, politically correct points about the subject, where all the characters follow their own dreams and desires above all else, teenagers are very rebellious and blatantly disrespectful to their mothers, disobeying in order to do what they want to do, but there are some light moral, redemptive elements where one character who leads by example by not partaking in the others’ alcohol and drug use because he wants something more than that;
Foul Language:
More than 230 obscenities (including at least 160 “f” words), at least 10 profanities, the “n” word is used more than 30 times as well as multiple examples of words like “retarded,” “faggot” and derogatory terms for human genitalia, and two instances of young boys urinating publicly;
Violence:
Multiple fistfights between young boys or teenagers, mild blood and bruises, one serious car crash scene with a mild amount of blood, a violent fall off a roof, brother repeatedly bullies and beats up his younger brother, one scene where a young boy tries a skateboard trick and busts his head with a moderate amount of blood shown;
Sex:
Strong sexual content (most of it is implied or spoken and not shown), teenagers have very perverted conversation about whether they would rather perform oral sex on their mom or their dad, other talks about oral sex and other sexual behavior, main character has a sexual encounter with teenage girl and talks about what he did in very blatant terms, mother is unmarried and fornicates at random, implied fornication when a strange man emerges half-dressed from the bedroom of the main character’s mother;
Nudity:
Multiple examples of upper male nudity in non-sexual way, one scene where a teenage girl takes her clothes off down to her underwear, a few examples of a teenage boy in his boxers, and teenage boy has sexy poster of a girl in his room, but her body parts are covered;
Alcohol Use:
High level of alcohol use, there is a house party scene where there is a lot of underage drinking, the teenagers often have beers or other alcohol, and a few examples of drunkenness, including drunk driving;
Smoking and/or Drug Use and Abuse:
Multiple examples of smoking cigarettes with younger teenagers throughout the movie, a few examples of marijuana use, one scene where a teenager passes out from medication he got from his psychiatrist for being ADHD, presumably Adderall;
Miscellaneous Immorality:
Strong miscellaneous immorality includes multiple examples of dysfunctional family, older brother is constantly beating on his younger brother, strong level of disrespect to the mother, young teenager screams violently at his mother for embarrassing him in front of his friends, examples of bad role models, teenagers steal money from their mothers’ dressers and then lie about it, teenager gives away a skateboard at the skate shop he works at without permission of his superiors, and examples of moral relativism.

MID90s follows the youthful adventures of Stevie, a young teenager who begins to hang out with the skateboarders in his neighborhood. When he trades some of his favorite video games for his older brother’s skateboard, he practices using a skateboard by trial and error. Stevie befriends another young teenager named Ruben, who tells him the ins and outs of the crew. There are some older teenagers who are more experienced skateboarders, whom Stevie and Ruben admire and even idolize. For these guys, skateboarding is their life and working toward making a living of it is what they’re all about.

Stevie is the more innocent member in the group, shy and nervous, afraid to say the wrong thing. Ruben falsely informs him that if he says, “Thank you,” people will think he’s homosexual. However, with one swift comment, Stevie quickly becomes a core member of the group, and Ruben is subtly pushed to the side. Stevie becomes closer and closer to the older teenagers. With that, his maturity increases rapidly because of the experiences he’s having a bit prematurely.

One of the older teenagers, Ray, really plans on making a living with skating. He plans on working hard in order to get out of the neighborhood. He and his best friend always talked about what they were going to do with their skating, but his friend has taken a downward turn. All his friend seems to care about is how he can become inebriated and doesn’t care anymore about exerting any effort. It’s an obvious cover up for something deeper, but Ray doesn’t let other people’s negativity affect him or his dreams.

One night, Stevie comes home very late at night clearly drunk and his older brother finds him. His brother tells him he’s messing up and then tells his mother the next day. Furious, Stevie’s mom finds all his friends and chews them out about giving her son alcohol. Embarrassed, Stevie screams at his mother and resorts to rage and self-harm.

Ray tells Stevie about the problems of some of the other teenagers and his own problem’s after losing his little brother. Ray encourages Stevie by explaining that things could be worse.

One day while skating, some of the older teenagers are heavily drinking and smoking. Stevie is also making a solo attempt at a 40 oz beer, until Ray cuts him off. Later, one of the teenagers who’s obviously inebriated takes the wheel of a car.

MID90s is an endearing, somewhat perceptive snapshot of unexpected friendship in an unexpected place. While some of the teenagers try to act like trying hard isn’t very cool, Ray shows them all what perseverance and hard work looks like, being a good influence on young Stevie. The movie is relatable on many different levels and with many different types of audience. MID90s is written and directed by Jonah Hill, whose style and sense of humor bleed through the movie. Also, the dialogue is so natural, so viewers might think none of it was “written” at all.

However, MID90s has an extremely high amount of questionable content. With more than 160 “f” bombs, almost every other word in MID90s is dripping with vulgarity. Besides this, the movie contains strong violence, crude sexual content and teenage substance abuse. There are some moral, redemptive elements coming from one character, who doesn’t abuse alcohol or drugs, but the movie in general has a very strong Romantic worldview where all the characters follow their own dreams and desires above everything else. The negative elements involve teenagers. So, MID90s is totally unacceptable material for media-wise moviegoers. The movie is expected to get a wide release in November.