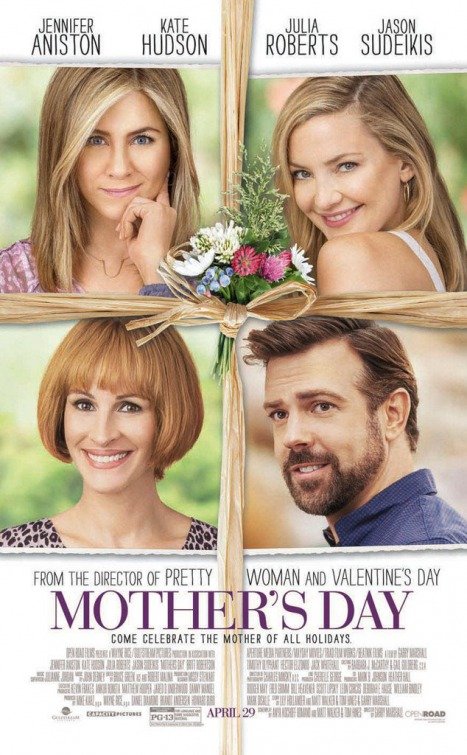 MOTHER’S DAY is a comedy drama about three different families dealing with issues surrounding Mother’s Day. Sandy is a divorced mother of two, when her ex-husband surprises her with his new, younger wife. Meanwhile, two women, Jesse and her lesbian sister Gabi, have to make up with their mother, who has a problem with each of their chosen partners. Finally, Kristen has a child with her boyfriend and must decide whether to marry him while dealing with her feelings of being abandoned by her own biological mother. All these, and more stories of motherhood, come to a climax.

MOTHER’S DAY is poorly written, but does have some moral, redemptive messages about the importance of motherhood. The dialogue is sometimes static, and the storylines are a bit clichéd. In addition, the movie has a Romantic worldview promoting a philosophy of do your own thing and follow your heart rather than a message of do the right thing. It has a politically correct attitude promoting homosexuality. Finally, MOTHERS DAY has some strong foul language. Therefore, extreme caution is advised for this new holiday movie.

(RoRo, B, C, Pa, FR, PCPC, HoHo, LL, V, S, A, MM) Strong Romantic worldview, with dysfunctional families and the main theme is follow your heart, with some moral, redemptive elements of mothers sacrificing for their children, plus a Buddhist icon is shown and some overt pro-homosexual behavior and references; nine obscenities and 10 profanities (including two strong profanities profaning Jesus in the credits, nine obscenities, plus some crude gestures; man falls off house and breaks his leg; depicted sexual immorality as a homosexual couple is shown cuddling, plus a man hits on another man; no nudity but women sometimes in some skimpy outfits; light drinking; no smoking nor drug use; and, stealing and lying but rebuked.

A group of mothers meet and come together for MOTHER’S DAY. MOTHER’S DAY is a poorly written movie, but does have some nice sentimental messages of the importance of Motherhood.

Sandy is a proud but divorced mother to two boys, Mikey and Peter. When her ex-husband comes to her and tells her he’s eloped and remarried a much younger woman, named Tina, Sandy becomes distraught. She must come to terms with the fact that her ex-husband surprised her with this news, and how her two boys will react.

When Sandy is at the supermarket, she meets Bradley in the checkout line. Sandy laughs while Bradley awkwardly tries to play mother and buy some things for his teenage daughter. Though Sandy doesn’t know, Bradley is a widow who’s having a tough time moving forward after the loss of his beloved wife.

Meanwhile, Mother’s Day is coming up, and two sisters, Jesse and Gabi, are thinking about their mother. They haven’t been on the best terms with their mother, after their mother disapproved of Jesse’s relationship with an Indian man. Gabi is also hiding the fact she’s a lesbian, has a partner and has adopted a child. When the two decide to reconnect with their mother, they continue to lie to her about their lives, but only a couple days later, their mother surprises them at their front door. No longer can they hide from her, so they must all come together in spite of their differences.

Jesse takes her little boy to the playground, where she connects with another mother named Kristin. Kristin has a child with her boyfriend, who’s been asking her to marry him. She’s finally realized, however, that she has a fear of commitment because she has abandonment issues since she was given up for adoption. Jesse suggests to Kristin that she finds her mother and goes to meet her. So, Kristin decides to meet her, knowing that now her mother is a famous television marketer.

When Mother’s Day finally comes around, all these people and their personal issues come to a climax.

MOTHER’S DAY has too many storylines and characters. The dialogue is very poorly written, static, and on the nose. For example, almost every character pointedly notes their relationship to other characters, saying such things as “I’m your sister,” “I’m your boyfriend,” etc. In fact, the characters are practically explaining their emotions instead of showing them, as when Kristen explicitly says, “I have a fear of abandonment and therefore cannot commit to marriage.” Also, many of the storylines that do occur are very pedestrian and clichéd. Of course, better writing and direction can make a familiar plot much better.

MOTHER’S DAY has a Romantic worldview promoting a philosophy of do your own thing and follow your heart, with little or no moral center. The movie also promotes a Romantic, Non-Christian, politically correct attitude toward Gabi’s homosexual relationship. It also contains some strong foul language. That said, there are a few moral and redemptive messages about motherhood and the sacrifices mothers make for their children. In addition, one heterosexual couple does decide to get married, which is a nice, uplifting element.

Overall, however, MOVIEGUIDE® advises extreme caution for this MOTHER’S DAY.

Surprisingly, Garry Marshall, the movie’s very successful director, didn’t do such a good job on this no-brainer. A movie about Mother’s Day should be better than this movie is. In fact, all of his recent movies about holidays, including VALENTINE’S DAY and NEW YEARS EVE, have been unsatisfying. MOVIEGUIDE® suggests viewers re-visit a his other, more successful and more uplifting works, RUNAWAY BRIDE, RAISING HELEN and THE PRINCESS DIARIES, instead of MOTHER’S DAY. Hollywood has been trying to capitalize on Marshall’s earlier success, but it’s not working.