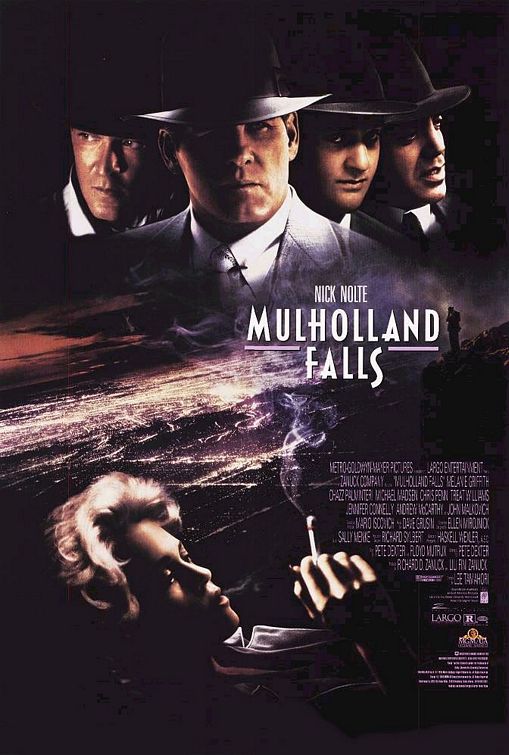 MULHOLLAND FALLS depicts a 1950's LAPD police team who pursue their own form of justice. Investigating the murder of a call girl, Nick Nolte plays police Chief Max Hoover who inflicts pain on anyone who stands in his way, including prime suspect General Timms. Violent, gritty and including graphic sex. It is a foul simplification of the film noire genre.

In the tradition of gritty film noire about cops and crime, MULHOLLAND FALLS depicts a 1950’s LAPD police team that roughs up criminals while executing their own justice. Nick Nolte plays Chief Max Hoover, a hard-boiled detective who goes soft when he discovers a call girl broken in a million pieces. The girl is his mistress, Katherine Collidge. Hoover meets her homosexual friend Jimmy Fields, who gives Hoover a film of Collidge having sex with Gen. Timms. When Fields is gunned down, Hoover probes into Timms and his activities. Mrs. Hoover, one day, gets a film showing her husband in a compromising position with Collidge. Enraged, Chief Hoover beats up Timms’s thugs and demands to know the full story. Eventually, this whodunit is solved through casualties including shoot outs and fatal free falls from an airplane.

Down to the cars, guns, shadows, and tough guys, this movie is a modern copy of the film noires that preceded the Golden Age of Hollywood. The only difference is that it is has color, graphic sex, obscenities and profanity. Every character is unsavory, and there are no redemptive moments at all. Everyone loses something whether it be their lives or reputations. If anything, this movie is a testament to the futility of sin, but that issue has been examined with far better stories with far better actors.