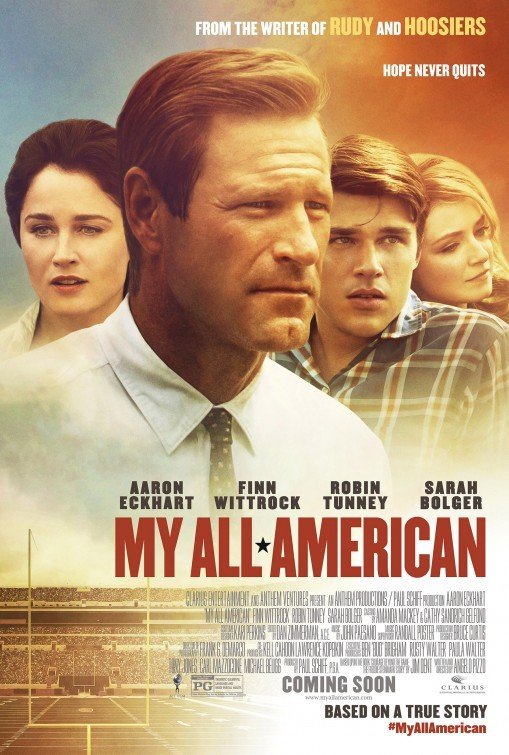 In MY ALL AMERICAN, legendary football coach Darrell Royal of the University of Texas, tells the story of his best player, Freddie Steinmark. Freddie comes from a hard working, lower class family. In order to get a college football scholarship, Freddie and his dad train every day. When a new girl comes to town, Linda, Freddie and Linda start a relationship. Senior year comes and Freddie hasn’t heard anything from colleges. Finally, Freddie gets an offer from Coach Royal. Freddie accepts, but he’s the smallest one on the team, so he must prove his ability.

MY ALL AMERICAN has a strong Christian, moral worldview and is entertaining, but the plotline needs refining. The main character is a strong Catholic. He goes to church, takes communion and prays for others. The acting is well done but the storyline isn’t clear, because the characters aren’t working toward a specific game or championship. The football scenes drag and could have been reduced. Overall, however, MY ALL AMERICAN is entertaining and has a positive Christian message, but there’s some foul language. So, caution is advised.

(CC,BB, LL, V, N, A) Strong Christian, moral worldview, character goes to church, takes communion, prays, and makes the sign of the cross, images of crosses, and some Mary icons; 17 obscenities and one GD profanity; violence only in football games; no sexual immorality, just a kiss; male rear nudity; no alcohol use but mentions of it; no smoking nor drug use; and, nothing else objectionable.

Legendary Coach Darrell Royal of the University of Texas tells the story of his best player, Freddie Steinmark, in MY ALL AMERICAN. MY ALL AMERICAN has a strong Christian, moral worldview and is entertaining, but the plotline could have been refined and there is some foul language.

When asked by a journalist who is his favorite player, Coach Royal tells the story of Freddie Steinmark. Freddie came from a family were both parents worked and hard work was emphasized. Every day Freddie would train hard to be the best at football he could. Linda, a pretty girl, comes to school, and Freddie takes interest. Even though Linda has no knowledge about football, the two connect and start dating in the 11th grade. Linda’s sweet and supportive, while Freddie’s passionate about football and making his goals come true.

One thing everyone knows about Freddie is that he’s always positive. He goes to mass every morning, prays and supports his teammates. In his senior year, Freddie hasn’t gotten any offers for football scholarships from colleges, even though he’s a great player. Being on the shorter side and his weight being low, the colleges are nervous to take him, but one Couch, known for taking risks, Coach Darrell Royal from University of Texas at Austin, offers Freddie a position on the team.

Will Freddie be able to make it in such a rigorous, top football team?

MY ALL AMERICAN has a strong Christian, moral worldview. The main character is a strong Catholic. He regularly goes to church, takes communion and prays for others. In one touching scene, he prays for his friend, and his friend also prays, though he had never prayed before that. Freddie’s positive character has a very positive effect on his teammates and his legendary couch.

MY ALL AMERICAN is an entertaining movie. The acting and costumes are well done. In much of the movie, however, there’s not a lot of conflict, until three fourths into the story, when there’s a very surprising turn that really did not need to be in the movie. The plotline also isn’t clear, because the characters aren’t working toward a specific game or championship. The football scenes drag and could have been reduced. Overall, however, MY ALL AMERICAN is entertaining, with a positive Christian message, but there is some foul language. So, caution is advised.

Rent or Buy MY ALL AMERICAN: