"From Pups to Men" 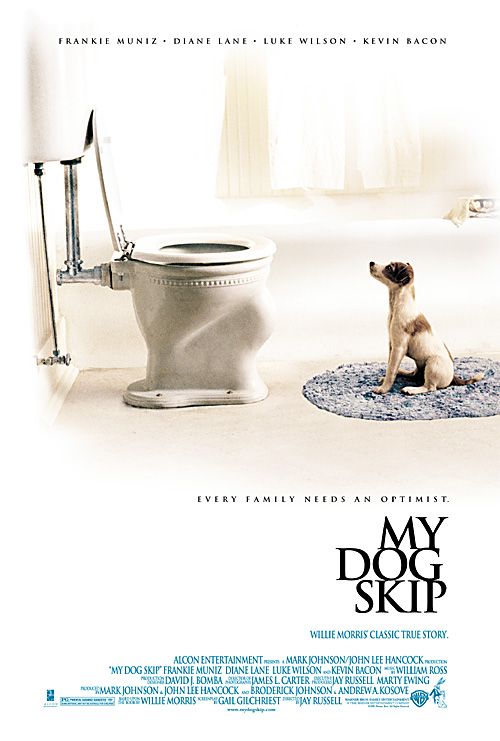 In the family movie MY DOG SKIP, 8-year-old Willie Morris lives in Yazoo, Mississippi in 1942. Willie is an only child, the son of an overly protective father. Willie’s great hero is Dink Jenkens, the star athlete who lives next door. On his birthday, Willie’s mother gives Willie a dog, against her husband’s advice. Willie and Skip become inseparable. Willie discovers moonshiners using an old grave to hide their alcohol. One day, when Willie takes out his frustration on Skip, Skip runs away, getting locked in the moonshiners’ tomb. This crisis helps Willie become a man, who eventually grows up to be a magazine editor.

MY DOG SKIP is an elegant tale, with great character studies. It also has positive references to faith and every day concerns. Everyone involved should be commended because it is one of the best-constructed family movies, hampered only by some lightweight vulgarities. Probably the only missing ingredient is a sense of simple fun for younger children which would make it more accessible to Willie’s 8-year-old contemporaries in the audience. Even so, MY DOG SKIP is a faithful, hopeful, uplifting coming-of-age movie that children and adults will love

(BB, C, H, LL, V, A, D, M) Moral worldview with a positive reference to God, a picture of the sacred heart of Jesus, as well as some minor humanist elements; 11 obscenities, a reference to fear causing someone to relieve themselves in their clothes & implicitly rebuked minor references to sissy & anti-black statements; minor violence such as dog gets slapped, boy gets pushed around by bullies, bullies gang up on boy, bootleggers threaten boy, bootleggers hit dog with shovel off-screen, deer shot, & dog attacks Adolph Hitler dummy in crotch area; no sex but incipient romance of two children; no nudity; alcohol use; smoking; and, references to witch in graveyard to scare young boy.

1942 in Yazoo, Mississippi is the year that a little dog named Skip helped 8-year-old Willie Morris grow up in the movie MY DOG SKIP. Yazoo, Mississippi is a quiet town where everyone seems to try to get along. Willie is an only child. His father lost his leg in the Spanish Civil war and is overly protective of his son. Willie’s great hero is Dink Jenkens, the star athlete who lives next door.

Willie is so alienated from his classmates that he can’t think of any friends to invite to his birthday party so the party consists only of his parents and his aging grandparents. At the end of the party, his loving mother gives Willie a little dog against the wishes of her husband. Willie’s father is afraid that the dog will break Willie’s heart, but even so he relents and allows Willie to keep Skip.

They become inseparable. Skip introduces Willie to the prettiest girl in town as well as to other friends. Dink goes off to war, and, from overseas, sends Willie a German helmet and gun belt which arouses the envy of the bullies down the street.

Hoping to win the Nazi memorabilia, the bullies haze Willie, but eventually adopt him into their gang, after he courageously spends the night in a cemetery on their dare. In the cemetery, however, Willie and Skip discover that some moonshiners are using an old tomb to hide their illegal alcohol.

Meanwhile, Dink Jenkens comes back from the war a little too early, and soon it is revealed that he went AWOL.

One day, during a baseball game, Willie takes out his frustration and slaps Skip. Skip runs away and gets locked into the moonshiners’ tomb. Eventually, Willie and Dink find the moonshiners just as one of them hits the little dog with a shovel. This crisis helps Willie become a man, who eventually grows up to be editor of HARPER’S magazine.

MY DOG SKIP is an elegant literary tale. It has great character studies. It is very well crafted. It has positive references to faith, and everyday concerns.

Everyone involved should be commended because it is one of the better-constructed family movies, hampered only by some lightweight vulgarities and obscenities. Probably the only missing ingredient in this movie is a sense of simple fun for younger children. This would make it more accessible to Willie’s 8-year-old contemporaries in the audience, those children with the most to learn from seeing this movie. Even so, MY DOG SKIP is a faithful, hopeful, uplifting coming-of-age movie that children and adults will love.

Rent or Buy MY DOG SKIP: