"Pagan Worldviews Made Easy For Children" 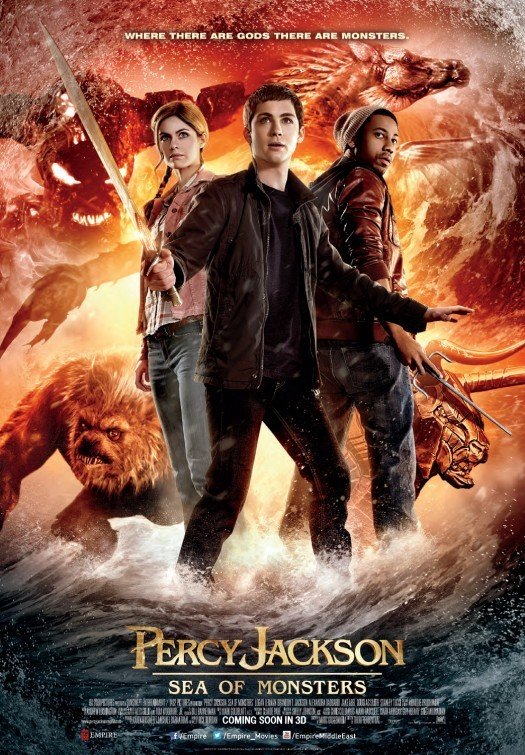 PERCY JACKSON: SEA OF MONSTERS is the sequel to the fantasy franchise about Percy, the half-human son of the Greek god, Poseidon. Percy’s nemesis, Luke, threatens the special camp for demi-gods. Percy, his friends and his half-brother, Tyson, a Cyclops, go on a dangerous mission to retrieve the Golden Fleece. The fleece has healing power to restore the camp’s safety, but Percy’s nemesis Luke plans to use the cloak to take control of the world. Also, the fleece is guarded by a giant Cyclops in the Sea of Monsters, also known as the Bermuda Triangle.

PERCY JACKSON: SEA OF MONSTERS doesn’t progress the story or the characters that much and is full of plot holes. There’s also a major problem revolving around the world being set in a polytheistic universe with many gods and demi-gods. This element is confusing for young children. That said, there are many biblical virtues portrayed in SEA OF MONSTERS, including teamwork, self-sacrifice, faith, and even a nod to Jesus, but the pagan worldview overshadows many of those virtues, so Movieguide® advises strong or extreme caution for media-wise viewers.

(PaPaPa, OO, FRFR, C, B, L, VV, A, M) Very strong pagan, polytheistic worldview in a world with many gods and demi-gods (half-human and half-god), an occult dead witch prophesies, with some Christian, biblical values such as self-sacrifice, teamwork, loyalty, and faith, and a positive Christian reference when someone states that Christians have “a guy” who can turn water into wine, stating, “now that’s a God!”; three obscenities and two light profanities; some action violence that includes young children getting attacked by giant one eyed monsters, a giant mechanical bull attacks a camp and destroys buildings, three eyeless monsters, a giant monster in the sea swallows the main characters up and other monsters including zombies, cyclopses and other mythical beasts, someone is shot by an arrow and a giant satanic looking “god” is unleashed and must be fought by the heroes, and hero gets bruised and bloodied; no sexual content, but one male character dresses up like a chambermaid to avoid getting eaten by a monster; no nudity; no alcohol use, but a reference to changing water into wine and some sort of strong nectar is drunk; no smoking; and, a camp leader steals an idea from the kids and acts in a selfish way.

PERCY JACKSON: SEA OF MONSTERS is the new installment of the PERCY JACKSON franchise based on the children’s novels by the same name. This pagan fantasy adventure that has many draws to children is far from family friendly.

SEA OF MONSTERS takes place right after its predecessor PERCY JACKSON AND THE OLYMPIANS. Even though he saved the world from the destruction of the gods, Percy, half-human son of the Greek god, Poseidon, doesn’t feel very heroic. At Camp Half-Blood (a special training camp for demi-gods), Percy wonders if he has any greatness in him. Percy also learns he has a half-brother, Tyson, who’s not even human, but instead half-cyclops.

Unlike Percy, Tyson is overjoyed with the thought of having a new brother. Percy’s demi-god nemesis, Luke, threatens the safety of the camp by destroying its magical borders. In order to save the camp, Percy, Tyson and his friends, Grover (a satyr) and Annabeth, go on a quest to retrieve the magical Golden Fleece. Only the fleece has the healing powers to fix the camp’s borders.

To retrieve the Golden Fleece, these four teenagers must go through the Sea of Monsters, or, as the humans call it, the Bermuda Triangle. They also must face the giant cyclops who holds on to the fleece. Meanwhile, Luke and other demi-gods bent on destruction are also after the Golden Fleece so they can use it to overthrow the rule of the gods.

PERCY JACKSON: SEA OF MONSTERS doesn’t progress the story or the characters that much and is full of plot holes. Many plot elements happen with little to no explanation, and the CGI isn’t good enough to hold the audience’s interest. Percy does begin to learn that his destiny is full of greatness, and his bond with his friends is strengthened through the adventure. There are also some genuinely funny moments, especially revolving around Luke’s father Hermes, played by Nathan Fillion.

The problem with this movie revolves around the pagan and polytheistic worldview. The entire concept of the story borrows from pagan mythology and is set in a world where there is not one God, but many gods. This is the direct opposite from what Scripture tells us and could potentially be very confusing and even damaging to young children seeking to understand the truth.

That said, SEA OF MONSTERS does borrow some Biblical and even Christian virtues. Percy is more concerned with the safety of others, even during trivial competitions with his camp rivals. Percy’s brother Tyson also teaches him to “have faith,” and Tyson seems to exhibit this childlike trust in his father Poseidon. In the end, rivals learn to be friends, friends learn teamwork, and self-sacrifice for the sake of others is exemplified. There’s even a Christian reference when one of the camp leaders says that the Christians have “a guy” who can turn water into wine. “Now, that’s a God!” he exclaims.

Overall, the positive attributes of PERCY JACKSON: SEA OF MONSTERS are overshadowed by pagan worldviews and action violence that warrants a strong or extreme caution for media-wise viewers.