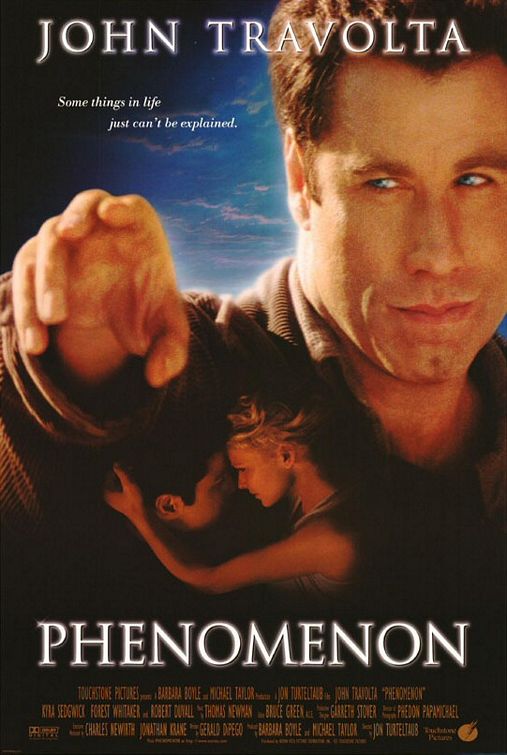 PHENOMENON is a simple story of a man played by John Travolta who begins to have extraordinary intelligence and abilities. As his intelligence grows, he becomes an outcast in his own town. He is a man looking for love and acceptance. With a Scientology worldview, it does have some depiction of telekinesis. A slight but warm tale, PHENOMENON also includes some foul language

From the director of WHILE YOU WERE SLEEPING, comes PHENOMENON a warm movie starring John Travolta. Travolta plays George Malley, a simple man living in a small town. On his 37th birthday, he sees a bright light in the sky that knocks him down. He recovers quickly, but soon finds that he is able to read and learn much more quickly. He becomes very intelligent at an incredible rate. George decides the only way he can manage his knowledge is to share it with others, for the betterment of humanity. Yet, as he does teach others, he finds he is alienating himself even more. Eventually, he sees another light in the sky causing him to blackout. He is put into the hospital and finds out the source is not aliens from space, but something a lot more natural yet equally frightening.

PHENOMENON deals with paranormal abilities, but it has a very natural, albeit unrealistic, explanation for George’s telekinetic powers and sensory perceptions. PHENOMENON contains some of the best depiction of human emotion this year. While stating that humans need love and acceptance, it champions the enlightened being, a superhuman without recognition of it as a gift from God. PHENOMENON is rated PG and doesn’t have violence or depicted sex, but it isn’t geared at all for children. Having some foul language and brief rear nudity, it is a simple tale with a Scientology worldview.