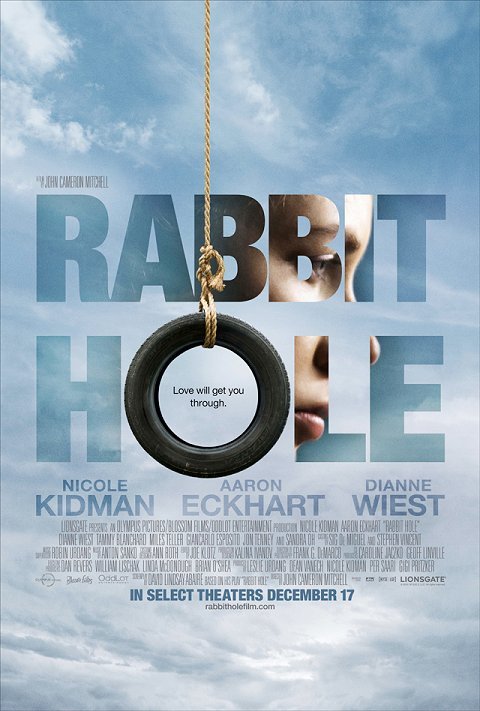 RABBIT HOLE opens eight months after Becca and Howie Corbett’s 4-year-old son, Danny, was killed when he raced out into the street chasing the family’s hyper dog. Howie finds solace in his memories of Danny, while Becca is in denial. In fact, she lashes out at almost everyone, especially people who superficially talk about God, like her mother. Then, Becca secretly establishes a mentoring friendship with the teenage boy who drove the car that killed Danny. When Becca quits their support group, Howie reaches out to a woman whose husband also quit. Can anything prevent Becca and Howie from getting a divorce?

The acting and visual composition in RABBIT HOLE are very good. Nicole Kidman does a fine job as Becca, though she’s sometimes annoying. This undermines the jeopardy of her losing her marriage. Regrettably, the movie has a very strong humanist worldview. This includes, among other things, a shallow portrayal of people who believe in God or turn to Him, and Becca’s attacks on them, including her mother. The movie also has some positive moral, redemptive elements focusing on forgiveness and love. So, RABBIT HOLE is not a total waste.

(HHH, AbAb, B, C, LL, V, S, A, DD, MM) Very strong humanist worldview with strong comments by female protagonist against belief in God and against using that belief to help people through the grief process in two or three scenes, which also gives a superficial portrayal of those who belief in God, but female protagonist also is angry with how her husband seems to be dealing with his grief in his non-religious way and there are some light moral, redemptive elements generating sympathy for the lead married couple who have lost their 4-year-old son to a traffic accident and including some positive content supporting commitment, forgiveness and love, plus female protagonist eventually reconciles with her religious mother but not because she’s finally become religious; four obscenities (including one “f” word), five strong profanities and nine light profanities; implied death in a traffic accident and some angry arguments; no sex scenes but grief-stricken married man almost gets together with grief-stricken woman whose husband left her and female protagonist’s sister is pregnant out of wedlock with her boyfriend/fiancé; no nudity; alcohol use; smoking and marijuana use, plus mention that mother’s oldest child overdosed on heroin; and, denial of grief, jealousy, side character reveals to married man that her own husband has left her but he decides against an affair, anger toward God, and grief-stricken woman becomes interested in teenage boy’s comic book about multiple universes and she says something like, “So, somewhere I’m happy.”

RABBIT HOLE is a moving drama about dealing with grief over the death of a child. Nicole Kidman’s performance as the mother is earning some Oscar buzz, but, regrettably, the movie has a very strong humanist worldview, with some anti-religious dialogue, though it does contain a few positive aspects.

The story opens eight months after Becca and Howie Corbett’s 4-year-old son, Danny, was killed when he raced out into the street chasing the family’s hyper runaway dog. Howie finds solace in his memories of his beloved son, while Becca is in denial. In fact, she lashes out at almost everyone, especially people who superficially talk about God, like her mother — and, especially if people in her group mention that the tragic death of a child is somehow part of God’s plan. Thus, when one grief-stricken man in her support group says, “God needed another angel,” she gets really angry.

Becca quits the support group after attacking its very existence. Becca’s action encourages the husband of another couple to quit. In the wake of this event, Howie establishes a friendship with the wife, starting with a little pot smoking party outside the therapy building. Meanwhile, instead of the support group, Becca secretly establishes a friendship with the teenage boy driving the car that killed Danny.

In effect, therefore, Becca and Howie are finding solace in everything but each other. Forget about God: He doesn’t even enter into this equation.

Eventually, Howie finds out about Becca’s private talks with the teenage boy. Becca begins to reconcile with her religious mother, but not because Becca’s turned religious. Also, Howie decides that he shouldn’t follow through on any attraction he feels toward the other woman.

The question remains, what can bring Howie and Becca back together emotionally?

The acting and visual composition in RABBIT HOLE are very good. Nicole Kidman does indeed do a fine job as Becca, though her grief denial’s too irritating and a bit too pat. Because her character’s somewhat annoying, this undercuts the story’s jeopardy, which is the possibility that Danny’s death will break apart Becca and Howie’s marriage.

Regrettably, RABBIT HOLE has a very strong humanist worldview. The worldview includes comments against belief in God by Becca and a shallow portrayal of the religion of Becca’s antagonists who do believe in God, including her mother. Also, the teenage driver, whose father has died, shows Becca a comic book he’s made where he imagines multiple universes, some where his family is intact and some where other members of his family are missing. This humanist device [SPOILER ALERT] finally seems to give Becca some solace, ultimately encouraging her to reconcile with her mother and then her husband.

Despite its humanist themes, RABBIT HOLE contains some moral, redemptive elements, especially in second half and the third act (which is interesting given the movie’s rejection of faith and values elsewhere). Thus, parts of the movie, especially the third act, contain expressions of commitment, forgiveness and especially love, which is the thing that finally brings Howie and Becca together. Consequently, RABBIT HOLE is not a total loss.

Of course, contrary to the movie, there are several good answers to the kind of gratuitous tragedy that strikes the couple in this movie. And, just saying that it’s all part of God’s mysterious plan is not one of them.

Of all the answers, one of the best may be that, whenever tragedy strikes us, especially tragedy that seems really gratuitous and/or meaningless, we need to remember that Jesus Christ is right there beside us, willing to take all of our cares and burdens and ready to give us the power and love that can carry us through the day. Or, as the former Marine tells the little boy in the recent television movie A WALK IN MY SHOES when the boy asks where God was when his father died in Iraq, he says, “Right beside him.” Naturally, this may not completely or immediately wash away the grief, but it’s a good answer to the problem of natural evil, especially natural evil that seems gratuitous or unnecessary. And, it puts the focus back on Jesus.

RABBIT HOLE also contains some strong foul language, but there are no sex scenes or explicit nudity.