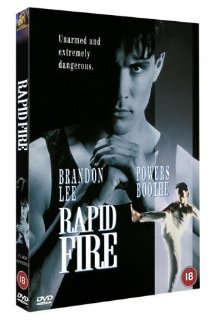 RAPID FIRE stars Brandon Lee, son of the legendary Bruce Lee, as a pacifist college student who becomes embroiled in an effort to catch a notorious heroin pusher. RAPID FIRE has a preposterous plot, some wretched acting, perverse sex, and derives its action solely from gratuitous bloody violence and destruction.

RAPID FIRE stars Brandon Lee, son of the legendary Bruce Lee, as Jake Lo, a pacifist college student who is plunged into one man’s effort to catch a notorious heroin pusher. Jake becomes embroiled in this situation after inadvertently witnessing the murder of a drug dealer. Jake’s predicament becomes known to Mace Ryan, a maverick Chicago cop who gets his leads through illegal wiretapping. Together with Ryan’s female partner Karla Withers, Jake and Ryan blaze a trail through over an hour of bloody violence and torrential profanity leading to Tau.

RAPID FIRE is full of the brutal martial arts and machine-gun violence. One message is that the ability to kill with hands and feet, takes the moral high ground over the use of weapons. More disturbingly, sex scenes are interspersed with scenes of a drug pusher being murdered in prison, thus providing a perverse joining of sex and violence in the viewer’s mind. Furthermore, most of the FBI men are corrupt, and the only policemen who can be trusted are maverick cops. RAPID FIRE has a preposterous plot, some wretched acting, perverse sex, and derives its action solely from gratuitous bloody violence and destruction.

Producer: Alan McElroy BASED ON THE STORY BY: Cindy Cirile