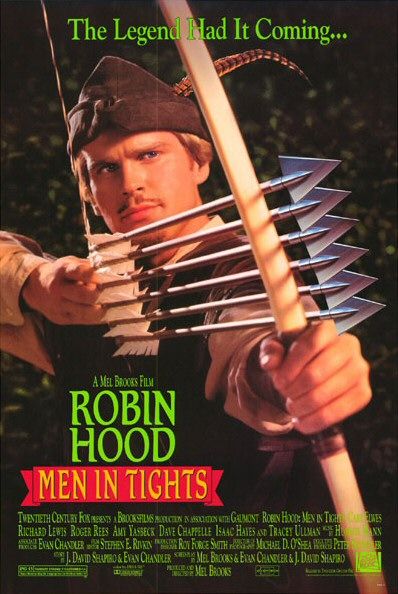 Mel Brooks' ROBIN HOOD: MEN IN TIGHTS is a satiric rendering of Kevin Costner's classic film ROBIN HOOD; as such, the film pokes gentle fun of the classic film. The film, for the most part, is done in good taste and provides an evening of humor for teenagers and adults.

(H, L, M, N, O, V) Humanism; less than half a dozen obscenities & two mild profanities; thieving from the rich is an integral part of the Robin Hood story but treated very minimally here; Maid Marion shown exiting a bath--nothing is shown but it still was a long lascivious look at her dripping wet in her chastity belt; a blind man fondles a statue of Venus de Milo; a sorceress helps the sheriff plot Robin Hood's fall; and, violence of the general sword-wielding kind.

ROBIN HOOD: MEN IN TIGHTS is a spoof of Kevin Costner’s ROBIN HOOD. Classically Mel Brooks, this film is a good-natured send-up both of Costner’s ROBIN HOOD and all things current. As humor goes, this is a gentle movie. When Robin of Loxley arrives home from the Crusades, he finds his entire family, except for a blind servant, either dead or murdered, and his castle being hauled away by the evil Prince John of Rottingham. Robin vows to restore order and justice to Rottingham and bring down the Prince. Robin meets and falls in love with Maid Marian. On one occasion, Mr. Brooks has Robin Hood make his escape from the Holy Land by swimming to England–a pointed reference to Mr. Costner’s film that elected to save money by showing Robin Hood arriving in England, but without any shot of the ship that brought him there. The rest of the plot, although satiric, follows the classic story line.

As is usual with a Mel Brooks’ film, the thinly veiled jokes on his Hollywood contemporaries are many, both subtle and striking. What sets this apart from some earlier works is that it is so…gentle. The relations between the characters are almost affirmative in nature. Just as important, Mr. Brooks has discovered good production values along the way and the acting is actually quite good. The heroine is no longer a reconfigured Jewish American Princess and Brooks’s sense of the cerebrally sublime is sharp.