SHADOW ON THE MESA 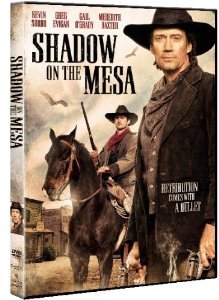 SHADOW ON THE MESA is a rousing western made for television that harkens back to the classic westerns of yesteryear. After his mother is murdered, a bounty hunter named Wes learns his long-lost father is still alive. Wes travels to his father’s ranch to learn about the past. He discovers Ray thought his wife died years ago. Meanwhile, Ray’s involved in a range war with a vicious neighbor, who wants to buy Ray’s land, or steal it. Wes sides with his father.

SHADOW ON THE MESA pays homage to classic westerns like RED RIVER, SHANE, and RIO BRAVO. It has elements of all three movies, but mixes them into an appealing new story that feels contemporary. Wes Brown does a good job making the hero likeable. He’s ably assisted by the other cast members, which include Kevin Sorbo as the long-lost father. SHADOW ON THE MESA has a strong moral, pro-family worldview, with a Christian prayer near the end. There are a lot of gunfights, so SHADOW ON THE MESA isn’t for younger children. Older family members, however, will enjoy this entertaining western.

(BB, CC, PP, VV, A, M) Strong moral worldview is pro-family, with an overt Christian prayer to “the LORD” at the end, including a recognition of an afterlife in Heaven, plus a positive view of American settlers in the Wild West and a story about justice; no foul language; strong action violence includes gunfights, gunfights where men are murdered, a murder that took place off-screen is mentioned, dynamite explosion, man wounded with blood on his mouth and torso, man shot in leg, it’s implied that one character is shot in the back but you only see the gun firing; no sex; no nudity; alcohol use; no smoking or drugs; and, bullying, attempted fraud, attempted theft, and talk about Comanchero Hispanics attacking a wagon train and trying to sell a man to some Comanche Indians.

SHADOW ON THE MESA is a rousing western made for television that harkens back to the classic westerns of yesteryear, but that has a nice contemporary feel for modern audiences to appreciate. There’s a lot of gun violence, but it’s a family-friendly production otherwise, with a strong moral worldview.

The movie begins with bounty hunter Wes Rawlins bringing in a desperado. The man’s friends ambush Wes, but they fail. One of them is a teenager who surrenders, and Wes lets him go. However, the desperado gets killed in the crossfire.

Wes travels home, only to find his mother has been murdered. When she was pregnant with Wes years ago, a group of Hispanic Comancheros attacked the wagon train she and her husband, Ray, were accompanying. She almost died, but was found by a couple of kindly pioneers. They took her in, and seven months later, she gave birth to Wes, but Ray was never seen again. Wes and his mother took the last name of the two settlers.

When Wes returns, his adoptive grandfather, Jake, tells Wes that, before she died, his mother had found out that Ray was still alive and owns a ranch. She wrote Ray a letter, but never heard back from him. That’s when she was murdered by unknown strangers.

Wes decides to seek out Ray on his ranch. He discovers Ray never got his mother’s letter, and always thought she died in the Comanchero raid. After he escaped from the Comancheros, Ray went back and just found a mass grave.

Meanwhile, Ray is now involved in a range war with a vicious neighbor, who wants to buy Ray’s land, or steal it. Wes decides to side with his father and his half-brother and sister.

SHADOW ON THE MESA pays homage to classic westerns like RED RIVER, SHANE, and RIO BRAVO. Its story has elements of all three of those movies, and more, but mixes them into an appealing new story that appeals to today’s viewers. Wes Brown does a good job of making the hero, Wes Rawlins, likeable right away. He’s ably assisted by the rest of the cast, which includes Kevin Sorbo as the hero’s long-lost father.

The plot of SHADOW ON THE MESA focuses on the restoration of a family. Like a classic fairy tale, it begins with the death of a family member. The hero has survived this tragedy, and now he must mete out justice to the villain responsible for the transgression. In the process, the hero finds the family he didn’t know he had.

SHADOW ON THE MESA has a strong moral, pro-family worldview, with a short Christian prayer acknowledging God and the idea of a possible afterlife in Heaven. There is a good family and a bad family, and the good family must defend itself from the bad family wishing it harm. This means there are a lot of gunfights in the movie, with a little blood, so SHADOW ON THE MESA isn’t a movie for younger children. Older family members, however, will enjoy this entertaining western.