"The Power of God’s Love" 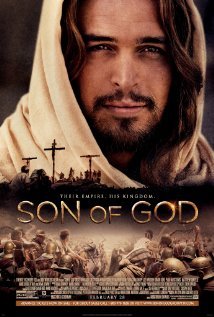 SON OF GOD begins with John narrating God’s promise and covenant with His people through Israel’s history as the Romans take control of the countryside. After showing the birth of Jesus, 30 years later Jesus approaches Peter to call him to join His mission to change the world. Jesus is confronted Pharisees regarding his teaching and the miracles. Then, as conflict mounts between the Romans and the Jews during Passover, Jesus enters Jerusalem on a donkey. The crowds and tension around Jesus increase as Jesus begins His journey to the Cross.

SON OF GOD is a captivating showcase of God’s grace. The acting is excellent, including the powerful ending. The movie is life changing, but the pacing could be tighter. Thus, the movie opens strongly, but the first half is a too episodic. Also, some biblical episodes, including dialogue, seem too truncated. That said, the conflict between Jesus and the Jewish and Roman leadership is strong. Also, the movie has a powerful resurrection sequence. SON OF GOD clearly shows that the death and resurrection of Christ is a glorious reminder of God’s love.

(CCC, BBB, VV, A, M) Very strong Christian, biblical worldview about the Gospel of Jesus Christ; no foul language; strong violence with blood includes a child dying under a tipped over cart, Romans slaughter Jews in one scene, Jesus and others are crucified brutally, people are whipped, stabbed, and beaten; no sexual content; upper male nudity; light drinking of wine; no smoking; and, betrayal and greed are shown negatively.

SON OF GOD is a captivating theatrical version of the Jesus portion of the History Channel’s THE BIBLE miniseries produced by Roma Downey of TOUCHED BY AN ANGEL and her husband Mark Burnett, executive producer of the SURVIVOR and SHARK TANK television shows. Roma and Mark are two extremely talented, committed Christians in Hollywood who have achieved a tremendous level of success in the entertainment industry.

SON OF GOD begins with John narrating God’s promise and covenant with His people through Israel’s history and up to the control and tension under the Romans. After showing the birth of Jesus, 30 years later Jesus approaches Peter to call him to join His mission to change the world.

Jesus confronts the Pharisees through his teaching and the miracles He performs as He travels the land with His apostles. Finally, as tension mounts between the Romans and the Jews during Passover, Jesus enters Jerusalem on a donkey. The crowds around Jesus increase as Jesus goes to the temple and overturns the tables of the moneychangers.

The high priest Caiaphas decides that Jesus must be killed, and he finds out that one of Christ’s apostles, Judas, is ready and willing to betray Jesus. Things escalate and Jesus is arrested, condemned to death and crucified.

Of course, the story doesn’t end there. Three day later, Jesus rises from the dead and sends His disciples on the great commission to spread the Gospel to the ends of the earth. Also, the disciples are filled with the power of the Holy Spirit on Pentecost, during which Peter preaches to the crowd gathered near the temple in Jerusalem. The movie concludes with John, in a cave, where Jesus visits him one last time and reveals the final words of Revelation.

SON OF GOD is a captivating showcase of God’s grace and love by giving His one and only son, Jesus. The acting is excellent throughout, including the powerful ending. The movie’s message is life changing. However, the pacing could be tighter. For example, though the movie opens strongly, the first half is too episodic. This problem might be fixed with some narration, some cutting, and adding better transitions. MOVIEGUIDE® also thought the baptism of Jesus by John the Baptist should be inserted in the beginning instead of just used in flashbacks later. The middle also could use some narration to link the episodes more tightly together.

SON OF GOD is not an encyclopedic version of Jesus Christ’s ministry or of all the events and dialogue that takes place before, during, and after the Last Supper. Thus, some parts of the New Testament Gospels are a bit truncated. Also, the biblical dialogue is put into modern-day vernacular. Consequently, some theological, biblical gaps occur. For example, the original Last Supper reported in the Bible was a seven action communion chaburah supper in the fulfillment of the Jewish tractate Berakah (blessings) of the Mishnah. To simplify, Jesus took every aspect of the Berakah of the Mishnah to demonstrate in word and deed that He was the fulfillment of the ancient God ordained thanksgiving for God’s redemption. The movie ignores the dramatic theological elements in that liturgy. Liturgy is drama. The Last Supper was a very dramatic event.

Also, the Apostle Thomas never says, “My Lord and my God” when he sees that Jesus is really physically there. That line would reinforce the movie’s overt references to the Deity of Jesus. Also, Jesus never says during the movie’s teaching part, or it’s not stressed, that He’s come to “give his life as a ransom for many,” as He does in Mark 10:45, which is, of course, the Gospel message that Jesus “died for our sins” (see 1 Corinthians 15’s description of the Gospel).

At the end, the filmmakers could have added to the power of their ending by inserting a more overt rendition of the “Great Commission” in Matthew 28:18-20, where Jesus tells his disciples to 1. Make disciples of all nations, 2. Baptize them in the Name of the Father, the Son, and the Holy Spirit, and 3. Teach them everything that I, Jesus, have taught you. The Sermon on the Mount was also a bit truncated.

That said, the conflict between Jesus and the Jewish and Roman leadership is strong, as are the scenes detailing the Passion as Jesus is beaten, tried, whipped, etc. Best of all, perhaps, the movie has a powerful resurrection sequence.

SON OF GOD clearly shows that the death and resurrection of Christ is an overwhelmingly glorious reminder of the power of God’s love. Thus, MOVIEGUIDE® urges everyone to see this movie and bring their friends and family, saved and unsaved.

Rent or Buy SON OF GOD: