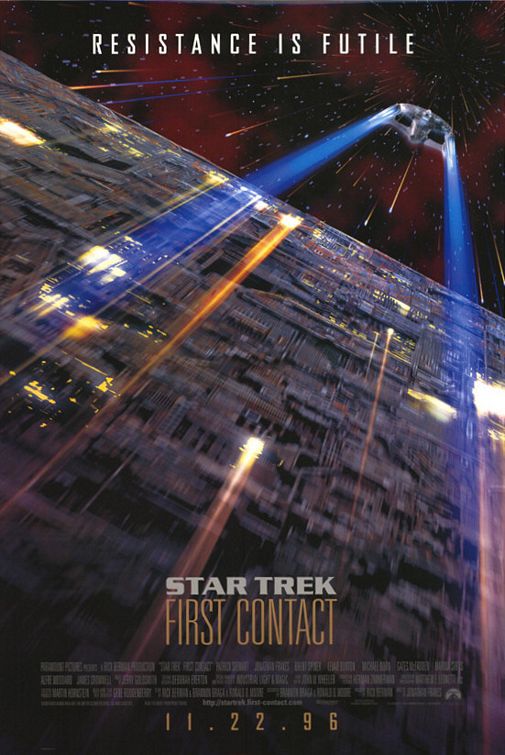 In STAR TREK: FIRST CONTACT, the crew of the Starship Enterprise fight the evil Borg, who claim that "resistance is futile." Containing themes that involve the future of earth and mankind, it has a moral but godless worldview. This movie also contains moderate violence and some unnecessary foul language.

STAR TREK: FIRST CONTACT is the 8th movie based on the popular TV program. Capt. Picard and the crew of the Enterprise discover the evil cyber-villains, the Borg, have entered Federation Space. The Enterprise blows up their ship, but a Borg contingent goes back in time to destroy a missile complex base on earth. The base holds a scientist and his rocket ship which will lead to “first contact” — the first meeting between humans and beings from another planet. This meeting ultimately yields the birth of the United Federation of Planets. If the Borg succeed, then they can alter the future and erase their enemies. If they lose, the future of mankind is saved.

This movie has all the elements that you would expect from a STAR TREK movie – great ensemble acting, special effects, horrible villains, and waxing philosophies. The goal of the Borg is to assimilate all life-forms into their own through brainwashing and cyber-fication. They all think the same and individuals are non-existent. Their world-view is very similar to communism, and the movie has anti-communism themes. STAR TREK: FIRST CONTACT has violence, scary situations and some foul language. This movie serves as a suitable launching pads for future film projects by THE NEXT GENERATION crew.