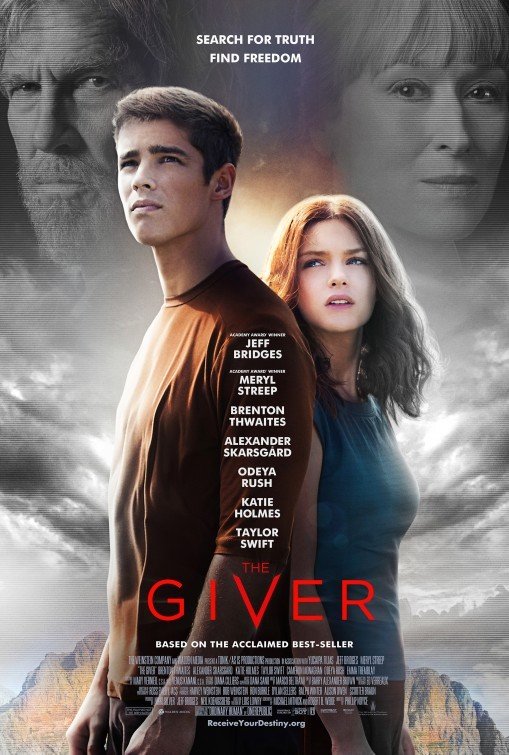 THE GIVER is a science fiction movie about a young man who defies a tyrannical society. Jonas lives in a dystopian society where memories are outlawed. To prevent unhappiness, the society forces Jonas and others to live without color or feeling. When Jonas turns 18, he and his friends are assigned jobs. He then is assigned to receive all the memories of the past from the only other person allowed to know them. When Jonas starts to receive the memories, he realizes the whole community should have the same spectrum of emotions locked inside those memories. This means, however, that he must defy the authorities.

THE GIVER is an absorbing, inspiring science fiction fable with no crude content and a pro-life message. It has a clear storyline, with some fine acting. THE GIVER has a strong Christian, moral worldview attacking authoritarian government and euthanasia. There’s also a baptism scene and important references to the Christmas song “Silent Night.” These are mixed with some light Romantic, pagan elements, but, ultimately, love, faith, family, and self-sacrifice are extolled. Media-wise, freedom-loving viewers should enjoy THE GIVER.

(CC, BBB, ACACAC, Ro, FR, Pa, PC, E, V, MM) Strong Christian, redemptive allegory promoting love and faith with very strong moral, anti-statist content, including baptism is shown, the Christmas song “Silent Night” is heard twice as a symbol of hope and love, a pro-life message includes an anti-euthanasia message, the importance of families loving each other is shown, and self-sacrifice is exalted, mixed with some Romantic elements of following your heart and defying authority, some false religious/pagan elements include a Muslim prayer, Sufi dancers, witch doctor, and a Hindu worshippers inserted, and some politically correct elements such as an environmentalism message wherein an elephant is shot by hunters; no foul language; light violence but nothing graphic such as main character hits his friend in the face, chase scene, main characters falls off cliff but is okay, baby injected with a poison that kills it; no sex scenes or sexual immorality but teenagers kiss a couple times; no nudity; no alcohol use; no smoking or drug use; and, lying.

In THE GIVER, Jonas lives in a dystopian society, but when he receives memories of the past, he learns his community is missing out on some of the greatest elements of living. THE GIVER has a strong Christian, redemptive worldview extolling love, faith and life, but some caution is warranted.

Jonas lives in a dystopian society without color or feeling. When he turns 18, he and his friends are assigned jobs. Jonas is assigned a special position as the Receiver of the memories. Not knowing what that means, Jonas is nervous, but he goes to the edge of the community to meet the Giver. The Giver is an older man who has all the memories of history that he must pass down to Jonas. Jonas and the Giver are the only people in the community that will know the real history of the world. The community leaders have decided that those memories of pain, death, sorrow, happiness, joy, etc., prevent humanity from organizing a happy society. In order for the community to be rid of all these emotions, each member takes an injection every morning.

As Jonas receives the memories from the Giver, he starts to think that everyone should feel these emotions. Deciding not to take his morning injections, Jonas starts to feel more and fall in love with his childhood friend, Fiona. Fiona works in the nursery with the newborn babies. Each baby is given out to a family unit to be raised by that unit. When the baby isn’t growing properly or has some deformity, it’s killed. Only Jonas realizes the tragedy of the killing of the baby. When his family unit takes in a baby, he starts to feel attached and decides to give some of the memories to the baby. One day Jonas sees his father taking the baby to the center to be killed the next day. This spurs Jonas into action. He decides to save the baby and to destroy the border of memories so the people can be human again.

THE GIVER is an interesting, inspiring movie based on a best selling novel. THE GIVER has a clear storyline with good acting. The memories Jonas receive look like stock photography, but otherwise, the production values are high quality. The movie will definitely interest its audience of older children and teenagers.

THE GIVER has a strong Christian, redemptive worldview with a strong moral, anti-statist message attacking humanist schemes promoting a big government that controls each and every person. The movie extols love, compassion, self-sacrifice, and faith. There’s also a baptism scene and a couple important references to the Christmas hymn “Silent Night.” These are mixed with some light Romantic and politically correct elements. Also, the movie inserts references to false religion, Islam and Hinduism in a couple scenes, but these are overwhelmed by the movie’s Christian, redemptive, moral content. There are clear pro-family and pro-life messages, including the plot to save the baby. Furthermore, there are many clear Christian references and allegorical elements. Media-wise, freedom-loving viewers should enjoy THE GIVER.

Rent or Buy THE GIVER: