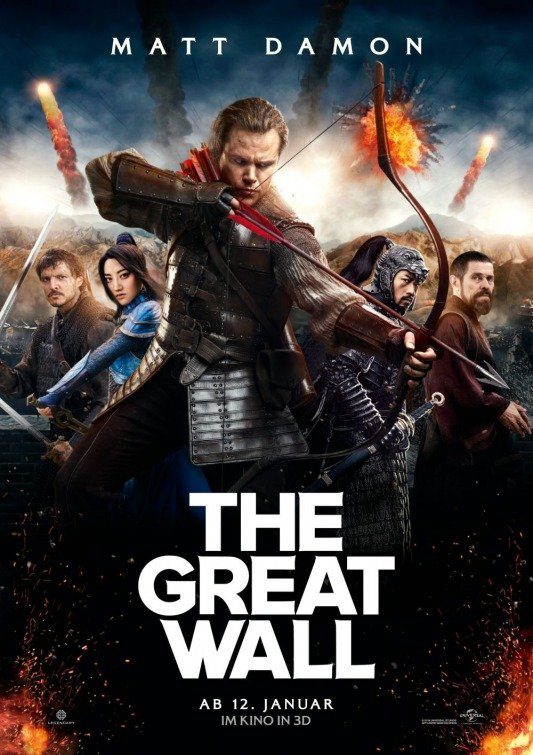 THE GREAT WALL stars Matt Damon leading a small band of rugged, mercenaries trying to steal and smuggle out the recent invention of gunpowder. Chased by Chinese forces, they run into the Great Wall of China and captured. They are about to be executed when suddenly thousands of rampaging alien monsters attack the wall. An impressive battle sequence begins. Damon’s character, William, springs into action, saving numerous soldiers. William and his partner are suddenly heroes. The rest of the movie consists of impressive battle sequences and comical banter.

THE GREAT WALL is ridiculous fun, mixing medieval battle movies, Chinese culture and science fiction together into a non-stop action-packed romp. The dialogue is wooden and direct at first, but the movie picks up during and after the first big battle scene. The movie promotes sacrifice and even prayer, but it’s mixed with some anti-capitalist moments rebuking greed by extolling serving the common good and helping the collective. There’s also lots of action violence and brief foul language. Overall, however, THE GREAT WALL is an entertaining time at the movies for teenagers and adults.

(P, B, C, Acap, So, L, VV, M) Light mixed worldview with some moral elements, hero says he once worked for the Pope and his friend says they need time to pray when it appears they’re going to be executed, mixed with some anti-capitalist, pro-socialist symbolism opposing greed and favoring sacrificing for the collective (movie is a Chinese-American production) but also sacrificing for the common good; eight obscenities and no profanities; lots of strong action violence includes numerous battle scenes between Chinese forces on top of and within the Great Wall, rampaging alien beasts, the aliens are four-legged and green with vicious teeth, flaming cannonballs, leaping acrobatic soldiers attached to bungee cords, hundreds of archers shoot arrows are all regular parts of the movie, lead mercenary teaches other soldiers to kill the alien beasts using spears and swords aimed directly at their throats or eyes, one battle scene features beasts getting impaled with arrows and spears and includes green blood flying everywhere, another scene features sharp blades that slice alien bodies in half, a soldier heroically allowing himself to explode using gunpowder to save the day against the beasts via sacrifice, a human soldier is shot in the neck with an arrow, and creatures are seen eating some of the soldiers in quick glimpses; no sex; no nudity; no alcohol; no smoking or drugs; and, greed but it’s rebuked thru the movie’s notion of sacrificing oneself for the collective.

THE GREAT WALL stars Matt Damon in a science fiction adventure about a medieval mercenary looking to steal gunpowder from China who gets captured and then becomes a hero by leading the Chinese in a battle against hordes of marauding alien beasts attacking the Great Wall. THE GREAT WALL is ridiculous fun, mixing medieval battle movies, Chinese culture and science fiction together into a non-stop, action-packed romp, but caution is advised for older children.

The movie starts by showing a small band of rugged, heavily bearded medieval mercenaries led by William (Matt Damon), The mercenaries are in China trying to steal and smuggle out the recent invention of gunpowder. They are hiding in a cave from Chinese forces seeking to punish them when they are attacked suddenly by a shadowy alien creature, and William saves them all by cutting the creature’s arm off, sending it hurtling off a cliff.

The next day, William and one other mercenary ride away to further evade their pursuers, only to run into the Great Wall of China. They find themselves stopped by a hailstorm of arrows shot from the top of the wall by an army of archers. Captured, they are in danger of being put to death by female Commander Lin (Tian Jing), when suddenly thousands of rampaging alien monsters attack. The Chinese soldiers fight off the alien invaders with flaming cannonballs, arrows, swords, spears, and acrobatic diving female soldiers in an impressive battle sequence.

William is cut loose of his prisoner bindings by another Westerner named Ballard (Willem Dafoe), who’s been living at the Wall as a prisoner for 25 years for trying to smuggle gunpowder too. William springs into action, saving numerous soldiers from attack. He shows them how to defeat the beasts: by spearing or shooting arrows into their mouths and thus striking their hearts.

William and his partner are suddenly heroes. The rest of the movie consists of impressive battle sequences and fun banter as the two Westerners and Ballard learn to adapt to the Chinese culture of team thinking and away from their selfish natures in order to survive and win the battle.

THE GREAT WALL is ridiculous fun, mixing medieval battle movies, Chinese culture and science fiction together into a non-stop action-packed romp. It’s nice to see Damon take such a major step in a fun direction, away from his usually serious-minded movies. Also, the culture clash friendship that forms between William and Commander Lin teeters on the edge of romance without ever crossing from friendship.

It’s refreshing to see a woman given full respect in a movie, and not treated as a mere love interest or sex object. This also reflects Chinese culture’s hesitance to show kissing or any romantic or sexual content.

The dialogue is wooden and direct at first, with an overt expository quality that makes the movie seem like it’s going to be worthy of mockery before the first big battle. From there, however, the script loosens up a lot, with frequent funny asides and banter, and a self-aware sense of humor about how ludicrous the situations in the story all are.

While the monsters are vicious, the writers and director have managed to keep everything pitched at a level that older children and teenagers can easily enjoy without being traumatized. Basically, THE GREAT WALL is more like an Indiana Jones movie than anything else.

The movie shows the value of turning away from selfishness and of the admirable quality of sacrificing oneself to save others. There is a positive Christian, moral reference to prayer, combined with some symbolic anti-capitalist moments calling out greed and extolling the collective. There’s also lots of action violence and brief foul language. Overall, however, THE GREAT WALL is an entertaining time at the movies for teenagers and adults, with some caution required.

Rent or Buy THE GREAT WALL: