"Debauchery Proves To Be Unsatisfying" 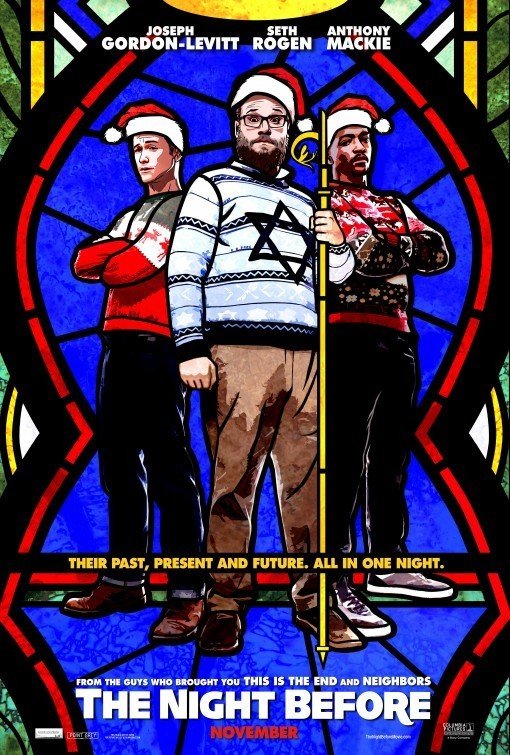 THE NIGHT BEFORE is about three longtime friends who team up for one last crazy Christmas Eve together full of drugs before facing greater life responsibilities. The movie stars Seth Rogen as Isaac, a nice, sloppy, married Jewish man waiting his first child’s birth. Joseph Gordon-Levitt plays Ethan, a musician who’s been spinning his wheels in life since the death of his parents 14 years ago. Finally, Anthony Mackie is Chris, an NFL athlete suddenly having the best year of his career at an age when he should retire. The men have been partying every Christmas Eve for the past 14 years to cheer up Ethan, but this year comical complications ensue.

THE NIGHT BEFORE is a manic movie that’s funny in parts and ultimately makes a series of positive moral, redemptive points about faith, friendship, marriage, and family. However, it’s packed with foul language, substance abuse and lewd, irresponsible behavior. Discerning viewers seeking Christmas entertainment would be much better served and entertained by something else that’s not R rated. Despite the ending, media-wise viewers will find THE NIGHT BEFORE unacceptable entertainment.

(PaPaPa, RoRo, HoHo, AbAb, B, C, LLL, V, SSS, NNN, AA, DD, MM) Very strong pagan worldview with some strong Romantic elements, homosexual elements and a scene at a midnight Mass with some blasphemus content, set during Christmas Eve and Christmas, slightly redeemed by some moral, redemptive content at the end extolling faith, prayer, friendship, marriage, and family; at least 125 obscenities (mostly “f” words) and 11 profanities; a brief street fight with a couple of punches and a quick chase scene where a limo driver races recklessly through a red light and gets hit; very strong sexual content includes brief sex scene in bathroom includes oral sex, a fantasy sequence a man on drugs experiences involves him in a strip club with his wife cheering on their grown-up daughter as she dances in skimpy clothing, sexting, and some crude homosexual references includes a joke about the men planning to have sex together, but it never happens; images of male genitals in a photo shown; characters drink heavily throughout movie with drunkenness depicted; characters engage in drugs throughout much of the movie, married man’s wife gives him box filled with all manner of illegal drugs, from marijuana to cocaine and psychedelic mushrooms, before he goes out for the night, as a “reward” for having been “responsible” all year, but drugs cause man problems throughout story; and, strong miscellaneous immorality includes reckless behavior throughout the movie including destruction of property caused by their foot and vehicle chases.

THE NIGHT BEFORE is about three longtime male friends who team up for one last crazy Christmas Eve together full of drugs before facing greater life responsibilities. THE NIGHT BEFORE has a strong pagan worldview with strong Romantic tones, some homosexual references and lots of crude content and foul language before its morally uplifting, redemptive ending enters the picture.

The movie stars Seth Rogen as Isaac, a nice but sloppy, married Jewish man awaiting the birth of his first child. Joseph Gordon-Levitt plays Ethan, a musician who’s been spinning his wheels in life ever since the sudden death of his parents 14 years before. Finally, Anthony Mackie is Chris, an NFL athlete suddenly having the best year of his career at an age when he should be forced to retire. The three of them have been going out every Christmas Eve for the past 14 years to cheer up Ethan at the “loneliest” night of the year, but this year involves some added complications.

With Isaac about to take on the added responsibilities of fatherhood, the trio have already agreed that this year will be their last wild romp. The guys know they have to make it count, and Ethan finds the perfect solution when he steals three tickets to New York City’s most exclusive party of the year, the Nutcracker Ball, where the best DJs and the wildest psychedelic drugs await the city’s hottest singles.

The party alone would make a crazy night, but Chris is eager to break into the posse of his team’s superstar quarterback and promises to bring him a load of primo marijuana. That quest leads to all manner of havoc, as the pot gets stolen by a woman who hates Christmas, and they have to chase her all over the city to get it back.

Add in multiple run-ins with their high school drug dealer, Mr. Green (Michael Shannon), Ethan’s attempts to win back his girlfriend (Lizzy Caplan) and settle down, an outrageous drug trip in the middle of midnight Mass for Isaac, and a surprisingly winning cameo by Miley Cyrus, and THE NIGHT BEFORE is a manic movie that’s funny in parts and ultimately make a series of positive moral, redemptive points about faith, friendship, marriage, and family.

THE NIGHT BEFORE is packed with profanity, a wild bathroom sex scene and a whole lot of drug humor, not to mention the drug trip during Mass that ends in a blasphemous manner. All this crude, drug-fueled content is en route to a moral, redemptive happy ending.

For example, one character is shown engaged in serious, genuine prayer with his mom at the end over Christmas dinner. He also decides he needs to make a public announcement he’s been using steroids in his athletic career. Another man decides it’s time to settle down and truly get to know the parents and family of his longtime girlfriend since he’s going to marry her, and the married couple’s discussion of marriage and having children is shown very favorably. Eventually, the married father is shown fully loving his newfound commitment and embracing clean living.

That said, discerning viewers seeking solid Christmas entertainment would be much better served (and more entertained) by THE 33. MOVIEGUIDE®’s editors know of friends and family members who overdosed on drugs or killed themselves with debauchery. It’s not a pretty picture. Staying sober, enjoying one’s family, and following Jesus Christ are SOOOO much better! And, a lot more fun and satisfying!!!

Starring: ** Debauchery Proves To Be Unsatisfying **

Audience: Older teenagers and a