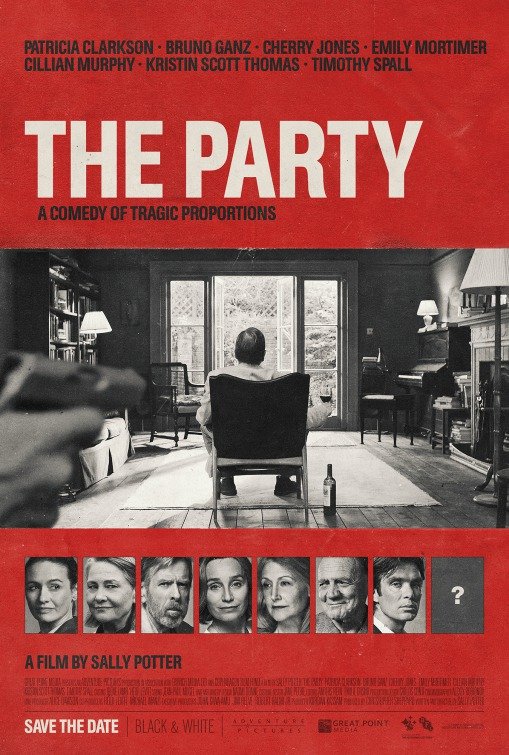 THE PARTY is a dark British satire. It takes viewers on a dark journey revolving around the twisted story of a middle class, liberal group of seven friends and unexpected secret lovers. Janet is throwing a dinner party to celebrate her recent election as a Shadow Minister of Health for the opposition party. Information is revealed within this close circle of friends to create enough conflict that results in the people never actually getting to have dinner. The situation erupts into an emotional explosion that’s more like a war zone than a party.

THE PARTY takes viewers inside a whirlwind of dark, comical, unexpected twists and turns. Shot in black and white, the storyline is full of intentionally overly dramatic situations, despite some compelling, witty, insightful lines and developing situations. THE PARTY also contains a high amount of questionable content. It suffers from a strong pagan, mixed worldview having elements of false religion, references to atheism, overt homosexual content, feminism, plenty of strong foul language and marital infidelity, and some cocaine use. Media-wise viewers will want to stay away from THE PARTY.

(PaPaPa, FeFe, HH, FRFR, C, O, HoHoHo, AcapAcap, LLL, VV, SS, A, DD, MMM):
Dominant Worldview and Other Worldview Content/Elements:
Very strong, somewhat mixed pagan worldview throughout as seven characters have no guiding belief system, some overt pro-feminist elements from a leftist viewpoint but one woman attacks one feminist character’s intelligence, some characters are self-declared atheists yet question the afterlife when their lives are suddenly threatened with death, one character seems to be spiritual but in a New Agey way with no defined religion or beliefs and mentions karma and makes Christian-sounding comments like “seek and you will find” and “no one is beyond saving” but doesn’t specify in which manner one can be “saved,” a character who knows he’s dying asks questions like “can faith save me” yet, again, doesn’t define in which manner of faith and seems to believe that a curse or voodoo has sickened him, most characters seem to be governed by a non-systematic belief system where anything really goes, plus two of the seven main characters are in a lesbian relationship and there’s some strong anti-capitalist elements where a wealthy young banker is actually a troubled man who snorts cocaine and has some bad intentions;
Foul Language:
19 obscenities (nine or 10 “f” words), two to four light profanities, and British expletives such as “bloody” and “wanker,” plus a few characters get sick for different reasons and vomit in the toilet or in the bathtub;
Violence:
Strong violence includes a few characters interact in small fights with slapping and punching, a moderate amount of blood, one character pulls a gun on another. one character kneels down on broken glass and knee begins to bleed, character bites herself out of anger and frustration, terminally ill character collapses, and man at party secretly has a gun;
Sex:
Strong sexual content and immorality includes multiple characters are engaged in adultery off screen, two feminist women are “married” and one of them is pregnant with male triplets, and multiple sexual innuendoes and insinuations, but no sex scenes shown;
Nudity:
No nudity;
Alcohol Use:
Characters drink champagne, wine and whiskey throughout dinner party and woman drinks while pregnant, but no apparent drunkenness;
Smoking and/or Drug Use and Abuse:
A few characters smoke cigarettes casually and one character does cocaine a few times in restroom;
Miscellaneous Immorality:
High amount of miscellaneous content includes examples of lying and deception, elements of revenge as information is revealed of secret adulterous, one character is very cynical and verbally mocks other people, other nastiness occurs, multiple examples of moral relativism throughout, and although movie seems to satirize middle-class liberals in England, it appears still to be from a left-wing viewpoint and there’s no apparent redemption in the end.

THE PARTY is a dark British satire about middle-class liberals and their shortcomings, hypocrisies, conflicts, and contradictions.

The movie begins with Janet throwing a dinner party with all of her closest friends to celebrate her new promotion as a shadow health minister for the opposition party in England. As her friends begin to arrive, there appears to be mysterious conflicts at work within the group. Janet keeps receiving incriminating texts and phone calls that appears to be from a lover who’s clearly not her husband. Her friend, Martha, and her lesbian “wife,” Jinny, have just been informed that Jinny’s artificial insemination has gone exceedingly well, and she’s now pregnant with male triplets.

Meanwhile, Janet’s husband, Bill, is acting extremely strange, and is quietly sitting in the living room in an almost unresponsive state. Another guest, a wealthy banker named Tom, seems to be totally on edge and uneasy, as he continues to go to the bathroom to do cocaine in a frantic state. Finally, Janet’s cynical, more radical best friend, April, has snide comments for just about everyone, including her New Agey boyfriend, Gottfried, but especially for the politically correct lesbian couple.

As this dinner party continues, more and more information begins to be revealed that causes multiple conflicts within the group. Apparently, Janet’s husband has just been informed he’s dying from an incurable disease. Upon finding out this information, Janet decides to end her love affair and focus her attention immediately on her dying husband. Amidst this dark announcement, Martha and Jinny learn they’re not exactly on the same page within their marriage regarding the three boys currently growing inside Jinny.

Before dinner is even served and inevitably burns in the oven, the group begins to learn of secrets between their lovers and friends. Everything erupts into an explosion that appears to be more of a war zone than a dinner party.

Shot in black and white, THE PARTY is a black comedy that can be compared to the likes of CLUE (1985) or BURN AFTER READING (2008), with a strange and somewhat twisted storyline that can’t be easily predicted. Clocking in at 71 minutes, this movie fits many twists and turns into a rather short movie, with no time for viewers to sit back and relax between all the many conflicts between characters. This movie will have fans of dark satire laughing hysterically at times and at other times leave viewers with jaws to the floor. However, the movie is made purposely in an overly dramatic fashion, with inflated and unrealistic conflicts. That said, THE PARTY can be thoroughly enjoyable when watched with this understanding.

Despite some insightful albeit frequently acerbic dialogue, THE PARTY presents very little moral value or compass, with characters led in a “whatever goes” manner. For example, Bill is a self-declared atheist until he becomes fatally ill, and then begins to ask questions about the afterlife and wondering whether he can be saved by faith. April’s older boyfriend appears to be spiritual, but rather New Agey and is never clearly defined by an exact belief system. However, he does declare that he believes no one is beyond saving and that if you seek, you will find, although he doesn’t specify what one will find or by whom one is saved.

Thus, THE PARTY has a very strong pagan, somewhat mixed worldview with some feminist elements, some references to personal atheism, some false religion, and some Christian, redemptive allusions. Also, two of the seven main characters are in a lesbian, same-sex “marriage,” and one of the women is pregnant with male triplets. Furthermore, there’s some strong anti-capitalist implications because the wealthy banker at the party, though he’s working with the female dinner host, is a troubled man who has a cocaine habit. Finally, THE PARTY contains plenty of strong foul language and characters who are committing adultery. In fact, much of the movie’s conflict revolves around marital infidelity.

All in all, therefore, media-wise viewers probably will want to stay away from THE PARTY. In the end, there seems to be little or no redemption at this wild dinner party.