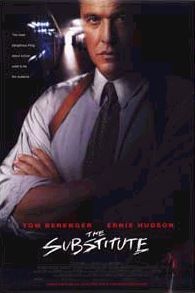 In THE SUBSTITUTE, a mercenary replaces his injured teacher/girlfriend and fights a principal and gang leaders who are distributing drugs at a Miami high school. The anti-drug message loses its moral impact in the atmosphere of extensive violence and obscene language. It is an action picture of might-making-right moved from the battle zones into a school.

In THE SUBSTITUTE, the battle lines are drawn: mercenaries vs. drug dealers. The setting for the movie is a public school where the drug dealers are the school principal and gang members in his employ. Shale played by Tom Berenger is a tough mercenary. His girlfriend, Jane, teaches at the high school and has publicly chased down the leader of the Kings of Destruction gang at her school. She is physically attacked, so Shale uses false credentials to act as her substitute. He quickly presents himself as a powerful violent force. It isn’t long before Shale discovers the principal’s dirty deeds. Shale intervenes and the drug dealers end up suffering his wrath.

While the movie does take a moral position by portraying gang members and drug dealers as bad and unsavory, any positive message is lost in the extensive violence. Shale relies on his own power, murder and fraud to catch the drug dealers. Their sense of justice is brutal and flawed. Fighting escalates to a climax of non-stop violence. Shale emphasizes education as a means for getting ahead, yet offers no solution to the violence and drugs. More than anything, by showing a corrupt principal and a sadistic vigilante teacher, THE SUBSTITUTE it provides no positive role models who can suggest a peaceful solution. THE SUBSTITUTE fails in his mission.