"The Lord Giveth and the Lord Taketh Away" 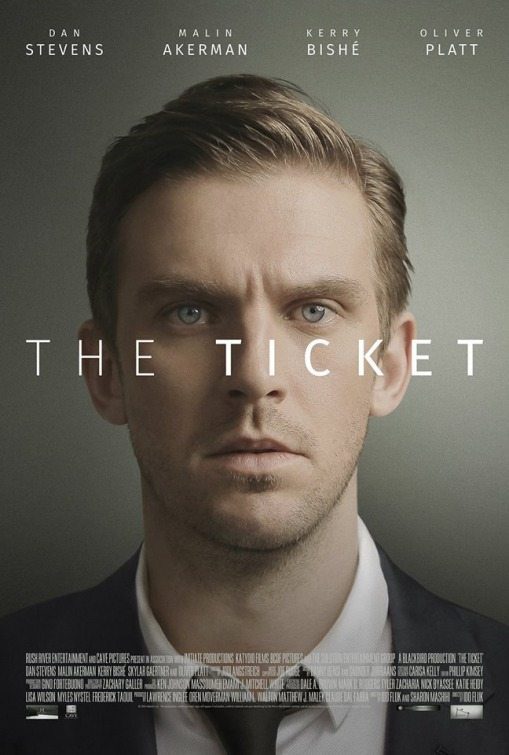 THE TICKET is an arthouse drama about a blind telemarketer for a realty firm who suddenly regains his sight. Regaining his sight gives James a new lease on life. He starts dressing up at work and hustling more. This results in a promotion. He finds a way for more sales by targeting people in debt. However, his wife is worried about the new James. James accuses her of being afraid of losing control over him. He may be right about that, but it’s no excuse when he leaves his wife and son for a beautiful co-worker. Will James get his comeuppance?

THE TICKET deftly tells a compelling story. The acting is top notch. Some of the dialogue is insightful. There are some positive references to God, prayer and church. However, although there’s no explicit content, James does commit adultery. The movie also contains one obscenity and five light profanities in a moment of surprise and a moment of distress. Finally, THE TICKET shows James getting his comeuppance, but the ending is depressing. God just leaves James in literal and figurative darkness.

(B, C, L, V, S, N, A, M) Light moral worldview in that move is a morality tale about a man who misuses a gift from God so that God eventually takes the gift away, with some positive references to God and church, and man berates the protagonist for not taking his faith seriously enough, telling him he should consider going to church; one “ah” obscenity and five light profanities by blind protagonist that are a bit borderline because of their context (four of them occur during a desperate prayer to God for help); light violence when man punches another man and throws him out of his house and a distraught man knocks things off his desk at home, plus man’s son has a black eye from a school bully; no depicted sex, but man leaves his wife for another woman, man kisses the other woman when the clothed woman poses seductively, one scene shows them sitting up in bed talking; upper male nudity in a couple scenes (one scene at a pool) and woman’s naked back is shown as she sits up in bed but nothing explicit shown; alcohol use; no smoking or drugs; and, jealousy.

THE TICKET is a drama about a blind telemarketer who suddenly regains his sight but becomes a jerk and leaves his wife and son for another woman, his co-worker, even though he prays to God. THE TICKET is a kind of morality tale where the protagonist eventually is punished for his sins, but it’s a rather depressing ending so the movie’s message is too vague and unrealized.

The movie opens with his James and his wife, Sam, talking in bed. James tells a joke about a man who prays to God for 50 years to win the lottery. When an angel asks God to let the man win the lottery, God says he would gladly let the man win, but he’s never bought a lottery ticket. This scene is shot in nearly total darkness with only a couple blurry lights traveling across the screen.

His wife gets up and asks, ‘What’s the matter?” He stumbles over to her and gives her a hug, telling her he can see! Apparently, James has been blind for years, which is why the movie’s first scene was shot in almost total darkness.

The eye doctor tells James and Sam that his eyes look all right now. James tells Jonah the doctors can’t explain what really happened and that a growth in his pituitary gland just shrank suddenly.

“Then it’s a miracle,” Jonah says.

“I guess so,” James replies.

James stays home for a few days. He and his wife go dancing at the community center where they met. Then, the family takes a trip, stopping at a hotel and go to the pool. Later that night, James leaves Sam sleeping in bed and heads to the bar, where he dances with a woman.

Cut to back home. James is walking Jonah to school and asks him about a black eye he’s gotten. Jonah tells him it was just a fight and refuses to say much more about it. James learns that Jonah’s been regularly bullied at school. He berates the school principal and complains to his wife she’s not been telling him what’s been happening with Jonah.

Back at work, James displays a new work ethic. He’s even started showing up in a suit and starts making more phone sales. He soon gets a promotion to work with the realtors rather than beside his friend, Bob, a blind telemarketer like James used to be. James convinces his bosses that the company can improve its bottom line by helping people in debt sell their homes to buy smaller ones to pay off their debts.

Eventually, his wife starts getting worried about her husband’s new lease on life. James accuses her of being afraid of losing control over him.

Sure enough, James starts an office affair with the beautiful female realtor at work. Soon, he’s left his wife to live with the woman. His wife tells James he can never come back to her and his son.

So, the question not only becomes what will happen next, but will James ever get his comeuppance?

THE TICKET deftly tells a compelling story. The acting is top notch. Some of the dialogue is fraught with meaning. For instance, when Bob, the blind friend at work, tells James he’s being a jerk, James accuses him of being jealous because God finally blessed James with sight and not him. “You never bought a ticket,” Bob says, referring to the joke in the beginning. “You got one handed to you.”

Ultimately, the message of THE TICKET echoes Job’s comment in Job 1:21, “Naked came I out of my mother’s womb, and naked shall I return thither: the Lord gave, and the Lord hath taken away; blessed be the name of the Lord.” [SPOILER FOLLOWS] Thus, James does get his comeuppance in the end, but no blessing follows. So, THE TICKET ends on a depressing note, with no happy ending, unless you think Sam getting rid of James and not taking him back when he gets his comeuppance a happy ending. Perhaps, a scene showing Sam and her son finding some new happiness would have helped. Be that as it may, the depressing ending in THE TICKET, leaves the movie rather unresolved. As a result, the movie’s unsatisfying, and the message is too vague and unrealized. Essentially, God just leaves James in literal and figurative darkness.

There are no explicit sex scenes in THE TICKET, even though James leaves his wife for another woman. There’s a shot of James and the woman kissing softly in a seductive way and a shot of them sitting up in bed talking. There’s very little foul language, just one obscenity and a few light profanities, one light profanity when James regains his sight and four light profanities when he has a big problem and starts praying to God for help.

Rent or Buy THE TICKET: