"A Quest for Truth" 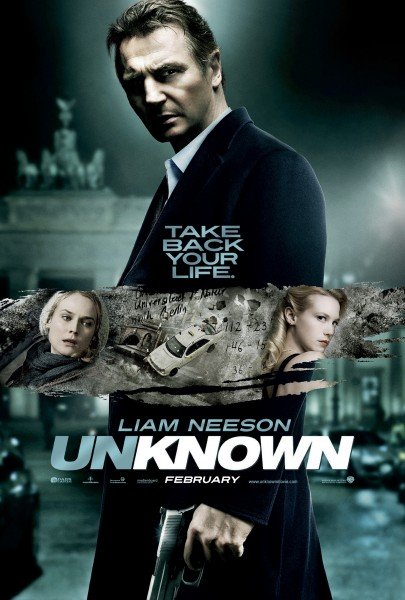 UNKNOWN is a suspense thriller starring Liam Neeson as Martin, an American scientist attending a biotech conference in Berlin with his wife, Elizabeth. When he suffers a four-day coma after a taxi accident, he wakes up to find Elizabeth married to another man who claims to be him. The taxi driver and a former East German spy turned detective try to help Martin find out what’s really occurring. Chases, assassination attempts and other complications ensue.

UNKNOWN is a refreshing, riveting suspense thriller ala Hitchcock. Neeson's character is shown as trying to do the right thing. When his true nature is revealed, he tries to reform his life, although he has to defend his life by killing some bad guys. In the end, a couple people are ready to sacrifice their lives to help him and he gets to return the favor for one of them. Because there are some mystery elements and plot twists, it is not always clear in what direction UNKNOWN is headed, including who the bad guys are. The movie also has some foul language, action violence and strong, but brief, sexual references. Extreme caution is advised.

(B, C, FR, LL, VV, SS, N, A, DD, M) Light moral, redemptive worldview with elements of finding out truth and elements of compassion and helping other, but set in a mystery spy thriller about rogue assassins, plus a moderate Muslim prince wants to improve things and do something about world hunger, so movie seems to suggest Islam can be reformed; about 11 obscenities (no “f” words), five strong profanities and three light profanities; strong action violence includes startling car accident scene destroys several vehicles and some property before a taxicab crashes through a bridge wall and into a river, hero has to be saved from drowning by his driver, car chase destroys several random vehicles as well as some property, bad guy tries to shoot good guy while he’s driving, intense hand-to-hand combat scene involving punching and kicking and hitting people with metal objects, fighting results in smashed glass and other property damage, dead body of man is found and implies his neck was snapped by an assassin, assassin also attempts to inject poison in the hero’s hospital IV drug supply and kills two nurses by snapping their necks (one on screen, one off screen), shoving bystanders out of the way, explosion, and a suicide; strong sexual content includes brief and hazy flashbacks of married sex scenes in the memory of lead character, in bed and in shower, plus sounds of sexual activity coming through the wall in another room; nudity implied but both male and female are shot mostly from the shoulders up; two characters overhear another couple having sex on the other side of the wall and it's played for laughs; light social drinking in a couple of bar and cocktail party scenes; brief smoking and drug references when one character tries to make it look like another character died of an overdose; and, hero deceives his way to uncover a plot against him and to survive numerous assassination attempts, one character is a former East German Communist secret policeman who speaks proudly of his past, although his involvement was 20 years ago, but he sacrifices himself to help the hero thus ultimately doing a heroic thing, when lead character learns of his actual past and many violent actions that were part of it, he does not show remorse but simply gets back into fighting mode, and, one character takes cyanide and dies by suicide near the climax of the film.

UNKNOWN is a refreshing throwback to the best Hitchcockian thrillers, in which a relatable Everyman is thrust into a terrible situation and must find the inner strength and cleverness to find his way back out.

Dr. Martin Harris, played by Liam Neeson, and his wife Elizabeth, played by January Jones, go to Berlin for an important botany conference. Martin quickly finds he has to race back to the airport after forgetting a vital briefcase with classified information. He goes back so quickly that even his wife doesn’t know where he went. Then, when he suffers a four-day coma after a taxi accident, Martin finds that his wife claims she doesn’t know him, another man (played by Aidan Quinn) is claiming to be him, and he can’t remember what secrets he was bringing to the conference himself.

Martin turns to his cab driver (Diane Kruger) and a former East German secret policeman to help him figure out the mystery. As he does, the movie spirals ever more complexly through a series of shocking twists.

UNKNOWN marks the second foray into action-hero status for Neeson after the superb thriller, and MOVIEGUIDE® Award winner, TAKEN, in 2009, and again he fits the role very well. In fact, UNKNOWN’s complex storyline stays mostly in the realm of plausibility, and the performances and writing of the characters across the board are three-dimensional. Director Juame Collet-Sera does a good job building a low-boil tension to heightened levels at key moments in the movie, while he and the screenwriters masterfully use amnesia and the stranger-in-a-strange-land motif to keep both Martin and the audience on their toes for the entire running time.

Neeson’s character is shown as trying to do the right thing and find his wife to help her against all odds. When his true nature is revealed, he tries to reform his life, although he has to defend his life by killing some bad guys. In the end, a couple people are ready to sacrifice their lives to help him and he gets to return the favor for one of them.

Because there are some mystery elements and plot twists, it is not always clear in what direction UNKNOWN is headed, including who the bad guys are. The movie also has some foul language, action violence and strong, but brief, sexual references. Extreme caution is advised.