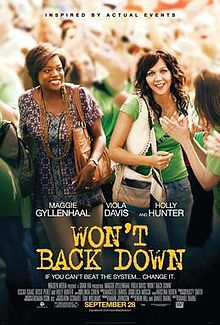 WON’T BACK DOWN is about a loving mother and a passionate teacher fighting to change their failing public school. Jamie Fitzpatrick is tired of moving her daughter from school to school to give her a better education. Jamie wants to get her daughter in Nona’s class, because she loves her students and helps them progress, but there’s not enough space. Nona and Jamie discover they transform the failing school. However, they have to battle the deceitful teachers union to do it.

(BBB, CapCapCap, ACACAC, C, L, A, M) Very strong moral worldview with very strong free market, anti-statist values and an emphasis on doing what’s right even if it is hard and sacrificing to do the right thing; four obscenities, two profanities; no violence; no sex, just kissing; no nudity; alcohol use; no smoking or drugs; and, separation of mother and father, unions cause trouble and create lies and build fear in people, and mentions of luck and wishing.

WON’T BACK DOWN is about a loving mother and a passionate teacher fighting to change their failing public school. WON’T BACK DOWN has a great free market message about fighting for perfection when the government encourages mediocrity.

Jamie Fitzpatrick is tired of moving schools, fighting for her daughter to be in the best school and not being able to give that to her. The current school her second grader, Malia, is attending has an F rating. Also, most of the children do not make it to college. On top of that, Malia has dyslexia and is in one of the worst classes with a teacher who only cares about her tenure and union benefits. Jamie really wants to get her daughter in another teacher’s class, a teacher who loves her students and helps them progress, but there isn’t enough space.

Meanwhile, the good teacher, Nona, has a son in need of a great teacher at his own school. Jamie approaches Nona about her situation. The two realize the biggest problem with the government school system is the teachers union, and the fact most teachers are just working for tenure, not to teach.

After doing some research, Jamie and Nona find out that they themselves can completely change the school for the better by making it a charter school. The school they would create would not allow for unions or tenure, and the teachers would have to teach because they loved the children and wanted to help the children grow. The problem is, they have to get 19 other teachers on board and many parents.

Hearing that Nona and Jamie are taking a stand, Evelyn, who works for the Pittsburgh teacher union, starts to fight them. Evelyn and her boss, Arthur, see Nona and Jamie as a threat to the union system. They start to make up lies and pass out fliers. Evelyn tries to stop Nona and Jamie from rebuilding the school. She even tries to bribe Jamie. However, Jamie and Nona see through her schemes. They fight harder and harder to reclaim the school in order for the children to learn and progress.

WON’T BACK DOWN has a very strong free market, anti-statist message about how people should fight for their rights in the midst of government mediocrity. The movie shows that people can make a difference, that things can change even if they are failing, and that passion is key to making it happen. WON’T BACK DOWN has a very strong moral worldview showing it’s best to do what’s right no matter how difficult. It also stresses parents loving their children and fighting for what’s best for them. There is, however, a separation between a married couple, which is sad.

WON’T BACK DOWN has a great message, but the movie is all about the message. There aren’t enough moments of laughter and relief from the message. WON’T BACK DOWN could have been even more powerful if it had focused more attention on providing viewers more entertainment.

Rent or Buy WON'T BACK DOWN: