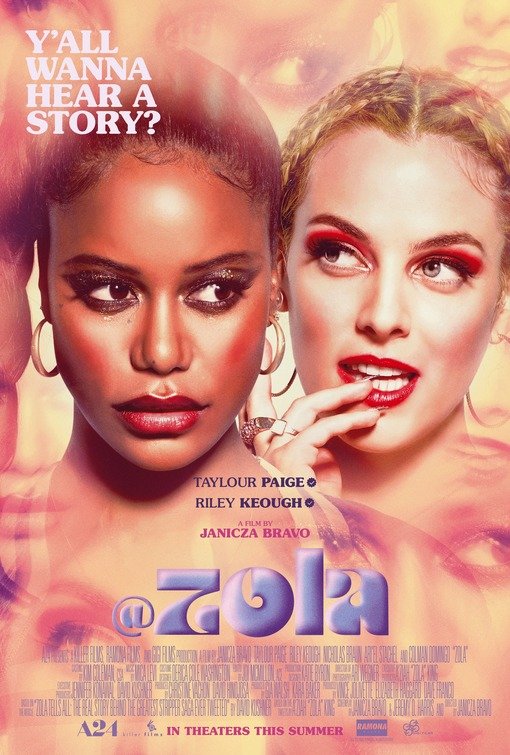 ZOLA is a comic thriller recounting the “mostly true” story of a wild road trip where a black stripper finds herself in danger of being prostituted. The movie is based on a 148-Tweet thread from 2015. A black stripper named Zola meets a white stripper named Stefani, who invites Zola on a road trip to Florida to strip for the weekend. She’s going to Florida with her roommate, X, and his best friend, Derek. X turns out to be a mean thug while Derek is a hopeless idiot who has unrequited love for Stefani. Zola realizes Stefani is prostituting herself, and X is her pimp, and they want to force Zola into being a prostitute too.

The filmmakers try to play this travesty for dark laughs, which is how many of the original Twitter thread’s readers took it. However, ZOLA is a thoroughly corrupt, dispiriting slog through 90 minutes of depravity. It has some of the most unsympathetic, reprehensible characters ever committed to film. ZOLA also has constant foul language, explicit nudity, extreme lewd content, and two blasphemous scenes referring to Jesus.

(PaPaPa, ACACAC, Ho, LLL, VVV, SSS, NNN, DD, MM):
Dominant Worldview and Other Worldview Content/Elements:
Very strong pagan, immoral worldview with two blasphemous Anti-Christian scenes referring to Jesus, and a brief implication that there’s sexual attraction between two women at the start of their friendship
Foul Language:
At least 231 obscenities (mostly “f” words with some “s” and “b” words), 27 strong profanities, some “n” words, and obscene gestures
Violence:
Man shoots another man in the neck that leaves him gasping for life and blood shooting out of his neck, women are grabbed by the neck and threatened repeatedly, it’s implied that a man violates a woman with his hand, and a man attempts suicide by jumping off a ledge but survives with a bloody head wound that’s played for laughs
Sex:
Multiple scenes of a woman prostituting herself with all types of sex acts depicted, discussed or implied, some lewd dancing, and one woman helps another woman get paid more for sex acts, rather than helping her get out of the situation or showing her disapproval of it.
Nudity:
Several closeup shots of men’s genitalia and rear male nudity, several shots of women’s rear nudity and cleavage-exposing skimpy tops and pasties for females, both in sexual situations and without, including rear ends shown from above while they urinate before the camera lingers on the color of each of their urine
Alcohol Use:
Alcohol use
Smoking and/or Drug Use and Abuse:
No cigarette smoking but some marijuana smoking and drug references; and,
Miscellaneous Immorality:
Lying, cheating and manipulation.

ZOLA is a comic thriller recounting the “mostly true” story of a wild road trip where a black stripper finds herself in danger of being prostituted, which was a viral sensation on Twitter in 2015. ZOLA is a thoroughly corrupt, mostly dispiriting slog through 90 minutes of depravity, with some of the most unsympathetic, reprehensible characters ever committed to film.

ZOLA is based on a 148-Tweet thread from 2015 where a black stripper named A’Ziah King (nicknamed Zola and played by Taylour Paige) recounted a wild weekend that transpired after she met a white fellow stripper named Stefani (Riley Keough), who invited her on a road trip to Florida to strip for a weekend. Stefani is what is euphemistically called “white trash” and tries to “talk black” at all times, telling Zola she’s going to Florida with her roommate X (Colman Domingo) and his best friend, Derek (Nicholas Braun). The two women are portrayed as having a sexual attraction to each other initially, though it’s never discussed or acted out.

Zola finds that X is a mean thug who slips in and out of British accents while Derek is a hopeless idiot who has unrequited, utterly clueless love for Stefani, who takes advantage of him at every turn. When they arrive in Florida, they wind up not at a glamorous strip club, but at a ratty hotel where Derek is ordered to stay behind while X takes Steph and Zola out with him in menacing fashion.

Zola soon realizes that Steph is prostituting herself, and X is her pimp, and that she has tricked Zola into coming along with the expectation that Zola can be forced into prostitution as well. Zola has to think fast to avoid being sexually abused in this way, but also teaches Steph to charge men more than the $100 she usually does.

When Steph winds up making $8000 for the night, X is astounded and throws some of the money at Zola as his way of thanking her. However, he leaves Steph without a single penny for all that she went through. He tells her that her reward is in having food and a roof over her head, makeup and clothes. The weekend events start to get dangerously out of hand when a rival pimp kidnaps Stephani, Zola finds herself ever closer to danger. Can she manage to survive the weekend without being raped or killed?

That is the core premise of ZOLA, and in reading that one can imagine just how degrading and dispiriting it is to sit through for anyone with a sense of morality. Yet writer-director Janicza Bravo tries to play much of this for dark laughs, which is how many of the original Twitter thread’s readers read it. However, what might have been amusing reading for some is ruined here by seeing actual women portraying characters in severe distress.

Steph and Zola call each other the “b” word relentlessly throughout the movie, both as terms of casual affection as well as in anger and frustration. Multiple early scenes show both of them wearing only G-strings with fully exposed buttocks as they jiggle them in closeup for the cameras during their “dances,” while wearing skimpy tops.

The prostitution scenes are where the movie really sinks to the depths of depravity. Stephani is subjected to a montage of men who show full frontal and rear nudity, as she is shown having various types of sex with all of them. Most of the sex acts are implied, cutting away as she’s about to start or showing her face only, but there are also numerous closeups of men’s faces as they receive pleasure. The worst moment comes when the two women find themselves in a room with four men wishing to have group sex with them, and Stephani starts pleasuring herself for them before the scene cuts away.

While Zola thinks fast and avoids prostituting herself, her greatest danger finds herself getting her face licked and sexually assaulted in graphic fashion. This is how the movie treats its heroine.

No one learns a lesson from any of this, other than Zola hopefully having the sense to never leave town with strangers again. There are literally no morals in the story or moral to the story, just that bad people wind up treated terribly by even worse people if they don’t have any common sense to avoid dangerous situations.

ZOLA also contains a pair of horribly blasphemous scenes. In one, a strip club manager leads her dancers in crude prayers to Jesus to bring them lots of well-endowed black men with lots of money to spend. In the other scene, Stephani talks directly to the audience saying she “f” word with Jesus, not in a sexual way, but as her crude way of saying she’s on good terms with Him.

ZOLA was a highly acclaimed movie at the Sundance Film Festival, the nation’s top event for independent films. Six women were involved in producing, writing and directing it, and most mainstream critics are lavishing praise upon it as a feminist “triumph.” If women are ever to attain equality in society or the arts, the women who are already in power need to provide opportunities that uplift rather than degrade their fellow females. Everyone involved in making ZOLA should be ashamed of themselves, but especially the women who oversaw its production.