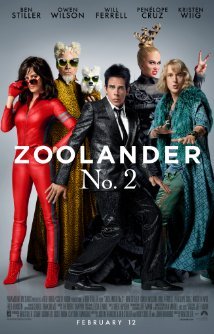 In ZOOLANDER 2, male supermodels Derek Zoolander and his friend Hansel come out of retirement so Derek can find his estranged young teenage son, Derek Junior. Derek lost custody of his son after his wife died in a tragic accident, and Derek couldn’t figure out how his wife made spaghetti soft. Derek and Hansel find out someone’s killing off celebrities, including Justin Bieber, and trying to kidnap Derek’s son. The villain behind the plot turns out to be Mugatu, the man who tried to brainwash Derek into assassinating the Malaysian president in the first movie.

ZOOLANDER 2 suffers from the same problem affecting too many big-budget sequels. It’s no longer fresh and rarely as funny as the first, but tries to make up for it by being bigger and louder. That said, there are many funny jokes taking potshots at the fashion industry and today’s culture. However, there’s also a lot of lewd jokes plus plenty of foul language. ZOOLANDER 2’s pagan worldview is accompanied by some moral, redemptive elements centering on the comic protagonist’s attempt to reconcile with his son.

(PaPa, HoHo, Ab, C, B, O, LL, VV, SS, N, A, MM) Strong pagan worldview with attempted human sacrifice by movie’s villain and some strong comical references (sometimes lewd but often implied) to homosexual and bisexual activity, a couple jokes about bestiality and being in a regular orgy relationship among 11 or so other men and women, an Anti-Semitic joke about an Hasidic rabbi engaging in sexual perversion, mitigated slightly by some Christian, biblical, moral elements and references including references to Christianity, Adam and Eve in the Garden of Eden, forgiveness, reconciliation between a father and his estranged young son, jokes exposing some of the silliness in the fashion industry, jokes exposing a creepy transgender character who spooks even the two main characters who are otherwise rather libertine about sexual immorality, and jokes about the kind of super-thin female models the fashion industry prefers, plus title character gets advice from his dead wife who comes back as a ghost or phantasm of some kind; 11 obscenities (including one “f” word), five strong profanities, three light profanities, Susan Boyle flips off the paparazzi photographers, hotel is made of recycled human waste and named Palazzio de Caca, and man spits out bad tasting food that makes him gag; strong and light comical violence includes assassin riddles Justin Bieber’s body with bullets, two people on motorcycles chase Justin Bieber in the streets at night, Justin Bieber snaps the neck of one of the motorcycle assassins as he climbs a brick wall and does other stunts to elude his would-be killers, bomb explodes onto man, and a bunch of glitter comes out of the bomb (it’s a real “glitter” bomb), knife plunges into man’s cheek, knife plunges into man’s clothed thigh, some sadomasochistic outfits, building collapses in newsreel footage from TV newscasts, two scantily-clad women fight while men watch, villain plans to sacrifice teenage boy; strong comical references and innuendoes about having regular orgies with a group of about 11 people, references to homosexuality and bisexuality, a couple jokes about bestiality (in one joke, man says, “I wasn’t through with that hippo”), two men mention sex they had with dead mother of 14-year-old to the teenager, some sadomasochistic outfits but mostly in the background, men get aroused when they see a really beautiful woman who works for Interpol’s fashion division (it’s a real “Fashion Police”), jokes that man’s orgy partners are all pregnant (including the men), villain and his girlfriend kiss open mouthed in one scene that’s played for laughs, etc.; upper male nudity and partial rear nudity in at least one scene, plus some images of female cleavage; some alcohol use; no smoking or drugs; and, kidnapping, lying, deceit, villain gets really angry, and comic hero at first rejects his estranged son because he’s gotten fat.

ZOOLANDER 2 follows the male supermodel with the goofy name as he tries to stop the villain from the first movie, who’s trying to sacrifice Zoolander’s estranged young teenage son. Too overblown at times, ZOOLANDER 2 has a strong pagan worldview with homosexual and bisexual undertones, many other lewd jokes, many funny jokes about the fashion industry, and lots of gratuitous foul language, mitigated by some Christian, moral elements.

The movie opens with pop singer Justin Bieber being chased and eventually shot dead by two mysterious people on motorcycles. Before he dies, Justin appears to make the “blue steel” pose made famous by supermodel Derek Zoolander 20 years ago. Justin’s death is the latest in a series of celebrity murders and selfies. The murders and photographs have attracted the attention of Interpol’s top fashion cop, Valentina, played by Penelope Cruz. Yes, she’s a member of the real “Fashion Police.”

Cut to “Northern New Jersey,” which looks like the Alps in Europe. There, in an isolated cabin, Derek Zoolander has withdrawn from the world after his new building for children “who don’t read good” collapsed and killed his wife. Shortly thereafter, Derek also lost custody of their son, Derek Junior, because Derek Senior couldn’t figure out how to make spaghetti soft like his wife used to do.

Billy Zane comes knocking on Derek Zoolander’s door, bringing a job offer from Alexanya Atoz, a bizarre-talking fashionista in Rome. She makes the same offer to Derek’s former friend, Hansel (Owen Wilson), who lives somewhere in the “Uncharted Malibu Territories,” which look like the Sahara Desert.

In Rome, Zoolander and Hansel learn from Valentina, the Interpol fashion detective, that someone has been murdering celebrities. Eventually, the trail leads to Mugatu, the villain from the first movie played by Will Ferrell, who’s still in fashion prison. Mugatu tricks Derek into helping him escape. Derek learns that Mugatu plans to kidnap his son and sacrifice him so that Mugatu and other fashion designers can drink his blood. It’s all part of an intentionally nonsensical plot about the Fountain of Youth, the Garden of Eden and the world’s first supermodel, a guy named Steve.

Even for fans of the first movie, ZOOLANDER 2 suffers from the same problem affecting too many big-budget sequels. It’s no longer fresh and rarely as funny as the first, but tries to make up for it by being bigger in scale and ever louder. In this case, the souped-up effects, sometimes pounding musical score and nonsensical plot combine to form an assault on the senses that might make viewers think they had a better time than they actually had, with the movie dissipating in appeal shortly after it’s over.

Admittedly, there are some funny moments taking potshots at the fashion industry, today’s culture and even transgender political correctness, but too many jokes contain tasteless sexual material that’s inappropriate for the movie’s target audience of teenagers and young adults. ZOOLANDER 2 is also excessive for adult viewers as well. Despite some perceptive jokes in one scene about a transgender character that point out just how stupid transgender politics have become, the movie accepts other sexual perversions as being normal.

That said, the movie’s pagan, immoral worldview is mitigated by some Christian, moral elements. Throughout the movie, Derek Zoolander is trying to reconcile with his young teenage son, Derek Junior. He feels guilty about causing the death of the boy’s mother and losing custody of Junior, but it turns out that the villain, not Derek, caused both situations. As with the first movie, Ben Stiller’s impression of a narcissistic, vacuous male model is pretty funny and almost carries the movie.