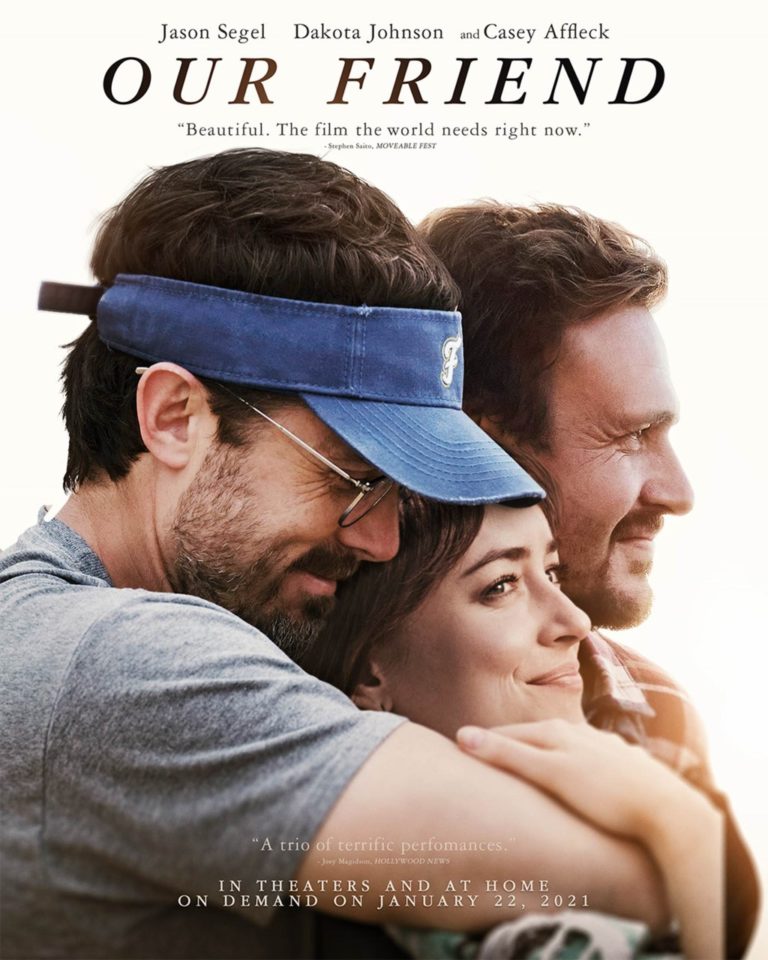 OUR FRIEND is a drama inspired by a true story. Dane Faucheux, a former theater tech operator, moves from New Orleans to Alabama to be with his friends, Nicole and Matt Teague, and their two daughters. In 2012, Nicole is diagnosed with cancer. Her diagnosis impacts the Teague family drastically, including Matt and Nicole’s two young daughters. Dane helps the family navigate this trying time with resolve and compassion, but that doesn’t always mean things are easy for everyone.

OUR FRIEND is a sobering but very touching, powerful and well-acted movie about people sticking together when times are tough. It has a strong moral worldview, with an emphasis on caring for friends as one would a family member. The husband chooses to move past infidelity for the good of his family. The friend drops everything to be a constant support to his friends. There are some light Romantic elements such as a terminal cancer patient making a bucket list. MOVIEGUIDE® advises extreme caution for OUR FRIEND because of excessive foul language, conversations about intimate matters and other content designed for older viewers.

(BB, Ro, Ho, LLL, VV, S, N, A, D, MM):
Dominant Worldview and Other Worldview Content/Elements:
Strong moral worldview with an emphasis on caring for friends as one would a family member and sticking together when times get tough, husband chooses to move past his wife’s infidelity for the good of his family, a close friend drops everything to be a constant support system to his two married friends despite naysayers, several “I love you” and apologies for bad behavior, some light Romantic elements as a cancer patient makes a bucket list as she nears death, and a joke about homosexual sex
Foul Language:
29 obscenities (including some “f” words), five strong Jesus profanities, 14 light profanities, man sits on toilet, and excrement is discussed
Violence:
Man faints and hits the ground, a mention of committing suicide, but the character doesn’t go through with it, young girl gets burned by an iron on accident, wife hits her husband, husband breaks wine glasses in rage, man breaks into a hotel room door
Sex:
Stand-up comic talks about phone sex using some innuendo, discussion of a past adultery, a joke about homosexual sex, and a man grabs a woman’s rear end in a bar
Nudity:
Married couple appears in the shower together, but their private parts are obscured
Alcohol Use:
Social drinking
Smoking and/or Drug Use and Abuse:
Brief smoking and mention of cigarette breath, but no drugs; and,
Miscellaneous Immorality:
A joke is made about holding men up by their private parts, marital discord and lying.

The movie begins in Fairhope, Alabama in 2013. A married couple in their bedroom discuss how to break some solemn health news to their two daughters who are on the front porch with their friend, Dane.

Cut to New Orleans thirteen years earlier. Matt works for a local paper while Nicole prepares for a theater performance. Viewers see a younger Dane, who’s part of the tech crew and gets romantic advice from Nicole. Later, Nicole introduces Matt to Dane at a bar just before Matt gets a big career break that he will get to cover news in the Middle East alongside the U.S. troops.

The movie continues to jump back and forth in time but clearly states where and when events take place. For instance, in 2012, viewers learn that Nicole gets diagnosed with cancer, which leads to a decline in her physical health. Nicole and Matt leave New Orleans behind and move to Fairhope, Alabama to be closer to Nicole’s family. Dane, who has little ties to NOLA, moves to Fairhope with them and begins to lend a helping hand.

Nicole and Matt have two young daughters who spend a lot of time with Dane, especially as Nicole’s health declines. Dane takes them to and from school, to the park and helps with their sick dog, who ironically has to get put down because of cancer. Meanwhile, viewers see that Matt chose to forgo an affair while traveling for work, but Nicole didn’t escape the same temptation, although viewers only hear about it after the fact. Matt and Nicole stay together, but with cancer always on the table, emotions run high from time to time.

When Nicole’s health takes a turn for the worst, a hospice nurse, Faith Pruett, comes to take over some of the heavy lifting that falls on Dane and Matt’s shoulders. Faith applauds both men for doting on Nicole in her final hours, but it’s clear that letting go will prove challenging for everyone who played a role in Nicole’s life.

OUR FRIEND is based on an article written by real-life writer Matt Teague, which garnered national interest in 2015. It’s a sobering but very touching and powerful movie about people sticking together when times are tough. Although the timeline hops back and forth, it’s not confusing to track because the movie clearly states where and when events occur. Casey Affleck (MANCHESTER BY THE SEA), Jason Segal (BAD TEACHER) and Dakota Johnson (BAD TIMES AT THE EL ROYALE) are an interesting trio but perform well together in what might be some of their most emotionally powerful work.

OUR FRIEND has a strong moral worldview with an emphasis on caring for friends as one would a family member. A husband chooses to move past infidelity for the good of his family, and the friend, the subject of the movie’s title, drops everything to be a constant support, despite naysayers. There are light Romantic elements such as a terminal cancer patient making a bucket list. MOVIEGUIDE® advises extreme caution for OUR FRIEND, because of excessive foul language, conversations about sex and other content designed for older viewers.