"A Ping-Pong Throwback to the Eighties" 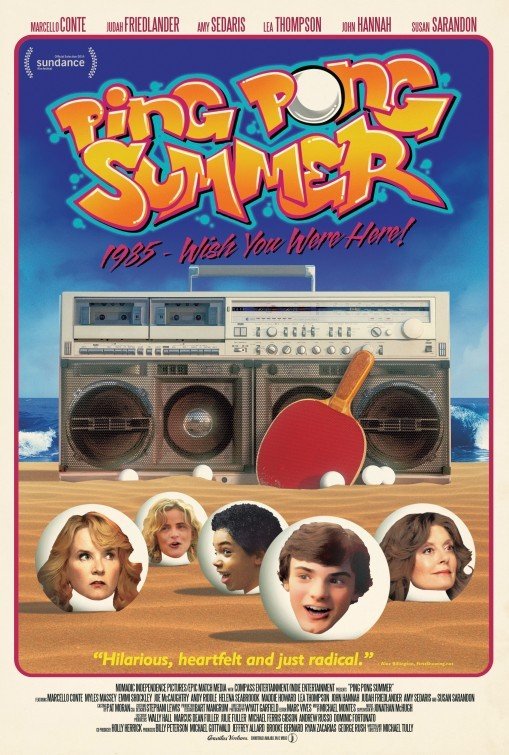 PING PONG SUMMER is a comedy set in the 1980s in Ocean City, Maryland. Vacationing teenager Rad, a hip-hop and ping-pong aficionado meets Teddy, an African American his age, who’s also on summer vacation. The two share their love for hip-hop and ping-pong, becoming best friends. Rad also meets Stacy and is instantly smitten, but she’s the girlfriend of Lyle, an over-privileged teenager who belongs to the richest family in Ocean City. When Rad can’t take Lyle’s bullying anymore, he challenges Lyle, a table tennis superstar, to a ping-pong faceoff. Rad gets some help from an unexpected source to battle Lyle.

PING PONG SUMMER is fun and entertaining. It captures the spirit and feel of the 1980s with plenty of nostalgia. Some of the dialogue, Teddy’s rapping and Rad’s dancing are a bit cheesy, but this could also be viewed as authentic behavior by un-cool kids trying their best to be cool. PING PONG SUMMER has a light moral message about standing up to bullies. However, caution is advised for older children due to a few obscenities and underage drinking.

(B, L, S, N, AA, MM) Light moral worldview as one character stands up to another’s bullying; a few spoken obscenities, some obscene gestures, toilet humor, and racial remarks; no violence; no sex, but couples tongue kiss, in-laws kiss; upper male nudity in a few instances, girls in swimsuits; alcohol use, with minors drinking; no smoking or drug use, but girl puts powdered candy in her punch giving the illusion of her using cocaine; and, racial/ethnic remarks, daughter disrespectful to father, bullying, gossip, dysfunctional family.

PING PONG SUMMER is a comedy that takes place in 1980s in Ocean City, Maryland. Rad Miracle and his family have driven to Ocean City for summer vacation. His father is a frugal state trooper who drives a police car to their vacation bungalow to save on gas. Upon arrival, Rad is warned about their “creepy” next-door neighbor, a strange recluse.

Rad soon meets Teddy, a chatty and friendly African American his age, who is also on summer vacation. The two share their love for hip-hop and ping-pong while becoming best friends. Rad also meets Stacy and is instantly smitten, but she is the girlfriend of Lyle, an over-privileged teenager from the richest family in Ocean City. Lyle makes it completely clear he wants Rad to stay away from Stacy. He also bullies Rad and Teddy just because they’re different, from out-of-town and not filthy rich.

When Rad can take no more of Lyle’s treatment, he challenges Lyle to a table tennis dual. Lyle, having already brutally beaten Rad and humiliated him in front of Stacy, is sure this is an easy win. Rad and Teddy have no idea how Rad will beat Lyle that Saturday, but Rad feels proud to have stood his ground.

As reality sets in that Rad has no idea how to beat Lyle, he looks for his neighbor. When she doesn’t answer, he goes around to her garage/shed to look for her there. Typical of any nosy teenager, he cannot resist looking under a tarp covering something. He discovers trophies and that his neighbor was a hotrod, bowling and ping-pong champion!

When Rad finds the recluse Randi Jammer (Susan Sarandon) at the dock with a fish she just caught, he asks if she’ll help him with his table tennis game. Randi gives Rad a few pointers and tells him to keep the distractions out of his head and find a way to relax and regroup during his game. Will Rad be able to handle the pressure?

PING PONG SUMMER is very entertaining. Having grown up in Ocean City, Maryland in the eighties, MOVIEGUIDE®’s reviewer attests that the scenery, shops and spots of the Boardwalk in the movie were spot-on and filmed on location. The throwback to the 1980s is also well done. The thick eyeliner and eye shadow, hairstyles, zipper pants and other clothes, and boom boxes with cassette tapes bring a pleasant authenticity. Although some of the dialogue, Teddy’s rapping and Rad’s dancing are a bit cheesy, this could also be viewed as an authentic performance by un-cool kids who are just trying their best to be cool. A caution is advised for older children due to a few obscenities (including the sister giving the middle finger), some racial remarks and a scene with minors Lyle and Stacy drinking alcohol and kissing.

PING PONG SUMMER has a light moral worldview as Rad stands up for justice against the snobby bullies, Lyle and Dave. The movie makes a point of exposing some of the racial polarization and stereotypes of the times. For example, Lyle and Dale make several negative racial remarks to Rad and Teddy. Overall, however, PING PONG SUMMER is a nostalgic coming of age comedy that made me smile.