"Scientific Achievements Can Be Both Good and Bad" 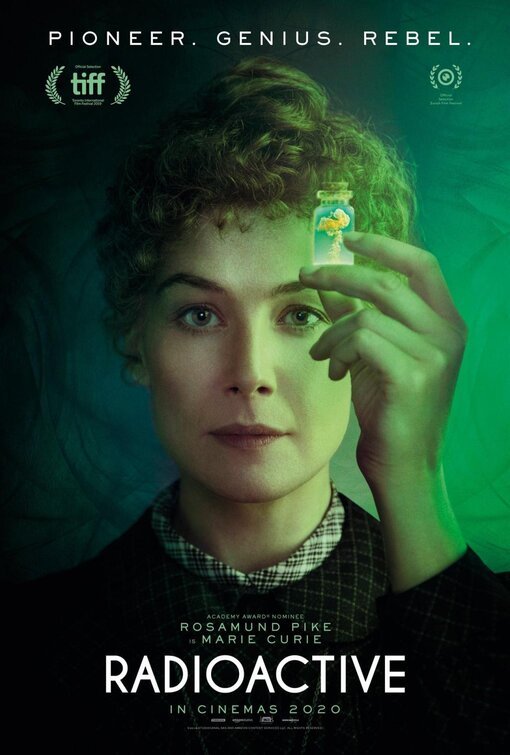 RADIOACTIVE is a new biography of the celebrated career of female scientist Marie Curie, who, with her scientific husband, Pierre, discovers two new elements and the principle of radioactivity. After meeting in 1893, Marie meets Pierre Curie. He becomes interested in both her and her work, which involves research on uranium and X-rays. They get married, have two daughters and win the Nobel Prize in Physics in 1903. However, their marital bliss is cut short when Pierre suddenly dies in an accident. Also, unknown to them, their work on radium and X-rays is slowly poisoning Marie.

RADIOACTIVE is a well-acted, nicely directed drama. Rosamund Pike gives an award-winning, empathetic performance as Marie Curie. However, the drama is interrupted by several scenes from the future about the atom bomb, Chernobyl and cancer treatments using radioactive isotopes. RADIOACTIVE celebrates the strong marriage between Marie and her husband, Pierre, but has a strong humanist worldview otherwise. Also, it contains scenes of war, nuclear disaster, atomic explosions, implied marital sex, implied adulterous sex, and brief nudity. So, MOVIEGUIDE® advises extreme caution for the scientific biography RADIOACTIVE. The good news is that the movie contains no obscenities nor profanities.

(HH, Fe, FRFR, C, B, Ab, V, S, NN, A, D, M):
Dominant Worldview and Other Worldview Content/Elements:
Strong humanist, slightly feminist and amoral worldview about the celebrated careers of Marie Curie and her husband, Pierre, with some nods to the false philosophical, metaphysical views of scientism and spiritualism, mitigated slightly by some light positive references to Christianity, the strong marriage between the movie’s two lead characters, children are celebrated, and some compassion is shown for wounded soldiers, which leads to the development of some mobile X-ray machines for the medics treating the soldiers in the field, plus some brief Anti-Semitism occurs but it’s implicitly rebuked
Foul Language:
No obscenities and no profanities
Violence:
Woman slaps a couple men, coughing man dies when he gets run over by a cart, sick man coughs up blood a couple times, two birthing scenes, brief war scenes of soldiers on battlefields, young woman shows her mother some World War I amputees to get her support or mobile X-ray machines on the front lines, and wounded soldiers and injured Chernobyl victims are shown in two hospital scenes
Sex:
Implied adulterous sex when a widow sleeps with a married man and the man leaves his wife for her but returns to wife when their affair creates a public scandal, woman is accused of speaking frankly about sex and she takes a scientific approach to it that flouts traditional and biblical, social, religious, and moral convention, two scenes of implied marital sex includes some kissing and implied sexual nudity
Nudity:
Upper female nudity and rear male and female nudity when married couple swims naked in a lake, images of upper male nudity
Alcohol Use:
Some alcohol use
Smoking and/or Drug Use and Abuse:
Some smoking but no drugs; and,
Miscellaneous Immorality:
Sexism and bigotry but rebuked.

RADIOACTIVE is a new biography of the celebrated career of female scientist Marie Curie, who, with her scientific husband, Pierre, discovers two new elements and the principle of radioactivity, but gets sick because her work involved working with dangerous radioactive substances. RADIOACTIVE is a well-played, engrossing drama, but the drama is interrupted by several scenes from the future about the atom bomb, Chernobyl and cancer treatments using radioactive isotopes and is marred by references to Madam Curie’s atheist skepticism, plus some sexual references and brief nudity.

The movie opens in 1934 when Marie Curie, who’s become increasingly ill, suddenly collapses. As she’s wheeled down a hospital hallway, she starts experiencing scenes and people from her life.

Cut to 1893. In quick succession, the movie introduces Marie’s first encounters with French scientist Pierre Curie and her conflict with a Professor Lippmann at the University of Paris, who’s let her work in an industrial lab he runs. Viewers learn that Marie is actually Polish by birth, but moved to Paris with her older sister and changed her first name from Maria to the French version, Marie.

When Professor Lippman ejects Marie from his lab for being too demanding and complaining too much, Pierre offers her lab space in his lab for his students at the institute where he teaches. Both had read a scientific paper that the other had written and are equally impressed. However, Pierre becomes more intrigued by Marie’s research on uranium and X-rays. Eventually, he asks Marie to marry him, she agrees, and they have their first of two daughters, Irène (“Eh-wren”). Their work produces the discovery of two new elements, polonium and radium, and they coin the term “radioactivity.” They also discover that radium can destroy tumor-forming, diseased cells fatser than healthy cells. Unknown to them at the time, however, their hours of working on radium and its effects, including Marie’s later work on X-ray machines with wounded French troops during World War I, is slowly poisoning their bodies.

In 1903, Pierre is awarded the Nobel Prize for Physics for their discovery of polonium, radium and radioactivity. When Pierre protests that Marie should share the Prize with him, the Royal Swedish Academy of Sciences agrees.

Marie and Pierre have another daughter, Eve, in December 1904. However, tragedy cuts short their marital bliss in 1906 when, during a heavy rain, Pierre has a coughing fit and is accidentally run over ad killed by a horse-drawn carriage on the streets of Paris.

Of course, Marie is devastated by this tragedy, but she eventually recovers and goes on to new heights of scientific and medical achievement. Despite that, she undergoes a controversy when her year-long affair with a married man is publicly exposed in 1911. That same year, she receives a second Nobel Prize, this time in chemistry, the only woman to receive two Nobel Prizes.

As the movie summarizes the rest of Marie Curie’s life, a couple flashbacks show how she lost her Catholic faith when her mother suddenly died when she was young. The movie also includes brief scenes from the future about the development of the atomic bomb, the nuclear bomb dropped on Hiroshima during World War II, the Chernobyl disaster, and an attempt in the late 1950s to shrink a little boy’s cancer tumor using a radioactive isotope.

RADIOACTIVE is a well-acted, nicely directed drama. Rosamund Pike gives an award-winning, empathetic performance as Marie Curie. Like most biopics, the movie condenses the events of the subject’s life, but it appears to be fairly accurate overall. However, the movie does conflate a major speech her husband made in June 1903 at a major scientific institute in London with the Nobel Prize speeches in December 1903. Contrary to the movie, Pierre never went to Sweden to give the 1903 Nobel speech. They both had declined to go because they were both too busy. It was actually the British institute which, although it honored both Marie and Pierre’s accomplishments, didn’t allow Marie to give a speech in London because she was a woman. The movie’s dramatic conflation regarding the Nobel Prize speech seems designed to enhance the drama behind the sexism Marie experienced for being a female scientist. The movie also gives the impression that Pierre’s interest in spiritualism and seances were religious, but, reportedly, it was only scientific because Pierre thought that some spiritualist experiments and seances might reveal something scientifically about magnetism.

RADIOACTIVE celebrates the strong marriage that developed between Marie and her husband, Pierre. However, the movie has a strong humanist worldview otherwise. One scene shows Marie expressing her belief that there’s no afterlife. In another scene, she says that she’s a “lased Catholic.” Pierre was also an atheist, but the movie doesn’t deal with his beliefs, other than his fascination with possible scientific discoveries from the activities of some spiritualists. However, after Pierre’s sudden death, a distraught Marie encounters a woman from the spiritualist community that Pierre consulted and emotionally pleads with her to help her talk to her dead husband again.

This emotional scene shows that atheism ultimately offers no hope at all for human beings. Also, the movie’s presentation of Marie’s affair with the married man estranged from his wife shows that atheism also can’t offer a solid moral foundation for decisions. Otherwise, however, the movie promotes the false religion of “scientism,” which is the atheist belief that “the hard sciences are the only or at least a vastly superior knowledge of reality compared to other disciplines” (J. P. Moreland, SCIENTISM AND SECULARISM: LEARNING TO RESPOND TO A DANGEROUS IDEOLOGY (Wheaton, Ill,: Crossway, 2018), p. 205). The statement that “science is the only reliable test for truth” refutes or contradicts itself, and is therefore necessarily or inherently false because the statement is itself not a scientific statement. It is a statement ABOUT science, and, hence, subject to the basic laws of logic, the study of which is epistemology, a major field of study and knowledge in philosophy and theology. The belief that science is a “vastly superior” knowledge of reality, which Moreland calls “weak scientism,” is no better because it still contends that science is “the most authoritative sector of human knowing” (Moreland, p. 71). As such, it assumes, with no evidence (or at least no solid convincing evidence), that materialist, amoral science by definition is more authoritative and more plausible than any other field of knowledge, especially philosophy, theology and biblical studies, and that materialist, amoral science is by definition the only way to live one’s life.

In addition to its humanist, materialistic worldview and the two instances of revisionist history cited above, RADIOACTIVE contains scenes of war, nuclear disaster, atomic explosions, implied marital sex, implied adulterous sex, and brief nudity. As a result, MOVIEGUIDE® advises extreme caution and recommends parents discuss the differences between atheism, scientism and Christianity with their older children, whether or not they take the time to see this movie, either separately or together.