"Do Not Bear False Witness" 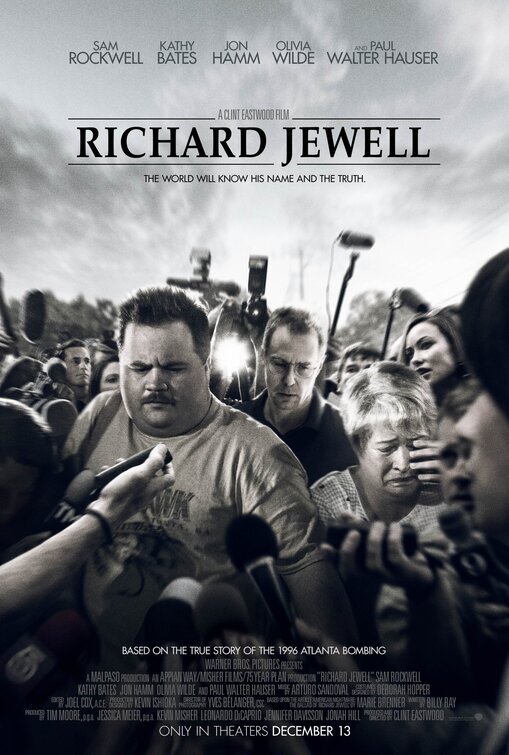 Clint Eastwood’s new movie RICHARD JEWELL is about the security guard falsely accused of planting a bomb at the 1996 Summer Olympics in Atlanta, GA and the lawyer who defended him. In 1986, Richard Jewell befriends a lawyer named Watson Bryant. Ten years later, Richard is struggling to have a law enforcement career. After several unsuccessful jobs, he ends up as a security guard for the 1996 Olympics in Atlanta. Richard saves hundreds of people when he uncovers a bomb. He’s labeled a hero, but the FBI and the news media turn on him and make him the prime suspect. So, he turns to his lawyer friend Watson for help.

RICHARD JEWELL is brilliantly made. It has humor, suspense, drama, and deeply moving, heartfelt scenes. The acting by Paul Walter Hauser as Richard Jewell and Kathy Bates as Richard’s mother is terrific. RICHARD JEWELL tells a powerful human story and tells an incredibly timely story about seeking justice and the dangers of Big Government and Big Media. Sadly though, RICHARD JEWELL has way too much foul language, including some annoying, unnecessary strong profanities.

(BB, PPP, ACACAC, Ho, LLL, VV, S, A, D, M):
Dominant Worldview and Other Worldview Content/Elements:
Strong moral worldview promotes justice with a few appeals to God and very strong positive content supporting the due process guaranteed every American citizen in the United States Constitution when a man is falsely accused of a horrible crime and must fight against the tyrannical powers of government bureaucrats who deceive him and try to trick him and against an unscrupulous “news” media, plus references to homosexuality when the government and the press falsely accuse the title character of working with his alleged homosexual “lover” to plant a deadly bomb and the man denies he’s homosexual two or three times
Foul Language:
At least 73 obscenities (about 40 or more “f” words), 11 strong profanities using GD or the name of Jesus Christ, 10 light profanities
Violence:
Strong violence when a bomb suddenly explodes at a public concert, and people are thrown back by the blast and injured by it and by some nails planted in the device (people are lying on the ground after the blast, some of the bloody wounds are shown, and the disorientation from the blast is shown)
Sex:
No depicted sex, but it’s implied a couple leaves a bar to go to man’s lodging to fornicate, a woman journalist, using lewd language, seduces an FBI agent in the bar, and some light homosexual references
Nudity:
No nudity
Alcohol Use:
Brief alcohol use
Smoking and/or Drug Use and Abuse:
Brief smoking but no drugs; and,
Miscellaneous Immorality:
Man is falsely accused of a horrible crime, and his reputation is strongly tarnished, overzealous reporter participates in the false accusation in a reckless manner, federal FBI agents deliberately deceive a possible suspect and try to trick him, but they set off alarm bells in the man’s mind.

Clint Eastwood’s new movie RICHARD JEWELL is about the security guard who was falsely accused of planting a bomb at the 1996 Summer Olympics in Atlanta and the lawyer who defended him. One of the best dramas of the year, RICHARD JEWELL is brilliantly acted and directed, with an incredibly timely warning about the dangers of Big Government and Big Media, but there’s way too much foul language, including many annoying, unnecessary profanities.

The movie opens in 1986, 10 years before the Olympics. Richard Jewell is a supplies clerk for a legal firm. One day, he hears a young lawyer in a cubicle swearing over the phone. He looks into the cubicle to see who it is and gets embarrassed because he’s afraid the man will think he’s snooping. However, the lawyer, Watson Bryant, is bemused by Richard’s embarrassment. He’s also surprised to learn that Richard noticed Watson was low on some supplies and took the liberty of filling up his desk drawers with the supplies. Not only that, but some empty candy wrappers in the trash showed Richard that Watson likes Snickers candy bars, so Richard also left some Snickers bars in Watson’s desk.

The two men become office friends. Watson learns that Richard is training to work in law enforcement someday. In fact, Richard is so gung ho about it that he’s memorized many police procedures and criminal laws. About two years later, Richard says goodbye to Watson because he’s gotten a job as a deputy sheriff nearby. Watson hands Richard some money for all the candy and asks Richard not to be a jerk like other police officers.

Cut to Richard now working as an outside campus security man. Richard’s been fired from his sheriff job. Now 34, Richard seems to have forgotten his promise to Watson. He’s harassing two male college students for drinking in their dorm room. The students complain to the college administration about Richard’s behavior, and the college president fires Richard for that and other offenses, such as pulling students over on the way TO the college.

In 1996, Richard’s still living with his mother, Bobi, and is set to work as a security office at Centennial Park, where some music stars will entertain people attending the Olympics plus Atlanta citizens who aren’t attending. The park is named Centennial because it’s the 100th Anniversary of the modern Olympic era. “I’m still working in law enforcement,” Richard assures his mother, and perhaps himself.

The first night, Richard’s mother comes to the park, because she wants to see Kenny Rogers perform. Everything goes well, and Richard makes sure his mother has a good time.

The second night, however, a man leaves a backpack under a bench near the tower where cameramen are recording the concert. Moments later, Richard has to roust some drunken young men who are busting bottles behind the tower. After some initial complaining, the men agree to leave, but as they pass the bench, they discover the backpack and tip it over. Richard stops them from fooling with the backpack and fetches a police officer. The officer takes a careful look at the backpack, which has fallen under the bench, and discovers three pipe bombs in the backpack.

Richard and the other police officers start to clear the crowd away from the bench, but the bombs suddenly explode, killing one person and injuring 111 more. A Turkish TV reporter rushing to the scene suffered a heart attack and later died. In the aftermath of the blast, Richard Jewell is declared a hero. He even gets a call about a book deal.

The possible book deal prompts Richard to call his lawyer friend, Watson Bryant. Watson tells Richard he’d be happy to help him with the contract for the book deal.

However, a couple days later, the FBI comes up with a profile of a lone bomber. They recall a recent bomb case where the bomber turned out to be the man who discovered the bomb. So desperate to find the villain, they latch onto Richard as the prime suspect for the Centennial Park bombing. That same evening, an unscrupulous reporter for the Atlanta Journal Constitution seduces the FBI agent leading the case into revealing that Richard is their prime suspect.

The same day that the story naming Richard as the prime suspect comes out, the FBI agent tricks Richard into coming down to local FBI headquarters to make a training video. However, Richard’s suspicions are aroused when they try to make Richard play a criminal on the video. They even want him to pretend to sign a confession. At that point, Richard refuses to cooperate any further until he can talk with his lawyer, Watson Bryant. However, it takes several hours for Watson to get the call. By that time, the story about Richard being the FBI’s prime suspect is all over the TV news. However, Richard’s been stuck for hours at the FBI office. Watson finally gets Richard’s messages, and he runs down to the FBI office, where he convinces Richard to stop talking with the FBI.

When Richard gets back home to his mother, he learns about the news stories. Everybody realizes that Richard’s in big trouble. Can Watson convince Richard, who’s been taught all his life to trust the police and others in authority, to stop trusting, talking and cooperating with the FBI?

RICHARD JEWELL is a brilliantly structured movie. It has humor, suspense, drama, and several deeply moving, heartfelt scenes. The acting by Paul Walter Hauser as Richard Jewell and Kathy Bates as Richard’s mother is terrific. They’re wonderfully supported by Sam Rockwell as Richard’s lawyer friend, Jon Hamm as the FBI reporter, Olivia Wilde as the unscrupulous reporter, and Nina Arianda as the lawyer’s assistant, who later becomes his wife. RICHARD JEWELL is one of Clint Eastwood’s very best movies as a director.

RICHARD JEWELL not only tells a powerful human story. It also tells an incredibly timely story about the dangers of Big Government and Big Media. A poster in the lawyer’s office warns people to be more afraid of what government can do to you than what a terrorist can do to you. In addition to warning viewers about the unrestrained powers of the government and the mass media, RICHARD JEWELL is an argument for the United State Constitution’s principles of justice and due process. In this light, the movie’s sort of the inverse of Clint Eastwood’s big 1971 hit DIRTY HARRY, where a mad killer takes advantage of the judicial system to walk the streets as a free man. Both movies, however, show a concern for crime victims. In the case of DIRTY HARRY, it’s the people that the mad killer has murdered and the children he threatens on a school bus. In the case of RICHARD JEWELL, it’s the concern the title character shows for the victims of the unknown bomber in Centennial Park. Of course, in RICHARD JEWELL, the false accusations against Richard Jewell turn him into a victim too. In the movie, Richard stops being a victim when he finally decides to fight back against the injustice coming from the government and the “news” media that’s destroying his life.

Sadly, RICHARD JEWELL has lots of foul language, including many “f” words and at least 11 strong profanities. So, MOVIEGUIDE® advises extreme caution.