"Taking a Musical Stand Against Injustice" 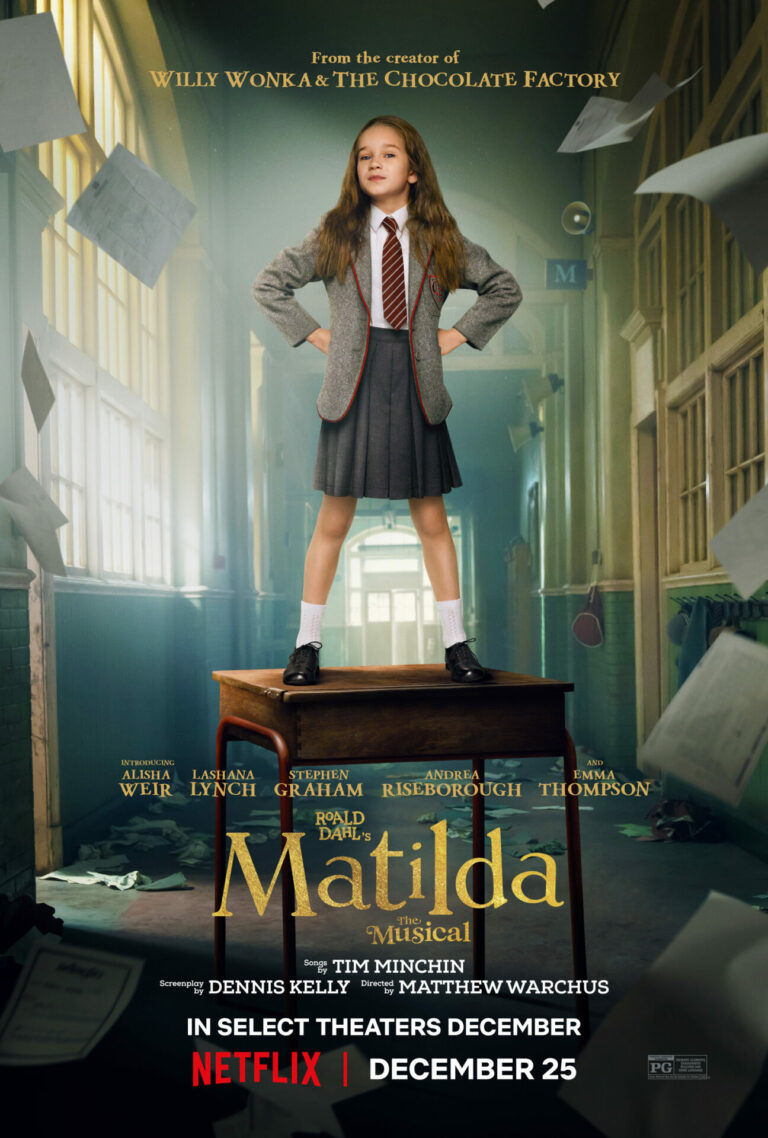 ROALD DAHL’S MATILDA THE MUSICAL is based on the Broadway musical of children’s author Roald Dahl’s children’s book, MATILDA. Matilda is a highly intelligent 10-year-old bookworm whose obnoxious parents are too busy for her. They send her away to a highly oppressive private school that’s run like a prison by Agatha Trunchbull, the mean headmistress. Agatha treats the schoolchildren very harshly, so Matilda leads a revolt among the students. She finds support form a kindly teacher named Miss Honey.

MATILDA THE MUSICAL is a highly original, entertaining movie musical aimed at families. Director Matthew Warchus commandeers large crowds of child actors through sometimes-elaborate dance sequences and choreography. Some of the scenes where the schoolchildren take a stand are riveting and powerful. The movie promotes justice and the miracle of life. Also, one character says, “Two wrongs don’t make a right.” However, the confrontations between the headmistress and the schoolchildren are intense and filmed with a comically dark tone that may frighten younger children. Also, Matilda uses her sudden powers of telekinesis to make the female villain think a ghost is attacking her.

(B, C, O, L, V, A, M):
Dominant Worldview and Other Worldview Content/Elements:
Light moral, Christian worldview where 10-year-old girl leads a student revolt for freedom, justice for children against a cruel headmistress at a school that’s akin to a prison, and the right to be a child, another teacher is kind, a character says, “Two wrongs don’t make a right,” and there are comments about life being a miracle, but girl uses her telekinesis power to move various objects with her mind and convince a female villain that a ghost is attacking her
Foul Language:
One “d” word, two “h” words, and dozens of verbal insults against the title character and other children
Violence:
A couple of comical slapstick scenes where an evil headmistress picks up a girl by her pigtails and rapidly twirls her by her hair and then throws her far across a field (the girl is unhurt), headmistress also pulls a boy’s ears and cruelly stretches them, headmistress frequently threatens the students with a punishment called “The Chokey” which is described to a comically horrible torture device that chokes and otherwise inflicts pain on children, telekinesis powers are used to fling a woman by her hair and across a field and make her think she’s being attacked by a ghost of a dead person from her past
Sex:
No sex
Nudity:
No nudity
Alcohol Use:
Title character’s parents drink alcohol
Smoking and/or Drug Use and Abuse:
No smoking or drugs; and,
Miscellaneous Immorality:
A rude father is disappointed his newborn girl child isn’t a boy, and title character sings often about revenge and does pranks on her evil father such as turning his hair green and gluing a hat to his head, but she comes to peace with him later and frees him of these abuses.

ROALD DAHL’S MATILDA THE MUSICAL is based on the smash Broadway musical of beloved children’s author Roald Dahl’s classic book, MATILDA, about a 10-year-old British girl and child prodigy who rebels against her school’s evil headmistress, who’s more interested in crushing the schoolchildren’s spirits rather than educating them. ROALD DAHL’S MATILDA THE MUSICAL is a highly original, entertaining movie musical aimed at families, but it’s too dark for younger children.

Matilda (Alisha Weir) is a 10-year-old British girl who is a child genius. She reads classic books voraciously and is a math wizard in addition to excelling at every other imaginable school topic. However. she’s stuck living under the roof of her obnoxious, verbally abusive, borderline evil parents, who constantly call her their son just to be mean (there is no transgender advocacy in this).

The parents get so selfish with their time that they pack off Matilda to a highly oppressive private school that’s run like a prison by Agatha Trunchbull, played by Emma Thompson. Agatha is an ogre of a woman who declares her mission is not to educate children but to crush their spirits.

Seeing her classmates’ fear of Trunchbull, Matilda is instantly (and rightfully) rebellious towards her as she tries to defend her classmates from her cruel punishments. Trunchbull declares Matilda a “criminal.” She works especially hard to destroy her spirit after hearing from another teacher, Miss Honey (Lashanna Lynch), about how special Matilda is and how Matilda could be a force of good for the world if only given the chance to thrive.

There is no such chance coming, however. As tensions rise, so do the frequent musical numbers in which great choruses of the children sing in sync about their predicament and desire to break free. Eventually, the students turn Trunchbull’s assessment of them as “revolting” on its head and indeed start an outright revolt against her. Their revolt is powered by Matilda’s leadership and elevated by her ability to use telekinesis to make objects move with her mind.

Can Matilda defeat the evil Trunchbull and free the schoolchildren? Will she come to peace with her parents? And, can she ever find a chance to reach her shining potential?

MATILDA is a highly original, audacious, entertaining movie. Director Matthew Warchus commandeers large crowds of child actors through sometimes-elaborate dance sequences and choreography. He also powerfully conveys the emotional shift in these children as they break free from oppression and embrace their real destinies in life.

Some of these scenes where the schoolchildren take a stand are riveting to watch and jaw-dropping in their power. However, there is a downside to the heavy themes of the movie, especially for young children. For example, the confrontations between Trunchbull and the children are intense and filmed with a comically dark tone that may frighten younger children. Also, Matilda also engages in telekinesis – moving objects with her intellectually advanced mind – which is an occult talent, but it’s used to stop the abusive headmistress.

MATILDA THE MUSICAL is too dark for younger children. So, MOVIEGUIDE® advises caution.

After getting a limited release in a few theaters, MATILDA THE MUSICAL is now streaming on Netflix.