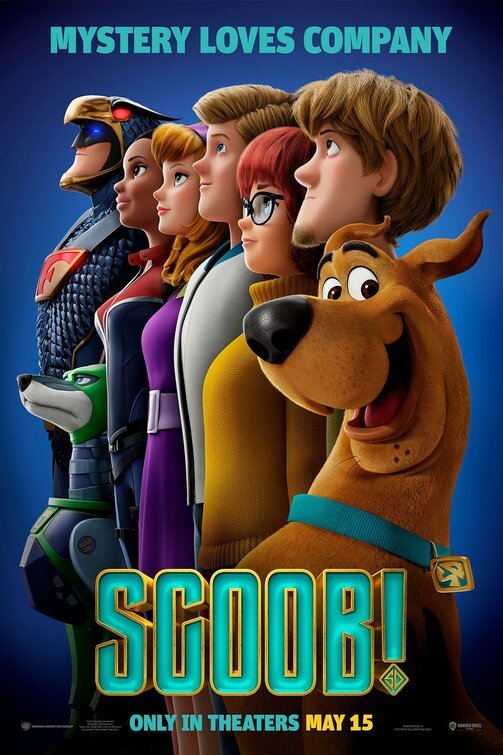 SCOOB! is a new Scooby-Doo feature length animated movie that begins with an short origin story about how Scooby met Shaggy, Fred, Daphne, and Velma. After exposing a fake haunted house hiding stolen loot, the children decide to solve mysteries. Ten years later, Shaggy and Scooby are kicked out of Mystery, Inc. because an investor thinks they contribute nothing to the company. Fred, Daphne and Velma learn otherwise, when Shaggy and Scoob team up with the Blue Falcon to stop a villain trying to get his hands on the treasure of Alexander the Great. The gates hiding the treasure may also stop a monster from getting loose, however.

SCOOB! is an exciting, funny, touching parable on friendship. The jokes and the adventure fly rather swiftly, so the pace never lets up. However, the filmmakers know enough to pause the action just long enough to insert some heart into the story. Ultimately, friendship saves the day in SCOOB!, but the movie also contains some double entendres and lots of cartoon violence featuring scary robots and a scary monster. So, MOVIEGUIDE® advises caution for children.

(BB, CC, FR, Pa, L, VV, A, M):
Dominant Worldview and Other Worldview Content/Elements:
Strong moral, redemptive worldview celebrating friendship with strong elements of sacrifice, but the plot involves revealing the Gates to the mythical Greek Underworld and the spirit of Cerebrus, the giant dog guarding the Underworld, with use of the word “Hell” a couple times
Foul Language:
The word “butt” is used once or twice, one use of crap, there are two double entendres to the “f” word (“No Falcon Around” and “Just Falcon Around,” which refer to two titles of books written by a superhero named Blue Falcon), Shaggy refers to Falcon smoke grenades as “F-Bombs,” a pterodactyl drops a large piece of dung on the ground
Violence:
Strong and light action and comic violence includes robots and flying machine shoot rays and guns at heroes, bowling pins and balls transform into scary robots with teeth and chase two characters, characters are knocked into walls and giant rocks, bicycle cop chases dog and wrecks bike, a man dressed up as a ghost and hanging from a wire flies around to scare some children, but one child cuts the wire, and the man falls in a clump, two characters play whack-a-mole with some robots in an abandoned amusement park, Ferris wheel goes spinning out of control with two characters trapped in one of the cars, man’s amusement park car is flung off roller coasters and hits the ground, and later the man is shown crawling out of a hole, flying machine tries to pull another flying machine, but it loses its grip, villain hits his own long-lost dog on the head, and it bites his leg, Shaggy and Scooby pinch one another to find out if they’re dreaming, and the pinching becomes a game, flying superhero accidentally hits his head on an overhang, giant spirit dog tries to chomp Scooby and a superhero, but the superhero holds its mouth open
Sex:
No sex
Nudity:
No nudity
Alcohol Use:
There’s a joke about the villain’s moustache having traces of 12-year-old Scotch
Smoking and/or Drug Use and Abuse:
No smoking or drugs; and,
Miscellaneous Immorality:
Lying, stealing, kidnapping, jealousy, and a character says you can’t count on friends, but mostly rebuked, plus villain disguises himself as a female policeman.

SCOOB! is a new Scooby-Doo feature length animated movie that begins with an short origin story about how Scooby met Shaggy, Fred, Daphne, and Velma, then shows how they team up with Blue Falcon and Dynomutt to stop Dick Dastardly from opening the Gates of the Hell to retrieve a hidden treasure. SCOOB! is an exciting, funny, touching parable on friendship with lots of heart, but it also contains some double entendres and lots of cartoon violence featuring scary robots and a scary monster.

The movie begins in Venice, California with a young Scooby-Doo stealing a mound of gyros meat from a Greek café along the boardwalk. Hiding from a policeman, Scooby runs into a lonely Shaggy on the beach. They become fast friends when Scooby shares the gyros meat for a sandwich Shaggy has made. When the policeman shows up, Shaggy tells the policeman Scooby is his dog.

On Halloween, two bullies steal Shaggy and Scooby’s bag of candy and throw it inside the local haunted house. Fred, Daphne and Velma help them retrieve the bag. Along the way, they expose the owner of the house who’s been posing as a ghost to scare people away from his stash of stolen goods. The team all decide to start solving mysteries together.

Ten years later, Fred wants to upgrade Mystery, Inc., including his beloved van. He’s gotten an investor, none other than Simon Cowell, the creator of successful musical and talent contest programs. However, Simon says he won’t invest in Mystery, Inc. if the company keeps Shaggy and Scooby because they appear to do nothing but eat. When Daphne protests, “But they’re our friends,” Simon replies, “You can’t count on friendship. When you get into real trouble, friendship can’t save the day.”

Hurt by their friends’ rejection, Shaggy and Scooby retire to their favorite bowling alley. While bowling, they’re attacked by a bunch of shape-shifting robots hiding in the bowling balls and bowling pins. They escape outside, and, just when they’re about to be captured, they’re beamed up to the Blue Falcon’s flying machine. On the ship, they learn that the Blue Falcon has retired and been replaced by his son, Brian, but Brian is rather cowardly and not as smart as Dynomutt, Blue Falcon’s robot companion, and his father’s assistant, Dee Dee. Blue Falcon’s team is trying to stop Dick Dastardly from collecting the three skulls of Cerebrus, the giant dog guarding the Gates to the Underworld.

Another encounter with Dastardly and his robots leads to the information that Dastardly is after Scooby, not Shaggy, because he thinks Scooby is the key to finding the treasure trove of Alexander the Great. Alexander hid the treasure behind the Gates of Hell. Opening the Gates, however, will unleash the spirit of Cerebrus on the world, a real dogpocalypse.

SCOOB! is an exciting, funny, touching parable on friendship. The jokes and the adventure fly rather swiftly, so the pace never lets up. That said, the filmmakers know enough to pause the action just long enough to insert lots of heart into the story. Ultimately, friendship saves the day in SCOOB!, but the movie also contains some double entendres and lots of cartoon violence featuring scary robots and a scary monster. So, MOVIEGUIDE® advises caution for young children.