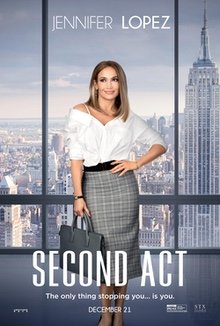 SECOND ACT is a comedy starring Jennifer Lopez as a woman who wants to be a successful business woman, but feels has to lie on her resume. Maya wishes street smarts equaled booked smarts. When she gets the opportunity to work for a big cosmetics company, in the disguise that she has a college degree, she continues the lie to get the job. She’s challenged to making an all-natural skin care product, while another group works on a more traditional line. Will Maya be able to take on this challenge even without traditional training? Can she maintain the secret of lacking the resume the company thinks she has?

SECOND ACT is funny and enjoyable. It gives viewers a whole range of emotions, from laughs to tears. Jennifer Lopez does a great job creating an appealing character. SECOND ACT has positive nods to family and capitalism, and some Christian references, including mentions of prayer. However, the ending has a strong humanist worldview that ultimately rejects the supernatural and contains too much foul language. Also, lying is part of the main theme in SECOND ACT.

(HHH, CapCap, B, C, LLL, S, N, A, MM):
Dominant Worldview and Other Worldview Content/Elements:
Very strong humanist worldview with some strong capitalist elements and some moral and Christian elements that extol family and adoption, with positive comments about Jesus, the Sign of the Cross is made, a Virgin Mary statue is shown, and prayer is mentioned, but the movie ultimately says every person creates their own destiny without any supernatural force guiding them;
Foul Language:
42 relatively light obscenities, one strong Jesus profanity, 12 light profanities;
Violence:
No violence;
Sex:
Implied fornication;
Nudity:
Upper male nudity;
Alcohol Use:
Light alcohol use;
Smoking and/or Drug Use and Abuse:
No smoking or drugs; and,
Miscellaneous Immorality:
Lying is part of the movie’s main theme.

SECOND ACT is a comedy starring Jennifer Lopez as a talented woman who wants a chance to be a successful businesswoman, but feels she has to lie on her resume. SECOND ACT has some positive nods to family, Christianity and capitalism, but it has a strong humanist worldview toward the end that ultimately rejects the supernatural and contains too much foul language as well as light references to premarital sex.

Maya is trying to get a promotion at her job at Value Shop. She has come up with some great marketing ideas for the grocery store, but they aren’t being taken seriously because she doesn’t have a college degree. When turned down for a promotion, she’s distraught and tells her best friend, Joan, she wishes streetwise was valued as much as education wise. The next day Maya gets a call about a job interview at a prestigious consumer products firm. She finds out that Joan’s son created a website and social media accounts falsely claiming that Maya has a very successful background.

Maya goes in for the interview and company officials are so impressed with her background and knowledge of the product, that they hire her. When CEO Anderson Clark tells everyone at a staff meeting that Maya has new ideas on making the skin care product all natural, Anderson’s daughter and the Vice President of the company, Zoe, challenges Maya to make a new product. The two go head to head on a challenge for Maya to make an all-natural skin care, while Zoe makes a more organic skin care, but not all natural.

Will Maya be able to take on this challenge even without traditional training? Also, will she be able to keep up the secret of not having that resume the company thinks she has?

SECOND ACT is a funny, enjoyable movie. The movie clearly is a lower budget movie, but the acting and plot is good enough to support it. Jennifer Lopez does a great job being believable in her character, and Venessa Hudgens has a twinkle in her eye and a dimple on her cheek, as usual. The movie gives viewers the whole range of emotions, from laughs to tears.

SECOND ACT has a few mentions of prayer but finally says that we create our own destiny and there is no supernatural force guiding us. This seems like an unnecessary statement slapped on at the end of the movie, but the entire movie is also based on the fact that Maya has lied about her resume. She feels the guilt from the lie, but the movie doesn’t truly show the ramifications of the lie. Along with this, SECOND ACT has copious amounts of foul language. On a positive note, SECOND ACT shows a positive portrayal of adoption and adoptive parents along with a somewhat capitalist worldview and some positive family elements.