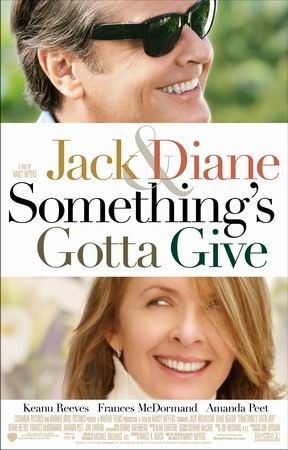 (HH, B, Pa, LLL, V, SS, NNN, A, D, M) Humanist worldview with a careless attitude toward sexual promiscuity, slightly contradicted by its own premise, which has love triumph over promiscuity, and a pagan element where one character says she has to get to a “Zen” place, as in Zen Buddhism; 11 obscenities and 15 light profanities, most of which are Miss Keaton’s manner of speech; hero has several heart attacks and ends up in hospital; depicted fornication and implied oral sex; full female nudity and women in underwear, and rear male nudity, including one extensive shot; alcohol; smoking; and, lying and cheating.

SOMETHING’S GOTTA GIVE is a very humorous romantic comedy about a very unfunny topic: dirty old people who are preoccupied with sex.

The movie starts by discussing older men who date young women. After some clips of stunning young women, the movie cuts to Harry and Marin, an old looking Jack Nicholson with a young twentysomething girl, driving up to Marin’s house in South Hampton. They immediately start unclothing each other. When he goes to get something from the refrigerator, Marin’s mother, Erica, shows up with her sister, Marin’s Aunt Zoe. Everyone is shocked, but Erica decides that all four of them can stay the weekend. When Harry goes back to Marin’s room, Erica and the aunt are commenting on the noises coming from the daughter’s room, when they suddenly they hear a scream. Harry is having a heart attack and has fallen off the bed. They rush him to the hospital. Julian, the doctor (played by Keanu Reeves), says that Harry must stay put, so Erica is forced to take care of Harry at her house.

At first, they don’t get along at all, and things get worse between Erica and Harry when Marin heads back to New York. When Harry walks in on Erica fully naked, he is as shocked as she is. He says he’s never seen a naked old woman. This does not help their relationship. Complicating matters, Julian has eyes for Erica, who’s a famous playwright. Soon, however, as these things go, Harry and Erica are getting along and jump into bed. Evidently, they both have great sex, some of which is displayed because they sleep for eight hours, which neither has done for a long time.

Afraid of commitment, Harry breaks up with Erica, but it’s clear that they love each other. Erica writes a play about their romance. Julian comes on to Erica. So, the question the movie asks is will Julian get Erica or will Harry and Erica get back together?

Although the movie seems to end up in favor of monogamous relationships, it doesn’t seem at all concerned about the promiscuous sex. Erica’s tolerance of Marin’s relationship with Harry seems very unrealistic. Also, Harry’s relationship to these cute girls seems unrealistic, especially considering Nicholson has never been a matinee idol. In fact, throughout much of the movie, Diane Keaton and Jack Nicholson are just too cute to be romantic. The only spiritual reference is Diane Keaton saying she has to get to a Zen place.

Although the acting is unconvincing in some places, the dialogue in SOMETHING’S GOTTA GIVE is very witty. A spoonful of humor will make the immorality go down. The audience was laughing heartily, which makes watching the movie even more discouraging. Of course, this is not the lifestyle of hard-working Americans. It is the lifestyle of the rich and famous who have big houses in Southampton and are blithely unconcerned about other people’s feelings. Having grown up in that milieu, it is not a lifestyle to be emulated.

Distributor: Columbia Pictures/Sony Pictures EntertainmentCONTENT: (HH, B, Pa, LLL, V, SS, NNN, A, D, M) Humanist worldview with a careless attitude toward sexual promiscuity, slightly contradicted by its own premise, which has love triumph over promiscuity,, a pagan element where one character says she has to get to a “Zen” place, as in Zen Buddhism; 11 obscenities, 15 light profanities, most of which are Miss Keaton’s manner of speech; hero has several heart attacks, ends up in hospital; depicted fornication, implied oral sex; full female nudity, women in underwear,, rear male nudity, including one extensive shot; alcohol; smoking; and, lying, cheating.