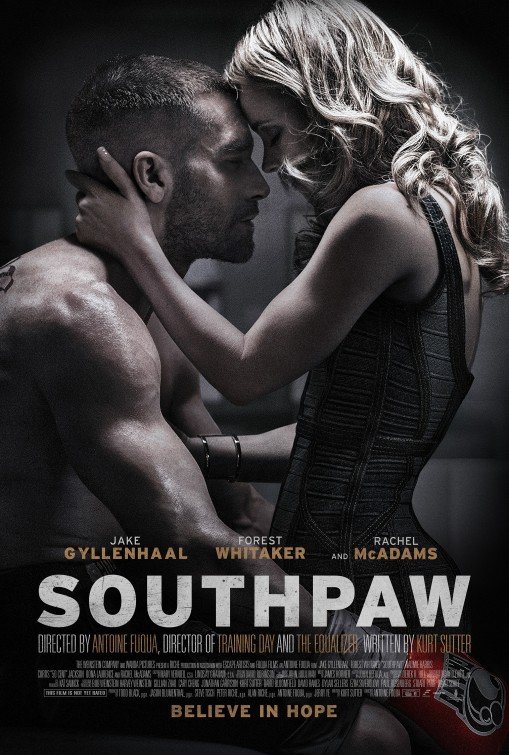 SOUTHPAW tells the remarkable story of Billy Hope, a highly successful boxer. Billy’s life spirals out of control when his beloved wife, Maureen, tragically and unexpectedly dies during an altercation with another fighter outside the ring. Billy finds it hard to cope with his tragic loss. Then, his only daughter, Leila, is stripped away from him by child protective services. Billy gets an offer to regain the championship and regain his daughter. He seeks the help of a local trainer and owner of a boxing gym, to train for the biggest boxing match of his entire career. More is on the line than just the championship.

SOUTHPAW is well done, with some emotionally powerful scenes as the hero tries to regain his daughter by winning a championship bout. Although the acting by some first timers is mediocre, the rest of the cast is outstanding. The cinematography is also captivating. SOUTHPAW has a strong redemptive worldview, with some strong moral elements. However, this positive content is marred by lots of strong foul language and, of course, violent boxing scenes. So, MOVIEGUIDE® advises extreme caution.

(CC, BB, LLL, VVV, S, N, AA, MM) Strong redemptive worldview, with the protagonist fighting to get his life back on track after his beloved wife’s death and losing his daughter to child protective services, plus strong elements of morality come into play half way through the movie, with the protagonist morally changing his destructive behavior for the purpose of setting his life straight and regaining custody of his daughter; at least 107 obscenities (including many “f” words) and one GD profanity; very heavy violence, since it’s a boxing movie, it is expected to have several gruesome, violent scenes, and there is one violent scene that depicts a physical altercation between two entourages that takes place outside the ring that results in a character shot to death; no sexual immorality, but there is a sexually romantic scene that implies sex between a married couple; brief naturalistic nudity, with a several scenes of upper male nudity, and one scene showing a woman in a bathing suit; strong alcohol use and drunkenness, with a couple of scenes depicting characters drinking at a local bar, and a few other scenes depicting drunkenness; no smoking and/or drug use, but the movie creates the sense that the protagonist develops an addiction, or at least a dependence on, of prescription drugs; strong miscellaneous immorality, with a scene depicting the main character seeking revenge for his wife’s death, and a boxing promoter is moved by greed.

SOUTHPAW tells the remarkable story of Billy Hope, a highly successful boxer, whose life spirals out of control after his beloved wife, Maureen Hope, tragically and unexpectedly dies, and his only daughter, Leila Hope, is stripped away from him by child protective services. Billy seeks the help of Titus “Tick” Wills, a local boxing trainer and owner of a local boxing gym, for training for the biggest boxing match of his entire illustrious career.

SOUTHPAW begins with Billy, a former poor, troubled youth, fighting and winning an intense boxing fight. Later, Billy attends a charity event that ends with a physical altercation with a rival boxing opponent who challenges him to a professional fight and insults his wife. Sadly, his wife becomes the victim and is accidently shot to death.

Consequently, Billy becomes heavily distraught, and his life completely falls apart. He develops a prescription drug and alcohol addiction. His anger problem also increases. This leads to the demise of his impeccable boxing career, and his attempt to avenge the death of his wife. All of this eventually results in a judge determining Billy to be inadequate to keep full custody of his daughter. So, she’s placed in the care of child protective services.

Determined to get his life back on track and retrieve his daughter, Billy seeks employment at a local boxing gym. During this time, he tries to reconcile with his daughter, but she wants nothing to do with him. After a promotional fight for charity, Billy’s former boxing manager and promoter, Jordan Mains, approaches him with a huge boxing opportunity, fighting the reigning champion, Miguel Escobar. Escobar happens to be the individual involved in the altercation that resulted in the death of Billy’s wife.

SOUTHPAW is well done. Although the acting of 50 Cent and Rita Ora is mediocre, the rest of the cast is outstanding, including Jake Gyllenhaal as Billy. The cinematography is also captivating.

Even better, SOUTHPAW has a strong redemptive worldview, with some strong moral elements. For Billy, redemption isn’t about the fame and money, but about reconciliation with his daughter and honoring the memory of his wife.

For Christian moviegoers, SOUTHPAW may remind them of Paul’s words to Timothy: “Fight the good fight of faith.” It may inspire believers to continue to fight in life, to “take hold of the eternal life,” and to fight for their families.

That said, the positive content in SOUTHPAW is marred by frequent obscenities and, of course, boxing violence. So, MOVIEGUIDE® advises extreme caution.