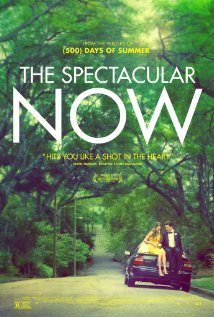 THE SPECTACULAR NOW follows Sutter, a popular teenage boy who has a good job and a popular girlfriend yet hides an alcohol problem. His girlfriend dumps him for being irresponsible. Sutter notices Aimee, a bookish girl who’s socially inexperienced. He invites her to a party and asks her to prom while he’s drunk. Eventually, the two teenagers forge a stronger relationship as he teaches her to drink and swear as a matter of “loosening up” from her mother’s restrictions. However, Sutter longs for his estranged father, and this drives him to drink. Can he overcome his personal demons and keep Aimee?

(RoRo, C, B, LLL, V, SS, NN, AA, MM) Strong Romantic worldview that accepts a teenage sexual relationship, encourages breaking free of “strict” rules and has two teenage characters with strong personal dreams, but there is a solid message of atonement, forgiveness, reconciliation, and redemption away from alcoholism and irresponsibility; at least 70 obscenities and profanities (including some “f” words and strong profanities); brief shocking car accident; depicted teenage fornication and some clothed sexual touching; brief upper female nudity and upper male nudity; underage alcohol use as teenage boy tries to deny and hide his alcoholism but admits to it by the movie’s end, after he visits his estranged alcoholic father an realizes they both have the same problem and after a drunk driving incident that nearly kills someone, but boy gets his new teenage girlfriend to start drinking too before that happens; no smoking or drugs; and, lying to cover up drinking problem, dysfunctional family dynamics, drunk driving, and seduction to sinfulness.

THE SPECTACULAR NOW is a strong, emotionally affecting portrait of a popular teenage boy who slides through life without a sense of responsibility until he falls in love with a bookish girl and realizes he’s an alcoholic. THE SPECTACULAR NOW has a strong pagan worldview. It’s particularly troubling for its acceptance of a teenage sexual relationship, but it has a solid, positive message of atonement and redemption that saves the movie from being completely abhorrent.

The movie follows the story of Sutter (Miles Teller), a popular teenage boy who has his world on a string, with a good job and a popular girlfriend, yet hides a dangerous abuse of alcohol. When his girlfriend dumps him for being irresponsible, Sutter notices Aimee Finicky (Shailene Woodley), a girl who’s bookish and socially inexperienced. He invites her to a party and asks her to prom while he’s drunk. This leads her to take him more seriously than he’s comfortable with or expecting.

At first, Sutter avoids Aimee to make her go away, but eventually he feels empty and drawn to her. The two forge a stronger relationship as he teaches her to drink and swear as a matter of “loosening up” from the tight restrictions of her mother. Both teenagers lack the presence of their fathers, with Sutter thinking his mother is lying to him about his father being a bad person.

Sadly, the young couple becomes sexually involved, which the movie portrays matter-of-factly as if it’s normal. Most of the movie, however, focuses on the couple’s emotional connection, and the encouragement they give each other to stand up for their dreams: Aimee’s dream of going away to college, and Sutter’s dream of meeting his father.

SPOILERS FOLLOW: Eventually, however, the actual meeting with Sutter’s father (Kyle Chandler) is a disaster. Sutter realizes his dad is a hopeless alcoholic who abandoned his family. Depressed and drunk, Sutter fights angrily with Aimee. He tells her to get out of the car on the side of the road, at which point she gets hit by a passing vehicle in a shocking incident that appears to kill her but actually merely breaks her arm.

As a result, Sutter is shaken about his irresponsible way of life. He makes amends with his mother, thanking her for protecting him from his dad and vowing to stop his own drinking. He applies for college, something he refused to do before. In the end, he’s shown going to reconcile with Aimee. Her smile in the movie’s closing shot indicates forgiveness and reconciliation.

THE SPECTACULAR NOW is one of the more moving teenage movies to come out of Hollywood. Teller and Woodley as the two leads are spectacular themselves, with performances that run the full gamut of emotions and which draw the same out of audiences. Kyle Chandler’s performance as Sutter’s father, who is a hopelessly incoherent and morally adrift loser, nearly steals the show and provides the movie with a strong moral lesson on the problems and tragedy of alcoholism.

THE SPECTACULAR NOW takes a strong critical look at teenage drinking. It also has a powerful message about the importance of fathers in children’s lives, including teenagers. Though the male lead is clearly irresponsible, the female lead is more stable and responsible, even though she’s enticed into some immoral, irresponsible actions. She works hard at school and values intelligence. Despite its positive aspects, however, THE SPECTACULAR NOW seems to condone teenage sex, or at least depicts it as part of today’s social norms. The movie also contains plenty of strong foul language and depicted lewd behavior.

Overall, therefore, THE SPECTACULAR NOW is a problematic movie. It could have made its moral points without any graphic content. For example, it’s clear in the Christian movie FIREPROOF that the protagonist has an addiction to Internet pornography, but the movie doesn’t show any salacious graphic details. Of course, THE SPECTACULAR NOW also lacks the overt Christian worldview of FIREPROOF, which clearly shows that the Gospel of Jesus Christ can save us from our sins and transform us into better husbands and wives, and better sons. FIREPROOF may have more of a “preachy” style compared to this movie, but it’s also more spiritually and morally inspiring. As well done as it is, THE SPECTACULAR NOW doesn’t quite measure up.