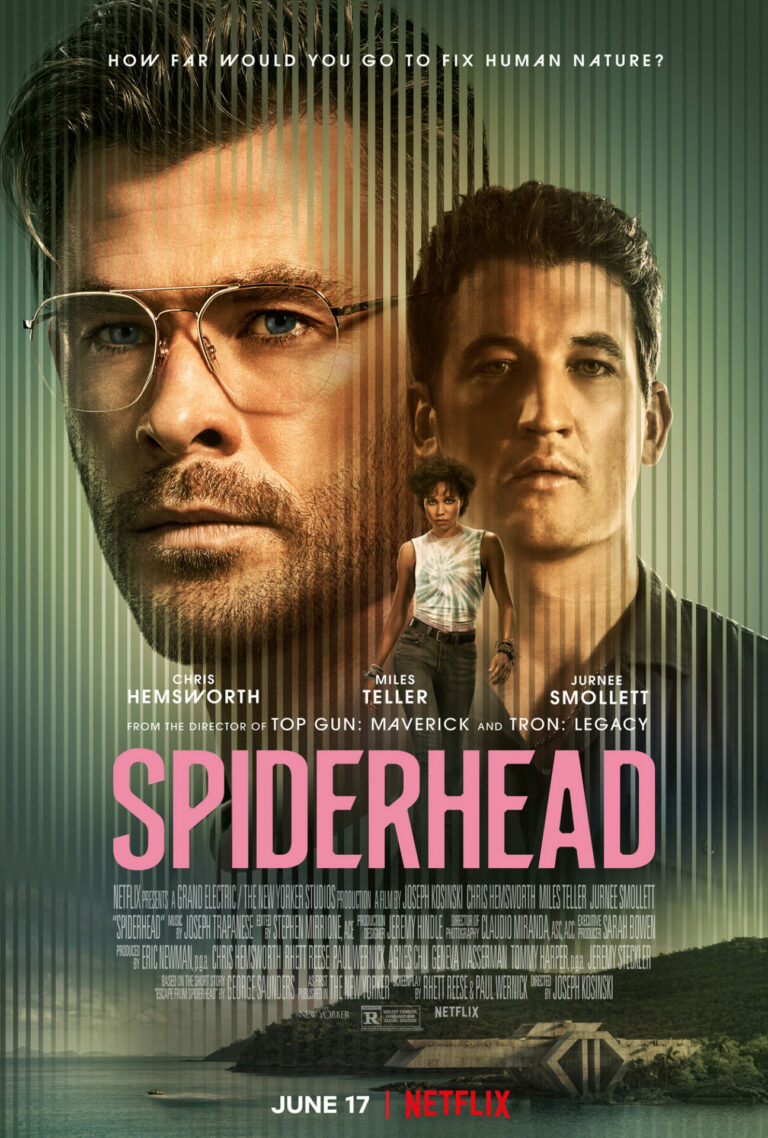 SPIDERHEAD is an entertaining, darkly comic, disturbing, thriller on Netflix. Steve Abnesti is a slick, charming and handsome billionaire pharmaceutical magnate who’s conducting his most radical experiments on his private, Jeffrey Epstein-style island. Steve oversees a private prison where they administer a wide array of dangerous mind-altering drugs to prison convicts who volunteered. However, one convict in the program, Jeff, sees a particularly gruesome end to one experiment and realizes he needs to escape and warn the world about what Steve is doing.

SPIDERHEAD is never boring and has a great soundtrack of bouncy 1970s and ‘80s pop classics creating humorous counterpoint to the onscreen action. The acting performances are also solid. However, SPIDERHEAD has lots of disturbing and immoral content, with two heavy sex scenes, lots of strong foul language and several scenes involving psychotic behavior, including a gruesome suicide. SPIDERHEAD is undeniably riveting to watch. It has an original plot with lots of twists. It also presents interesting questions about the ethics of pharmaceutical companies and the nature of forgiveness and earthly redemption. However, the negative content in SPIDERHEAD is excessive.

(BB, C, Ho, LLL, VVV, SS, AA, DD, MM):
Dominant Worldview and Other Worldview Content/Elements:
Strong moral worldview where a man convicted of drunk driving volunteers for an experimental drug program, but he expresses moral qualms throughout the movie and eventually takes a stand against the program and the movie has a strong moral lesson that one people shouldn’t rely on drugs to express forgiveness and redemption, but that the way to achieve those is through honest personal introspection, plus one scene involving the drug experiments involves a grotesque giant man covered in tattoos who hopes to engage in homosexual have sex with the hero, but the hero refuses
Foul Language:
At least 35 obscenities (including 19 “f” words), one JC profanity, three Jesus profanities, eight GD profanities, and three light profanities
Violence:
Very strong violence in one scene where dangerous behavior-affecting drugs are given to people, who sometimes lash into scary violent screaming fits, with one woman slitting her throat and dying with massive amounts of blood showing, and several strong punching and kicking fights and a car crash involving drunk driving in a flashback
Sex:
Two major scenes of fornication with lots of physical thrusting, movement, shrieking, and moaning while people watch and record the scenes (one scene is somewhat visible to viewers, the other focuses on the woman’s head and shoulders), the sex partners are drugged with a drug that forces them to desire sex and act on it and when the drug wears off, they feel guilty, and in one scene, a grotesque giant man covered in tattoos is hoping to have sex with the hero character, who makes an absolute stand he won’t have sex with a man, and the supervisor relents and calls off the encounter
Nudity:
No explicit nudity, but there’s implied nudity in two scenes
Alcohol Use:
Several flashbacks show the hero getting drunk and driving long ago, with a crash killing a friend and his own girlfriend (this is shown with haunting regret, and the hero’s prison sentence is his punishment for the deaths)
Smoking and/or Drug Use and Abuse:
Experimental mind-altering drugs are forced on convicted prisoners throughout the movie, and two men get “high” by choice off one of the experimental drugs and are shown greatly enjoying it, but the experimental drugs overall are shown and discussed in extremely detrimental fashion; and,
Miscellaneous Immorality:
The villain is constantly deceiving and manipulating people while sometimes joking about the results.

SPIDERHEAD is an entertaining, darkly comic, yet disturbing, thriller on Netflix about a ruthless, deceptive billionaire pharmaceutical magnate who conducts twisted experiments on deceived prison convict, except for one prisoner who decides to fight back. SPIDERHEAD is never boring and has a great soundtrack, with a strong moral lesson about forgiveness, earthly redemption and taking a stand, but it has some strong violent scenes, depicted sex and lots of strong foul language, so its negative content is too excessive overall, despite the movie’s positive lessons.

Steve Abnesti (Chris Hemsworth) is a slick, charming and handsome billionaire pharmaceutical magnate who’s conducting his most radical experiments yet on his private, Jeffrey Epstein-style island. With his right-hand man, Mark (Mark Paguio), he oversees a private prison where they administer a wide array of dangerous mind-altering drugs to prisoners who volunteered to be there due to its lavish accommodations and the misled belief that the experiments will help humanity.

The main prisoner, Jeff (Miles Teller of TOP GUN: MAVERICK) has befriended Steve more than most prisoners and consequently gets more humane treatment. He also has a strong conscience when undrugged, frequently waging concerns and complaints over the experiments. Meanwhile, he’s developing a romance with a fellow female prisoner, Lindsey (Jurnee Smollett).

The crimes that Mark and Lindsey are imprisoned for are not revealed early on in the movie. This lends a sense of intrigue about them. Eventually, though, it’s revealed in flashbacks that Jeff went drunk driving, had a crash and was charged in the deaths of his best friend and girlfriend. Lindsey’s revelation is even more heartbreaking, but it won’t be revealed here because it’s a major spoiler.

Among the things that Steve does while on the drugs include having wild sex with a female prisoner who’s a total stranger to him. While sober, he’s forced to make stark decisions about which prisoners should be injected with Steve’s worst drug, Darkenfloxx, which causes extreme psychotic, violent behavior in those who are injected.

When Jeff sees a particularly gruesome end to one such experiment, he realizes he needs to escape to warn the world about what Steve is doing. Can he manage to save the day? And, can Lindsey stay safe while Jeff makes the attempt?

SPIDERHEAD has lots of disturbing and immoral content, with two heavy scenes of implied sex, lots of strong foul language and several scenes involving psychotic behavior, including a gruesome suicide. However, it’s also undeniably riveting to watch, because it’s an original plot with lots of twists and has some interesting questions about the ethics of pharmaceutical companies, and the nature of forgiveness and earthly redemption.

As the villain, Steve, Chris Hemsworth is almost too charming in the first half, with his smiling and joking serving as distractions from the vile acts he’s committing. In the second half, when his true nature is revealed and menace comes to the fore, his performance is pretty solid all the way. As Jeff, Miles Teller is on the ultimate ride of his career with his heroic role of Rooster in the box office smash TOP GUN: MAVERICK, and he reunites in SPIDERHEAD with MAVERICK’s director, Joseph Kosinski. Teller effortlessly plays an impressive array of emotions here with great skill, while creating a highly sympathetic character in a dark world. Jurnee Smollet as Lindsey is also powerful, especially when she makes the dark revelation about her crime.

SPIDERHEAD has a strong moral worldview overall, with some redemptive elements. The main lesson it teaches is that people shouldn’t rely on drugs to express love, forgiveness or redemption, but that the way to achieve those is through honest personal introspection. (Of course, ultimately, repentance and belief in the Gospel of Jesus Christ are the first steps toward achieving true love, forgiveness and redemption.)

SPIDERHEAD is never boring and has a great soundtrack of bouncy 1970s and ‘80s pop classics creating a humorous counterpoint to the onscreen action. For instance, Jeff’s escape attempt is set to Hall and Oates’ song “You Make My Dreams Come True.” Kudos to Joseph Trapanese for overseeing the movie’s music.

SPIDERHEAD is unquestionably inappropriate for children and teenagers and should only be seen by adults with a strong moral constitution and applying extreme caution. Nonetheless, SPIDERHEAD tells a compelling, though disturbing, story, with some dark comedy.