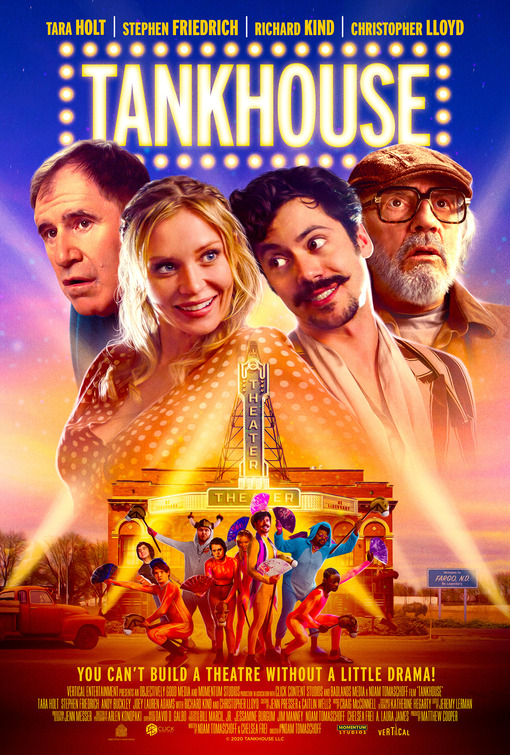 TANKHOUSE is a comical farce about a wacky theater contest in Fargo, North Dakota between two theatrical troupes. Tucker Charlemagne is an avant-garde theatre actor and producer in New York who runs a troupe with his girlfriend, Sandrene. All is going well until one night, a shocked old lady has a heart attack and dies in front of a theatre critic, ruining their show engagement and driving the couple out of town in shame. They end up in Sandrene’s hometown of Fargo, where there’s a contest to own an old movie theater to the best theatrical troupe in town. Tucker is driven to win the contest.

The first half of TANKHOUSE is a little annoying and over-the-top, but the second half is hilarious and touching. Stephen Friedrich’s performance as Tucker is a comical marvel. He steals the movie outright. The rest of the cast is good,. TANKHOUSE has a strong Romantic worldview about art and personal relationships, with some light moral, redemptive themes stressing forgiveness and sacrifice. TANKHOUSE is marred by the non-explicit portrayal of a male homosexual couple, two supporting characters.

(RoRo, B, C, HoHo, L, V, AA, M):
Dominant Worldview and Other Worldview Content/Elements:
Strong Romantic worldview about art and personal relationships, with light Biblical, redemptive principles of forgiveness and sacrifice though faith isn’t mentioned, and some mockery of political correctness and pretentiousness in the theater, and two young men come “out of the closet” and reveal they have a homosexual relationship, but then fight about the coming out twice, and in the end, they’re holding hands and briefly kissing while saying they’re in “real love”
Foul Language:
No obscenities and two OMG profanities
Violence:
A male actor comically pretends to slap a female actor while they’re onstage, and one man jumps out of the crowd to punch the slapper, two men comically fight and one gets punched in the face and knocked down comically, a woman punches a man and kicks him in the groin after he accidentally puts his arm around her
Sex:
Two men reveal they have a homosexual relationship together and fight about it, but they eventually hold hands and kiss and say they’re in love, plus two men have a romantic rivalry over one woman, who has been living together with one of the men
Nudity:
No nudity, but a theater performance has a woman taking off her top, but in the performance one of the other actors places a “Censored” sign in front of her exposed chest
Alcohol Use:
In one scene, the lead acting troupe drinks copious amounts of alcohol, and they all pass out drunk
Smoking and/or Drug Use and Abuse:
No smoking or drugs; and,
Miscellaneous Immorality:
Rival to lead male character, who runs a theatrical troupe, uses a spy to infiltrate the troupe and sabotage it so the rival’s troupe can win a contest.

TANKHOUSE tells the story of a flamboyant but heterosexual theatrical actor and producer and his actress girlfriend, who are run out of New York City in shame and wind up finding new adventures and greater purpose in Fargo, North Dakota. TANKHOUSE is a screwball farce that overcomes too much silliness in its first half to become a highly original and very funny comedy, but it’s marred by a Romantic Non-Christian worldview and a non-sexual portrayal of a male homosexual couple, two supporter characters.

Tucker Charlemagne (Stephen Friedrich) is an avant-garde theatre actor and producer in New York City who runs a troupe with his girlfriend, Sandrene (Tara Holt). All is going well on their artistic terms until one night, a shocked old lady has a heart attack and dies right in front of a theatre critic, ruining their show engagement and driving the couple out of town in shame.

Sandrene is from Fargo and asks Tucker to move there with her and start over. As soon as they arrive, they find that an old movie palace that would be perfect for theatrical shows is about to be given away to the winning troupe in a theatre contest.

Tucker is driven to win the contest. He assembles a ragtag group of performers, including a Swede who speaks hilariously broken English, a blind man who ruined his own eyes by do-it-yourself laser-pointing in an attempt to fix a problem, and two closeted young men who are extremely close friends. There is also a far too shy female stage manager who looks ready to explode at any moment in frustration. They take over a decrepit storage space called the Tankhouse and make it their theatrical home.

The troupe’s main competition comes from another troupe run by Mr. Masterson (Richard Kind), Sandrene’s former high school acting teacher. He ruthlessly wants to win the contest and employs a spy from his team to find out what Tucker’s team is doing and then sabotage them.

Also, Sandrene’s high school boyfriend finds her in town and tries to win her over by making an audition video reel for a major TV audition. Tucker’s jealousy and Sandrene’s waffling feelings for the two men stirs up one final level of comical conflict.

Can Tucker win the theatre? More importantly, can he win back Sandrene’s heart? Will they all survive the nonstop obstacles that seem to befall them?

TANKHOUSE is an outright farce, which is a genre that’s rarely if ever made in recent years. Director/Co-Writer Noam Tomaschoff overcomes an annoyingly over the top first half to deliver an uproarious, occasionally touching second half.

Stephen Friedrich’s performance as Tucker is a comical marvel to behold. He steals the movie outright. His nonstop hilarious facial expressions and ability to deliver numerous speeches with perfectly calibrated condescension is a master class in comic acting. The supporting cast of weirdoes is also top-notch and very funny.

However, TANKHOUSE has a strong Romantic worldview about art and personal relationships, with some light biblical, redemptive content stressing forgiveness and sacrifice. There are also two or three scenes where two homosexual men come “out of the closet,” argue about the way they did it, then kiss and hold hands. Also, the two leads are living together. Aside from that, there’s literally no other lewd or graphic content. TANKHOUSE does have some light comical violence. For instance, Tucker tries to teach a big man how to throw a punch on the stage, but the man ends up actually punching him in the jaw.