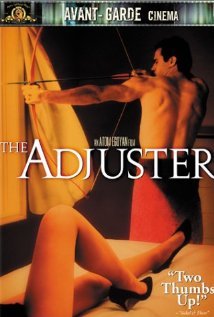 THE ADJUSTER is dreadfully tedious cinematic self-indulgence, a film that snooty critics might describe as "controlled" but which in reality thumbs its nose at even the most patient viewer. Surrealistic, sexually explicit at times but glacial in pacing, this art house denizen will (thankfully) find an extremely limited audience for its pretensions.

THE ADJUSTER is a tedious cinematic self-indulgence. Noah is an insurance adjuster, who responds to calls in the middle of the night, escorting victims to a cheesy motel where they await the settlement of their claims. His care extends beyond providing temporary shelter. Noah routinely beds the women, and in one case, accommodates an aggressive homosexual as well. His wife, Hera, works at some vast censorship agency, where she categorizes the excesses of raunchy pornography. Interspersed between these scenes are the adventures of Bubba and Mimi, a wealthy couple who spend loads of time and money acting out Mimi’s bizarre sexual fantasies. Eventually, Noah arrives home to see Bubba torch himself and the house as well. Thus, the adjuster gets to watch as his own possessions go up in flames.

If this brief synopsis sounds confusing and exasperating, try sitting still for 102 minutes while writer/director Atom Egoyan unfolds this tale at a glacial pace. To add insult to injury for Canadian viewers, THE ADJUSTER represents a fair number of their tax dollars at work. They should demand an “adjustment” on their next income tax return.