THE BANSHEES OF INISHERIN

"Too Dark, Depressing and Morose" 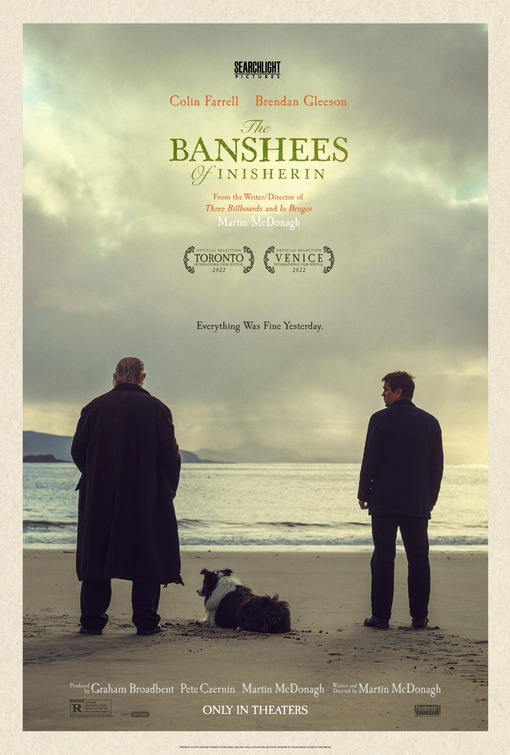 THE BANSHEES OF INISHERIN is a dark comedy set in 1923 on an isolated island off the coast of Ireland. In the story, an older man tells a younger man he no longer wants to be friends. The younger man, Pádraic (pronounced “Por Ick”), asks why. The older man, Colm, says because Pádraic is a dull, boring person, and Colm has better things to do with the rest of his life than talk with him. Pádraic keeps pestering Colm, so Colm tells him he will start cutting off the fingers on his left hand if Pádraic tries to talk to him again.

THE BANSHEES OF INISHERIN has some funny, touching moments. For example, in one scene, Pádraic gives a passionate speech about the importance of being nice. His speech moves Colm, but not enough to change his mind about their friendship. Ultimately, therefore, THE BANSHEES OF INISHERIN comes across as too dark, morose and depressing. Even the younger man’s cute, beloved miniature donkey becomes a victim of their feud. In addition to gruesome violence, BANSHEES also has some strong obscenities and profanities.

(HH, Ab, C, Fe, O, Ho, LLL, VVV, S, NNN, AA, D, MM):
Dominant Worldview and Other Worldview Content/Elements:
Strong humanist worldview in a morose, depressing tale set on an isolated Irish island where solutions to a personal conflict seem totally secular, and references to the people attending Catholic church and going to confessional ultimately seem to have no real positive effect, especially on the menfolk on the island, and on the movie’s two central male characters who have an increasingly bitter feud when the older man, who’s clearly smarter and more intellectual than the younger man, tells his friend that he no longer wants to see him or talk to him because his conversations are just too “dull” and are totally wasting what little time he has left, plus younger man in one scene makes a passionate moral argument against the way in which the older man is treating him (the older man is impressed but ultimately is unfazed), younger man’s independent sister complains that the isolation of the island has driven the men on the island mad, and she decides to leave to live on the mainland, an elderly lady on the island is a witch of some kind, and it turns out that the local police constable has been sexually abusing his adult son for years
Foul Language:
At least 23 obscenities (six “f” words), six Jesus profanities, four light profanities, and many Irish “f” words (“fe**”)
Violence:
Gruesome images of an older man, who plays a fiddle in an informal local folk band, who cuts off the fingers of one hand for a silly reason, the older man’s younger friend burns down the man’s house with him inside because the man refuses to speak to him anymore and lays a huge guilt trip on him (the older man escapes the fire, though), a pet donkey is found dead after trying to eat a severed finger, a couple punches are thrown, and the body of a drowned young man is found, an apparent suicide, and it’s indicated that the young man was regularly beaten and even sexually abused by his father
Sex:
Light verbal references to self-abuse and incestuous homosexual abuse
Nudity:
Image of full frontal male nudity of a naked older man sleeping in a chair
Alcohol Use:
Lots of alcohol use at the local pub and some light drunkenness
Smoking and/or Drug Use and Abuse:
Smoking, but no drugs; and,
Miscellaneous Immorality:
Older man is rather rude to his former, younger friend, who’s perplexed by the older man’s rude treatment and keeps pestering the older man, because he’s unable to leave well enough alone.

THE BANSHEES OF INISHERIN is a dark comedy set in 1923 on an isolated island off the coast of Ireland, about an older man who suddenly tells a younger man he no longer wants to be friends with him because he’s such a boring person and will start cutting off his fingers if the man ever tries to talk to him again. THE BANSHEES OF INISHERIN has some funny, tender moments, but ultimately it comes across as morose and depressing, with excessive foul language, some gruesome images of fingers being cut off deliberately, and a brief scene with a totally naked man sitting in a chair.

The movie opens one afternoon with a dairy farmer named Pádraic, pronounced “Por Ick,” waiting for his friend, Colm, an older man, to come by his farmhouse for their daily walk to the local pub. Colm refuses to go with him, saying they can no longer be friends, but won’t say why.

That night, Pádraic’s sister suggest to him that, perhaps Colm doesn’t like him anymore. So, he confronts Colm at the pub, and Colm tells him that his conversations are just too “dull” and are totally wasting what little time he has left on Earth. Colm says he’d rather spend his remaining years doing more important things than talking to Pádraic.

Sadly, Pádraic won’t leave well enough alone. When he keeps pressing Colm, Colm tells him that, if he keeps pestering him, he’ll cut off one of the fingers on his left hand. That’s exactly what he does when Pádraic keeps trying to engage him in conversation.

The differences between the two men escalates into a bitter feud that leads to attempted murder and more finger mutilations. Meanwhile, Pádraic’s sister comes to the conclusion that the isolation of the island has driven all the men mad.

THE BANSHEES OF INISHERIN has some funny, touching moments. For example, in one scene at the pub, Pádraic gives a passionate speech about the importance of being nice. Colm is so impressed that he says that’s the first time in his life that Pádraic has said anything interesting. Colm remains unmoved, however, and refuses to restore the friendship.

Ultimately, therefore, THE BANSHEES OF INISHERIN comes across as too dark, morose and depressing. Even the younger man’s cute, beloved miniature donkey becomes a victim. In addition to its gruesome violence, BANSHEES also has some strong obscenities and profanities.