"Entertaining, But Not Entirely Truthful or Fair" 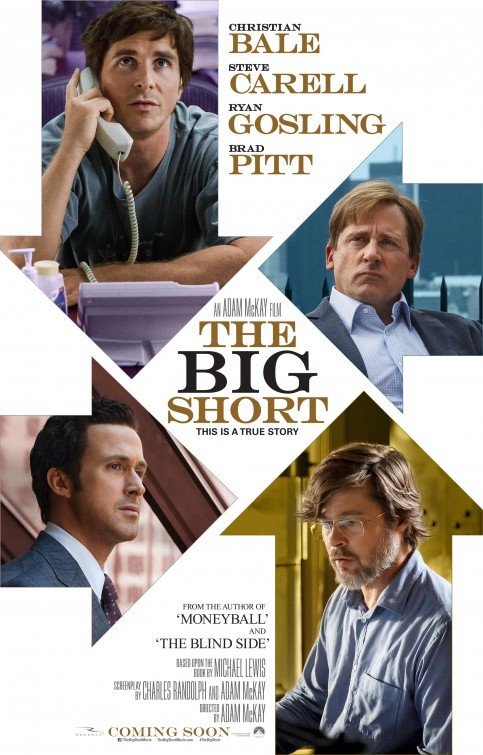 THE BIG SHORT is a comedy-drama starring Christian Bale, Ryan Gosling, Steve Carrell, and Brad Pitt, about some outsiders who saw the massive housing bubble coming and chose to short the banks by betting against them. Their bet that the U.S. economy would fail makes them billions of dollars. As the pressure mounts for these individuals, it becomes increasingly clear that the fraud and lies in the system are a far bigger problem than even they anticipate.

THE BIG SHORT is a fast paced movie that starts off slightly off kilter, but once it allows the audience to catch up, has its enjoyable moments. Surprisingly, THE BIG SHORT nearly avoids falling into the trap of being anti-capitalist propaganda. However, in vilifying the banks, THE BIG SHORT makes two big mistakes. It fails to recognize the federal government’s major involvement in causing the financial crisis and the lack of personal responsibility in having so many Americans take risky loans. Politically, therefore, THE BIG SHORT is a mixed bag, but abundant, gratuitous foul language and a couple lewd scenes add to the movie’s unacceptability.

(PaPa, B, PCPC, AcapAcap, B, Ro, LLL, S, NN, A, MM) Strong mixed pagan worldview with some moral elements of empathy, compassion and statements against greed and fraud, some strong politically correct, anti-capitalist content and implications, and a Romantic, leftist perspective of the financial crisis that doesn’t hold the federal government and American citizens morally responsible for their own actions in driving the financial crisis; at least 110 obscenities (including more than 65 “f” words) and 10 profanities; no violence; some sexual references and descriptions; two scenes in a strip club with upper and rear female nudity, scantily clad women dance in clips of music videos, and upper male nudity; moderate drinking; no smoking or drug use; and, greed, manipulation, fraud, and theft, though not condoned.

THE BIG SHORT is a comedy-drama about a few outsiders who saw the massive housing bubble in 2005 and chose to short the banks by betting against the CDO (Collateralized Debt Obligation). Their bet the U.S. economy would fail makes them billions.

The first person to notice the major discrepancies in the housing market is the eccentric hedge fund manager Michael Burry (Christian Bale), who burrows himself in his Manhattan office, barefoot and in shorts, blasting heavy metal music as he looks over numbers and reports. Far from the typical characteristics of a hedge fund manager, Burry has a special eye for reading numbers. He sees what no one else sees in the housing market, so he shorts it. Word gets around that Burry met with banks to sell him credit default swaps. A young wall street banker, Jared Vennett (Ryan Gosling), overhears Burry’s “crazy” bet and decides to look into it himself.

Vennett also serves as the movie’s narrator, breaking the fourth wall and talking to the audience to help them follow along with what’s happening. At times, celebrities like Margot Robbie, Selena Gomez or Anthony Bourdain suddenly show up to explain to the audience what sub prime mortgages or CDOs mean.

Vennett meets with money manager Mark Baum (Steve Carrell), a hot-headed, mildly depressed man constantly fed up with the world of banking. He tries to convince Baum to invest in the credit default swaps as well. Baum and his team are initially skeptical, but after looking at the numbers, they too follow the suit of Burry.

Finally, two very young investors, Charles Geller and Jamie Shipley, stumble upon the bubble findings. With the help of a retired banker and their friend, Ben Rickert (Brad Pitt), they are able to sit at the tables of the big banks and bet against them.

As the pressure mounts for these individuals, it becomes increasingly clear that the fraud and lies within the system are a far bigger problem than even they anticipate, so some of them begin to worry. They will only profit when the banking system’s mistakes catch up to them, and that will result in the loss of homes and jobs for millions. As we all know, this is indeed what happened in 2007 and 2008.

THE BIG SHORT is a fast paced movie that starts off slightly off kilter, but once it allows the audience to catch up, has its enjoyable moments. While not original thanks to movies like GOODFELLAS and THE WOLF OF WALL STREET, the breaking of the fourth wall infuses a lot of humor and understanding of what’s happening in the story. The acting is admirable, though Steve Carell as Mark Baum is the only one the audience can connect with on a human level in light of his personal struggles and ethical objections with taking advantage of people.

Surprisingly, THE BIG SHORT nearly avoids falling into political anti-capitalistic biases. Even though some of the main characters (such as Jared Vennett) are greedy opportunists, others (like Burry and Baum) are just money managers doing what good capitalists are supposed to do, grow profits for their investors.

However, in vilifying the banks, THE BIG SHORT makes two big mistakes.

First, other than a brief mention that the government itself was acting fraudulently and negligently, the movie fails to recognize that the government was the main instigator. As Peter Wallison, counsel to President Ronald Reagan, points out in his book HIDDEN IN PLAIN SIGHT, “The seeds of crisis were planted in 1992 when Congress enacted ‘affordable-housing’ goals for two giant government sponsored enterprises.” Those enterprises are known as Fannie Mae and Freddie Mac. Essentially, big government wanted more low-income families to buy homes, so they commissioned these banks to make loans to poor families that really couldn’t afford it.

This fact is most disturbingly shown in a scene in THE BIG SHORT, where two lenders brag about taking advantage of poor and even unemployed families by lending them money for nice homes in Florida. Of course, if the government hadn’t sponsored these type of transactions in the first place and ultimately bailed out the banks, this financial crisis probably would not have happened. Of course, a true capitalist wouldn’t conduct business in this manner, because it would be financially suicidal. While the left spins a story of unregulated capitalism, the truth that Wallison proves and other professors and economists have validated is that the government, especially big government, was largely to blame.

This leads to the second problem in THE BIG SHORT. In the end, the narrator takes issue with the banks blaming the immigrants and the poor for the housing bubble. The banks did act fraudulently, and the government should punish theft (including its own theft from the American people), but personal responsibility shouldn’t be ignored. Common sense dictates that, if you’re a low-income family, you logically cannot and should not take loans to buy multiple $600,000 homes just because the banks will lend you the money to do so. Self-government is a key component to the success and DNA of the United States, and stories like THE BIG SHORT often ignore this angle and prefer to shift blame where it probably doesn’t belong. Click here for more information.

The failure to address both of the above problems aligns with the mass media’s typical liberal slant to blame capitalism for everything that goes bad rather than holding the government accountable. That said, what the movie does portray is characters who have empathy for those hurt by the financial collapse and disgust for the fraudulent banks that did take advantage of the system, including receiving bonuses from government’s 2008 bailouts.

THE BIG SHORT is educational and informative for anyone that doesn’t remember what really happened in 2007 and 2008, but it’s worth noting that some knowledge about the government’s involvement will go a long way in fully understanding what happened, and (if we’re not careful) what could very well happen again.

Ultimately, therefore, THE BIG SHORT is a mixed bag. Add to the fact that it has abundant foul language and two scenes in a strip club, the movie falls into the excessive category. So, media-wise viewers will want to avoid THE BIG SHORT.